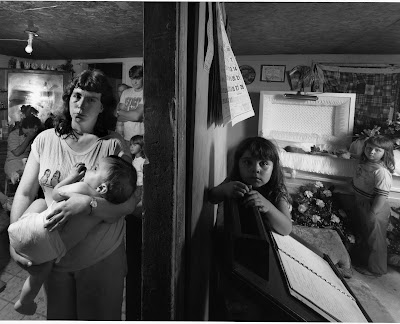 My first screening at this year's Hot Docs fest ended up being an older film: Jennifer Baichwal's 2002 portrait of photographer Shelby Lee Adams entitled "The True Meaning Of Pictures". It was screened as part of a retrospective of Baichwal's work the festival is doing this year and - like last year's "Manufactured Landscapes" (about photographer Edward Burtynsky) - it wasn't solely about the artist. We certainly learn a great deal about Adams from the film, but the central question is in regards to art and its context: is it the artist's responsibility to ensure that everyone knows the proper context and story behind a piece of work?

Adams grew up in the Appalachian mountains of West Virginia and seems to exclusively use the area for his photographs. The beautiful forests and mountainous region is shown to great effect in the opening shot of the film - drifting above the trees like rolling over the tops of row upon row of broccoli in the supermarket. The hollers (valleys in between the mountains that stretch for 10-20 miles at a time) are where Adams goes to work...The deeper one gets into the holler, the poorer the region seems to get and the living conditions become closer and closer to what everyone thinks about when the term "hillbilly" is used. As with any cliche or stereotype, there are grains of truth but typically little else. 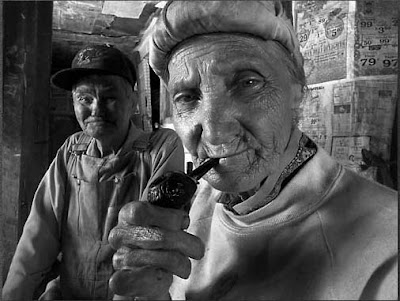 Adams' photography is at times stunning, disturbing and quite breathtaking - and Baichwal highlights it beautifully by cutting all sound from the film as the photos are shown on screen. Mostly consisting of black and white stills of the faces of the people from these ramshackle areas, he employs lighting to great affect giving angelic/demonic appearances to his subjects. And what subjects! Their faces are pock marked and covered with their own hollers - sometimes looking much like the destroyed mountaintops of the mining area of the Appalachians. One of the more memorable people in the film is a handicapped woman who lives with her siblings and elderly father. Though an initial glance would likely leave the viewer shaking their heads in sadness for her, the footage we see behind the pictures shows her to be an incredibly loving and sweet person - hugging her brothers and engaging with Adams himself.

Which is partially the point of some of Adams' critics. They say that not only does he not provide the background of these people in the pictures, but that he emphasizes the "hillbilly" nature of their existence, occasionally stages scenes and completely neglects the rest of the region. They worry that entrenched stereotypes of Appalachians will remain and that Adams does a disservice to these people. There's no doubt that Adams does indeed create his own world by altering lighting and setting scenes, but the people are genuine. They live in these environments, they look the way they do and they like these pictures.

It seems like the critics are placing their own contexts around these photos...The most telling is an interview with a woman who has "made it out of the hollers" and who criticizes a particular picture of a young girl who is a relation of hers. She claims Adams has disgraced her family and wonders why he had to take the picture in front of a broken screen door and why the girl had to look all disheveled and ugly. The picture she refers to is below (clicking on it will give a larger size version of it): 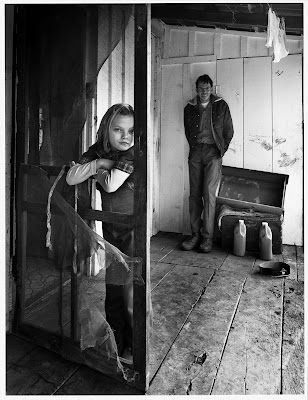 Personally, I think it's a great picture and that young girl is gorgeous. So who is doing the disservice to these people? Adams or that woman who wants to change the context of his art to suit herself ("Why couldn't he just take a pretty picture")?

A great film that allows you to consider what art is and what you think it should be.
Posted by Bob Turnbull at 00:03

These photos are of REAL PEOPLE. Sure, I imagine that some of the pictures are staged, but who doesn't pose for pictures? I was raised up in the hills of Appalachia, Born in Mingo County, West Virginia,in 1956, and raised in Pike County, Kentucky. These are real people with real problems, real values, and real needs, just like everyone else. I think that if you simply look at the reality of life portrayed here, you'll be touched by the simplicity.

Some critics complain about the exploitation & stereotypes. Some dwell on whether the artist has an obligation to put the subjects in context. I've never read a critique of Adams himself, his purpose and his own "issues". He mentions his father's prejudice against these "types" of people he now calls friends. I believe the stark, unpleasantness of most of his pictures is a reflection of the artist. And his explanations of the beauty & dignity he's trying to capture are BS & self-justification. There can be much beauty & dignity shown in a hog-killing; I've seen it in Foxfire books & movie. Adams pix speak of his own poverty-stricken vision.