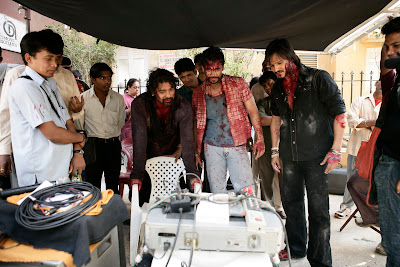 "Shot In Bombay" is ostensibly a behind the scenes look at the making of a Bollywood action film, but it layers on several different storylines that make it so much more interesting and entertaining. Of course it helps when the director of the film within a film is a young ego-driven hot shot whose favourite expression is "Mind blowing", a star who has done over 50 films in the last decade in which he has also been on trial for weapons possession and a script (of the film within the film) that embellishes quite a bit on a re-telling of the true story of a public gun battle between police and gangsters. Sprinkle with liberal amounts of a full-of-himself co-star, a cynical cinematographer and a short history of recent sectarian violence in Mumbai and you've got quite the balancing act. Fortunately, director/editor Liz Mermin handles all these threads quite well.

The action film we see in production is to be called "Shootout At Lokhandwala" and as the documentary starts we get to meet the slew of characters - the star, the villain, the hero cop, etc. It's loosely based on an early 90s standoff between a couple of hundred policemen and a group of gangsters holed up in a residential section of Mumbai. Via flashbacks and current day interviews with the police officers who were involved (including the lead cop - who also gets a small role in the film about those events), we start to learn a bit more about public attitudes at the time and the possibility that this was more of a Dirty Harry scenario of street justice than an actual police intervention. This is actually one of the most interesting sections of the film - were the police justified in doing what they did or should they be considered to be just as bad as the gangsters themselves?

Further flashbacks also give some inkling as to the feeling in the city in the early 90s which eventually led to rioting and what then led to the Bombay Blasts of 1993 (single day explosions that killed around 300 people). Actor Sanjay Dutt is arrested in connection to these bombings because of some weapons that were found in his possession (including an AK-57) and after years of bail hearings, he is finally found guilty of possession and the sentencing hearings take place during his filming of "Shootout At Lokhandwala". Combined with his shooting several other films at once, this tends to impact the production schedule - the director may only get him for a few hours on any given day.

With all this background, we are also treated to the typical day-to-day problems and issues of shooting a Bollywood film and the confusion of making things up as you go. The cinematographer of the film states at one point "This is Indian cinema - you don't go by logic, you go by emotion". He also states in a deadpan voice at another point that "Filmmaking is a waste of time". But far and away the most entertaining of the characters we meet is the young chain smoking director who needs a hit. He thinks he is much funnier, charming and intelligent than he really is and you wonder if he'll be able to hold it all together by the end. There's a very funny scene where he is showing someone how to slap one of the stuntmen and he proceeds to essentially beat the man up - treating him like a punching bag and barely even registering his existence since it's of little or no impact to him. If you are one of the stars though, every scene you do is "Cut. Mind blowing!"

In the end you feel amazed that they managed to finish "Shootout At Lokhandwala" at all and then that people actually went to see its overblown dramatics and heavily romanticized look at cops and gangsters. Hopefully "Shot In Bombay" and its wide ranging cast of characters finds an audience as well - there's got to be some minds out there ready to be blown... 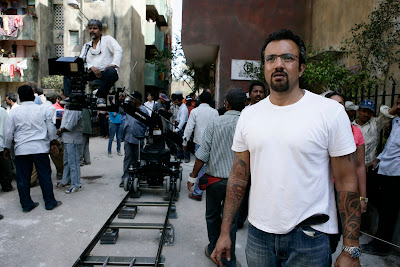