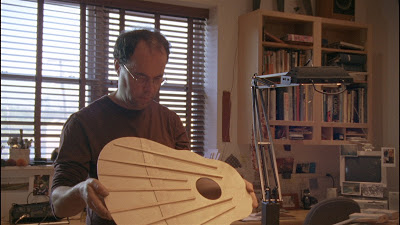 Flip Scipio builds guitars. One at a time. Very carefully.

The film "Talking Guitars" gives us a better idea of why Flip does what he does and why he spends so much time carefully bending and shaving the wood he uses for these custom built musical instruments. Even more light is shed on the craftsman through interviews with some of his famous customers (Jackson Browne, David Lindley, Paul Simon, etc.). Fortunately, they also play their instruments, so we're treated to some joyous sounds from these various guitars - which I think is the real message of the film.

The filmmakers take their time is letting Flip's story come out and this does tend to make the beginning of the film drag a bit. But once we get into a bit more of his family history and meet the parents back in Holland, things get a little bit clearer. There's a strong sense that much of his work has sprung from his relationship with his folks - his father always regretted that Flip never made more use of his skill at languages, but Flip says that he just chose a different form of communication. Since he grew up surrounded by miscommunication, he revels in being able to talk with others (even people he barely knows) through playing music. "Musical instruments are a kind of Esperanto" he says at one point. He must be fluent because he has an instinctive feel for how to pull sounds from the different shapes he creates. He fine tunes them for his customers specifically gearing them to their quirks and preferences.

The musical performances are low key for the most part, but very natural. One of the best moments is his visit to Carly Simon as they casually talk about music and her writing methods. At one point, Simon runs to the basement to search for a particular guitar and you can hear her singing to herself as she rummages around for it. We also get to see the technically proficient guitarist David Tronzo put corks in between his strings and tap them with drumsticks to duplicate the sounds of gamelan gongs.

The film is in no hurry, but that's OK. The guitars certainly aren't in any rush... 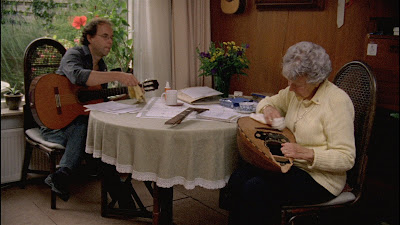