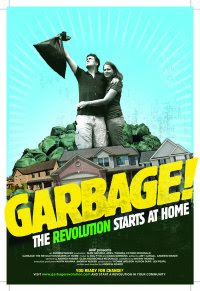 I like to think I try to do what I can when it comes to the environment: I recycle as much as possible, take advantage of Toronto's green bin program for food waste disposal and (last I checked anyway) don't have massive PCB tanks in my back yard. And it's been years since I started any tire fires...But Andrew Nisker's shoestring budget "Garbage! The Revolution Starts At Home" shows us we can all do more - and without much difficulty. Fortunately, he manages to do this without a great deal of preaching down to the audience.

Nisker borrows the post exclamation mark title of his film from the late Bob Hunter (co-founder of Greenpeace). It fits the film well as it touches on many wider issues, but continuously comes back to how what we do as individuals touches the larger whole. The jumping off point for much of the discussion of these downstream affects comes from the premise of the film: what happens when a single family keeps (inside their garage) every bit of garbage they produce over a span of three months? If you're the MacDonald family (3 kids under 8, 2 SUVs, large urban house, etc.) it gets a little messy. And smelly. And there's maggots.

But that's not really where the film focuses the majority of its screen time. Through the MacDonalds, we see how our every day activities contribute to environmental issues: our electricity consumption ties back to the blasting of the Appalachian mountains; driving your car contributes towards road runoff (a particularly nasty impact to local rivers); packaging from grocery food creates an awful lot of landfill; etc. During each of these segments, there is typically an expert of some variety who discusses, say, the direct affects to our water supply of most household cleaners. Nisker has managed to find experts who speak calmly and logically about their fields and who keep away from politics and fear mongering. Any fear the viewer may feel is derived solely from their own logical conclusions to facts layed out.

Not sounding like a barrels of laughs at this point? Here's the trailer:

Again Nisker makes a wise choice - the MacDonalds are lively, interesting and honest about their habits. They are fun and help keep the pace of the film moving from one topic to another. The little bits of animation (vary basic animation) also provide a bit of respite from the handheld home video footage. Throughout the heavy messages of the movie, there's a good deal of humour to be found and the crowd at our screening (including a bunch of young kids) seemed to enjoy it a great deal.

The first 5 minutes or so of the film gave me pause though...Sappy music, a little boy playing on a slide and Nisker's narration about his fears for the world his young son will inherit. It's not that I don't share some of those same feelings, but it didn't bode well for a fact-based presentation of his concerns. But apart from a few debatable conclusions arrived at by some of the people interviewed, the movie doesn't stoop to much further nonsense. As a matter of fact, by the end of it you'll likely think of "convenience" as quite the dirty word. Of course, I'd be lying if I said the movie has completely changed the way I live my life - but I'd like to think it's started to. 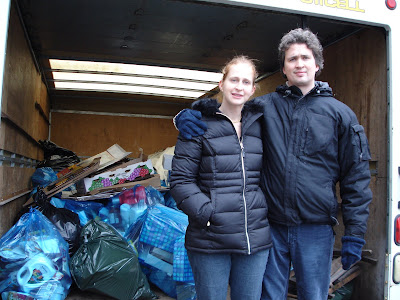 Web site of film (buy the film now on DVD)

12 Things You Can Do Right Now