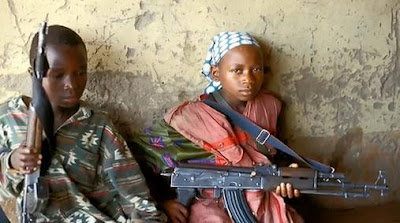 80% of the Lord's Resistance Army - a Ugandan rebel group - is made up of children. 30000 children (over the last 20 years) have been abducted from their homes and villages and forced into roles as front line soldiers fighting a battle they know and care nothing about. A full 30% of these children are girls - sometimes as young as 7 or 8 when they are stolen away - and they are additionally forced into marriage with the very men who kidnapped them. While sharing their "husbands" with other girls (one man had 29 wives), they are ordered to attack villages, kill the residents and burn the structures to the ground. If need be, they will do all this while carrying their youngest child on their backs.

Remarkably, some of these girls survive and make it back to their villages and families, but their hell is usually not over at this point. Typically, they are shunned upon their return. They were rebel soldiers, so how can they possibly be trusted now? The children of the "returnees" are often thought to have evil spirits within them and they too are isolated from what was once a caring and loving community. Some even consider returning to the LRA. It's truly unfathomable.

The National Film Board of Canada's "Grace, Milly, Lucy...Child Soldiers" gives us an opportunity to meet three women who have gone to hell and back, lived to tell about it and are fiercely determined to not only help those who have been through the same experience, but to also stop it from occurring at all. They belong to an organization called Empowering Hands that attempts to reintegrate former child soldiers back into their families and a social milieu. Grace spent 7 months as a soldier before escaping and now eloquently speaks for those who can't. She does it in a very soft-spoken way, but still manages to exude strength as she describes the sad realities of some:

"It’s very easy to create a killing machine. Just imagine. You’re seven years old and taken away from your family…your parents are killed in front of you or you’re forced to kill somebody. Through all that you’re beaten…then you’re given a gun and you’re told, 'This gun is your life.'" 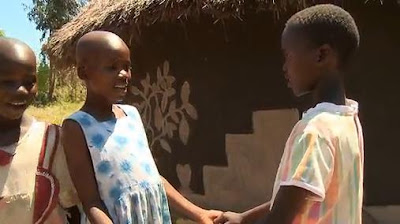 Milly and Lucy were both taken away at the age of nine and then held in captivity for close to a decade. They were both married to the same man, but Lucy had been with the rebels a bit longer than Milly and had discovered the power structure - if she abused others, she would "move up the ranks" and suffer less. So it was that she often beat the lower echelon wife Milly - something that Milly reminds her about as they now sit next to each other as friends and co-workers in Empowering Hands. They try to convince these recently returned women that there is indeed hope ahead for them. One woman dispassionately tells them of her child that was killed during one of the many attacks in which she participated - shot while sitting on her own back. The life has been extinguished from her eyes as she stares blankly ahead while breast feeding one of her remaining children. The task of re-lighting that fire appears to be a long and arduous one for Milly and Lucy.

These terrible and frightening stories are told while occasionally intercutting some of the stunning landscape of Uganda. This is gorgeous countryside and it contrasts and even counters these sad stories - there must be hope in a place as beautiful as this. Another ray of light are the husbands of Milly and Lucy. After all the tales of inhumanity and degradation, these two men offer quiet and simple testimonies of love for their wives and their children. Now that I can understand.