This will be the first in a set of posts where I'll try to give some capsule reviews and previews for several of the films that will be showing at Hot Docs starting this Thursday. There's no way I'll be able to provide full reviews of all the screeners and theatrical films I'll be seeing, but given the high quality of the films I've caught so far, I felt I needed to talk about as many as I could beforehand. 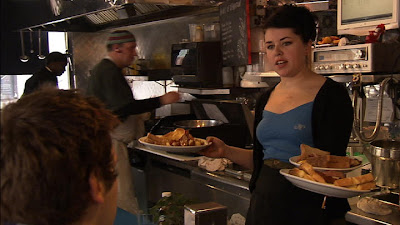 Dish: Women, Waitressing & The Art Of Service (2010 - Maya Gallus) - Via interviews with several women working as waitresses in Toronto, Montreal, Paris and Tokyo, "Dish" provides a wide variety of views regarding the role a waitress plays in providing service as well as how, for some, it can also be a vocation. It's a physically demanding and mentally draining profession, but whether these women are working at truck stops, topless restaurants, Maid Cafes (you have to see these places to believe 'em) or top end French establishments, they all approach their work with a strong sense of humour and dedication. Where the film gets even more interesting is how it contrasts some of the different views of service in North America, Europe and Japan - it's generalizing of course, due to the small sample size, but still pretty revealing. Along with the interesting and likeable people Gallus has found as her subjects, it all makes for very entertaining viewing. 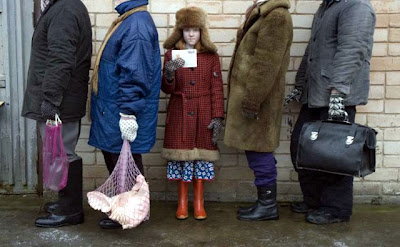 Disco And Atomic War (2010 - Jaak Kilmi) - J.R. Ewing was a busy guy. Along with his oil business, womanizing and constant scheming, he apparently had a big hand in toppling the former Soviet Union. At least that's the angle that Jaak Kilmi takes in his free-ranging and slightly scattershot look at growing up in Estonia - a region esconced within the USSR, but within reach of the television signals coming from Finland. These were signals that contained more and more American style content as time went on. Through old home movies, recreations, current-day interviews, stock footage and lots of episodes of "Dallas", we see how the eager denizens in Estonia soaked up these shows, spread the word (and videos) to other parts of the country and went to great lengths to acquire the TV signals (pharmacies would sellout of thermometers when plans for mercury antennas were circulated). It gets a bit jumbled at times, but is still a lot of fun and paints a picture of rebellion against overbearing control. 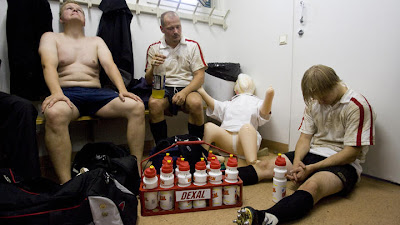 Freetime Machos (2010 - Mika Ronkainen) - Though Finland may have had a role in breaking apart the mighty Soviet Union, they have some weak spots too. Like, say, on the rugby field. Ronkainen's film purports to be about the third worst team in the world (as they are fourth in their six team league), but it's much more about what roles men take on in their lives as seen through the eyes of two friends on the team. One is single with a girlfriend away for months at a stretch while the other has 5 kids and another on the way. Their ups, downs, disagreements and filthy jokes are documented while we see them limp through their 8 game season with a British coach just trying to keep it all together.

My fiance is Finnish and showed me the trailer for 'Freetime Machos' a couple of months ago. It looks pretty good, I'm keen to hear what people think about it.

It's a fun if perhaps frivolous film. It certainly shows some interesting sides to different male behaviours using an original launching point - the Finnish rugby team - but doesn't quite hit all its marks.

I'd be curious to hear what your fiancee thinks of Disco And Atomic War. Most of it happened before she was likely even born, but a Finnish perspective would be interesting.

Cool, I'll keep an eye out for it.