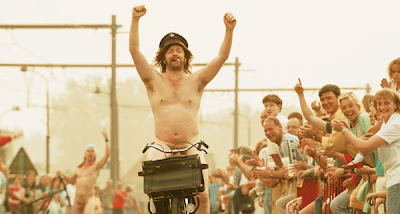 I'm republishing this review of "The Misfortunates" (from when I saw it at TIFF 2009) as it opens in Toronto THIS weekend (tonight as a matter of fact) and likely a few other cities in the coming weeks. It's yet another terrific film that really deserves some enthusiastic support. Decent attendance in its first week could help it extend its stay for a second week, so if you live in Toronto please try to get to the theatres this weekend...

It's not often a movie can take you from sweet and charming to sad and depressing then to laugh out loud hilarious and then shift to something quite disturbing. It's even rarer when the movie can do that all that within the span of 3-4 minutes...Repeatedly. Welcome to The Misfortunates, the story of a family of 4 grown boys (well, men actually) being raised by their mother as seen through the eyes of Gunther - the teenage son of the eldest. It's a bit crowded living all under one roof, but the boys are pretty useless on their own. Of course, they aren't really a whole lot better together either.

We initially meet Gunther as an adult. He's a struggling author who has yet to find himself published. Actually, he's pretty much struggling at everything. His menial jobs, his relationship and his happiness are all pretty much going nowhere. Most of the film consists of flashback scenes from his days as the teenager in the house with his Dad and uncles, but the story occasionally jumps back to check in with Gunther's current progress. This makes it less of a plot driven movie and more episodic, but considering the vast amounts of drinking the boys do, their lives really are quite episodic anyway. There's the naked cycling race, the dressing like a woman days-long binge, the world record attempt at beer drinking, the Tour De France drinking game and of course the big live Roy Orbison concert on TV. While this day to day chaos goes on, young Gunther is trying to become a man and make it through school. 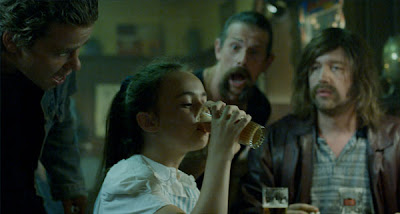 It's not easy for him...He loves his family, but they do make it hard for him to study. His constant tardiness and behaviour issues end up giving him many extra essays to write and though he embraces these opportunities to be creative, he still wonders if maybe he should board at the school. It's also hard trying to grow up when your youngest uncle steals the girl you had your eye on and you get some fairly mixed up advice regarding women, drinking and life in general. The men are buffoons and, let's face it, losers. They do little for society, are selfish and lazy, and are rarely sober. Yet you can't help feel a little compassion for each of them, if not quite sympathy for their inability to get their asses in gear. Even their mother has a difficult time keeping her patience - their treatment and ideas regarding women aren't exactly modern and Gunther is soaking it all in. Look no further than the bawdy folk songs they love to sing with enlightening lyrics like "One is not enough and three is too many" (from a song dedicated to women's breasts). And yet, they can still seem warm and caring even while they teach these songs to their young niece.

Set in a small town in Belgium, director Felix van Groeningen has created a fascinating portrait of people stuck in neutral who have let life beat them down until they can only look forward to the next period of drinking. It's partially their own fault (Gunther's Dad tells him he tries his best to fend for him, but he drinks away half his paycheque almost immediately after getting it), but the village itself also seems to strip away any beauty or hope. And yet, it' a strangely invigorating and highly entertaining movie - one that I hope more people have the good fortune to see. 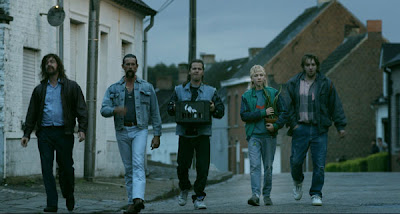