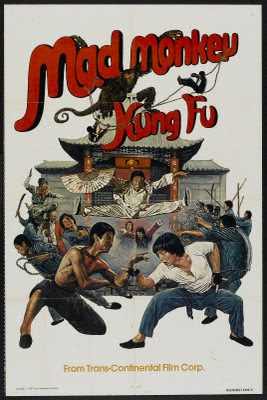 Until last night, it had been 2 weeks since I'd seen a movie. A full fourteen days and not a flicker of a film. Not in a theatre, not on DVD and not in any streaming way, shape or form. No stunning cinematography, no twisting plots and not even a probing analysis of the human condition. I pulled through though...

It's not like I was suffering - we took a little family vacation out to California and drove up the coast, so I had a few other things to look at (to any and all blogger friends I have in the region, my profound apologies for not getting in touch - we just didn't have much time in any of the bigger cities). Of course, like any other vacation, I had my laptop along and had brought some DVDs - but somehow I just never got around to watching anything. It's probably my longest "drought" since my son became a sentient being in his first year and began sleeping through nights. Since he just turned 10, it's been awhile since I had that big a break and so I've had a rather solid streak of regular movie watching. The break ended up not bothering me that much really, but once we left the Golden State, I was very much looking forward to getting back home and returning to my regular hobby time. The plan was to jump back in right away with the opening night of Toronto After Dark (which I may have mentioned once or twice...).

The little Friday the 13th demons wouldn't hear of it though. Just as I checked in to my flight back home early Friday morning, they cancelled it. No reason given, just a sudden "I'm sorry sir, I have some bad news...". Now that I'm in a better mood, I'll be charitable and assume that the plane had some major malfunction that would have killed us all and so they decided to pull the plug on it instead of getting bad PR. Earlier on Friday, however, I was severely bummed - OK, it's no big deal, but the festival is one of my fave times of year. It has entertaining genre films and I get to hang out with some truly great people I've met over the years (with each year adding new folks to the list).

So while I wiled away the time waiting for the next flight (a solid 4 hours later) and moping about missing the festivities, I made the decision to catch a later movie with a few of the After Dark crowd at the recently opened Toronto Underground Cinema). The film in question was kicking off the Son Of Kung Fu Fridays series that the venue was looking to install as a regular event. It was an old Shaw Brothers production entitled "Mad Monkey Kung Fu".

The title alone made me feel better (though not quite as much as this did). So a quick stop by the house to drop the luggage, re-engage the A/C and verify that the fish weren't ex-fish and off I went to view one of the Kung Fu classics. I met up with a few co-horts from RowThree and bumped into a friend from J-Film Pow-Wow, so immediately I was shaking off those little Friday the 13th varmints and settled in for some solid martial arts fare. Let's just say I received my money's worth.

Curator of the series Colin Geddes (who also runs the Midnight Madness portion of TIFF) treated the crowd to four (count 'em, 4) trailers of other Shaw Brothers films before the main picture started and he could have turned up the lights afterwards and cleared the house out with nary a complaint - worth three times the price of admission for these gems. Of course, each was a good 4-5 minutes, so there was plenty of wicked kicks, punches, wooden poles, swords, fast zooms, contorted faces and laser beams. Yeah, that last one surprised me too, but it was a beautiful thing to see.

Imagine this trailer about three times as long:


With the Friday the 13th trolls firmly beaten down now, the feature began. Like many martial arts films of the time (at least what I've seen - I'm woefully under-educated in the genre), there is a fairly large chunk of setup time, some overly broad humour and a story that isn't exactly fresh. However, and you had to see this coming, when they really start the fights (one-on-one, one-on-two, one-on-many, two-on-many, etc.), it's pure ear-to-ear grinning entertainment. The sound effects are amped way high, but even that can't take away from the obvious incredible athleticism of many of the moves that showed up on screen in the form of flips, training sequences, different postures and the interplay between the fighters. What was really impressive were the times when you would get a wide slo-mo shot of an acrobatic somersault of some variety - the control these guys had of their bodies was remarkable and truly a thing of beauty to witness. Many of the sequences during the fights were done in long takes as well. There were plenty of edits to mask certain hits, but plenty more instances of entire choreographed battles going on for minutes at a time. There was also lots of laughter and not only the "I can't believe he just did that" variety, but also because of several humourous situations and dubbing that provided additional layers of absurdity and silliness in the context of the story. One always wonders if there is some poor translation at work or if the script was meant to be rather simplistic and halting at times.

Nevertheless, it was heaps and heaps of fun. Thank you Shaw Brothers. You've reinvigorated me.
Posted by Bob Turnbull at 23:04

I was almost relieved by your comment on being "woefully under-educated" on this genre. I feel the same way. Really, there's no better solution than to roll up my sleeves and start screening more, but whether one is discussing classic martial arts movies or contemporary ones, it's almost daunting with the amount of releases available. I only feel this way about martial arts films. For example, the Criterion Collection keeps growing every month, but that somehow seems easier to stay abreast of...

Just the title of the film alone had peaked my interest. Now, after reading your review, I really want to see this film. I wonder if a copy is still in print on DVD?

Thanks Jamie...The backlog of martial arts films is astounding. How many of them are as goos or as fun as Mad Monkey Kung Fu, I'm not sure...The trailers we saw were terrific fun, but I can see how at least two of them might turn out to be pretty bad films. The others were totally awesome...B-)

CS, Colin actually gave away a copy of the DVD (with subtitles - we saw the dubbed version), so it was out there at some point. I don't know if it is currently available. I plan on finding out soon though...B-) I expect some trolling through Spadina or the Pacific Mall might turn up a copy, but you certainly take your chances doing that...

By the way, if you are at After Dark this week (and from the looks of your blog you are), look for us by the front left side of the Bloor (your left as you walk in). I'm missing Cargo today, but will be at the following two and the Pub afterwards. Hope to see ya...

I was at all three yesterday, but end up sitting in the middle to back area as my cousin was with me. I am hoping to hit The Last Exorcism tonight so I will look for the gang near the front.

I'm glad you enjoyed it! I own the print & came from Montreal to watch it being screened! Thanks for the kind words! Props to Colin & Kung fu fridays!

Well, thanks right back at you naja for bringing the print! I think I owe you a beer or something for allowing me to see the film (and yes, props to Colin of course).

Say Hi to my old city for me, will you? I miss Montreal a great deal sometimes...

Mad Monkey Kung Fu was one of the first movies I ever looked for on the gray market back in the 1990s, mainly on the strength of Joe Bob Briggs's assertion that it contained "every kind of kung-fu known to man."

Such a fun movie.

"every kind of kung-fu known to man."

Briggs may very well be right with that assertion - I don't know my styles very well, but it seemed to hit just about every possible move.

I'm going to have to try to make it out regularly to the Son Of Kung Fu Friday events.