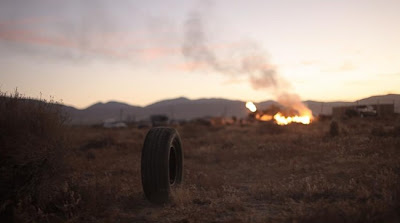 There was a certain bounce in everyone's step walking into the first film of the one-two closing night punch of Toronto After Dark and it could be directly attributed to Quentin Dupieux's widely hailed Rubber. More than Eli Roth's appearance with "The Last Exorcism", more than genre-fest hot picture of the year "The Human Centipede" and more than the controversy of "I Spit On Your Grave", this little 75 minute movie about a tire that gains consciousness and begins a killing spree caused probably the most buzz of the entire festival. Even those who had recently seen it at Montreal's Fantasia film festival were queueing up to view it yet again.

The word was that it was a must see. People who made these recommendations would just shake their heads, smile and say "just go see it". When it's people whose opinions I respect, I don't need too much more convincing than that. Let's face it, though, I was already sold on the high concept: "sentient killer tire". In addition, there was always a bit of a gleeful cackle from those who had experienced it and a slight twinkle in their eyes that seemed to say "Yeah, you may think you know why this will be fun, but it's all the things you don't even know that you don't know that will get you." It was very Rumsfeld-ian. Now that I know what I didn't know, I'm not talking. As for the killer tire sections themselves, they are indeed fun and quite well realized as per the short teaser below:

After the tire "awakens", it begins to explore its world and realizes it can crush small objects and insects. As it discovers bigger obstacles and species, though, it needs to use its psychic ability to make them explode. Why? Well, there's some indication that there's a purpose behind its rampage, but we mostly just know it's pretty peeved - it seems to seethe with rage and quiver with anger as it uses its forces to blow things up. There's more to the film than the tire's next victim, though, and it can be found mostly in how the story is constructed and how it's told to its audience. It allows you to question not just what you see and certain motivations, but also how film actually engages with its audience. It's not a simple matter of being meta or self-reflexive, but it really does force you to consider how movies are viewed. Dupieux (also known as Mr. Oizo - an artist and music producer) has found a very clever way of doing this.

The After Dark crowd ate it up. It exceeded my own expectations too, but it's not like I could have expected what I got. That's not a statement hyping completely insane, random events occurring for no reason, but simply to say that I had to completely readjust how I was watching the film. So don't let anyone spoil the nature of "Rubber". If it plays near you at a festival or in a one week engagement (there was some talk that it would get a limited release) or when it comes out on DVD, just make an effort to support something different, funny, absurd and very smart. Then you'll know what you didn't know and be happier for it. 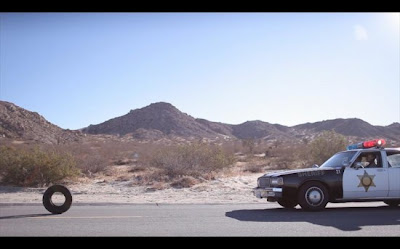 I wonder if Canadian Tire is seeking a promotional deal?