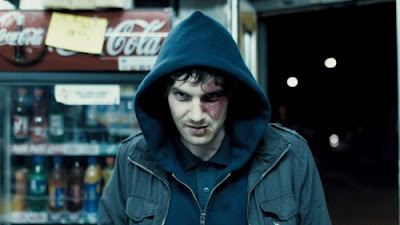 Among the calvacade of British films at this year's Toronto After Dark film festival was Philip Ridley's first feature in 15 years, the brooding Heartless. It was the one film in the lineup for which I had absolutely no preconceptions gping in - the trailer was sketchy and I knew nothing of his previous work (in film or otherwise - he's quite the renaissance man even writing children's literature). So I was a blank sheet walking in. I should've brought a couple of empty notebooks to capture all the ideas and imagery this terrific film brought forth.

Jamie is 25 years old, lives with his mother and just can't seem to get his life going. Of course, he isn't realy trying. His hunched walk complete with a head-covering hoodie shows his unwillingness to engage with the rest of humanity and life in general. Humanity hasn't exactly been banging on his door, though, as most people tend to recoil when they encounter Jamie and the large heart-shaped birthmark on his face. His confidence in himself and his opinion of the world in general is rock bottom. He wishes he could return to, if only for a brief moment, that wonderful day he spent with his father years ago looking up at the stars and talking about the beautiful things that life had to offer. That would be heavenly. Since his father passed away though, Jamie can't really find anything to ignite a passion and simply lets life happen to him. His photography is the one saving grace and through it he encounters a lovely young woman that stirs him. Of course, he doesn't act on his feelings. His photography leads him to another discovery of sorts as one night while wandering through a demolished building site with his camera, he stumbles across the gang of similar hoodie wearing thugs that have been causing local havoc. There seems to be something a bit off, though, as the sounds they make are positively demonic in nature. 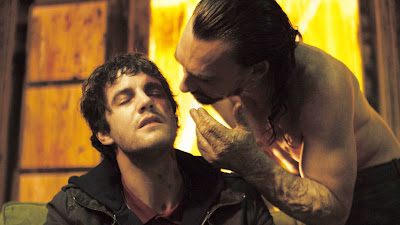 Jamie certainly feels they are demons, but they aren't the only ones in the film. Inner demons and a person's capacity to let go of the things that torment them are at the heart of the story. Jamie's own inability to get past his father's death as well as his own surface appearance has completely shut down his relationship to the external world. Unfortunately, Jamie sees more opportunity at re-entering society by concerning himself with his outward appearance rather than his inner health - so when the chance to meet a wish-giver by the name of Papa B affords itself, Jamie takes it and agrees to pay the "price" for the removal of his birthmark at some later date. For a time, after the heart-shaped patch on his face has disappeared, Jamie is ecstatic: the girl is his, he looks beautiful and he has a strong sense of self. Before long, though, Papa B's "weapons man" (played with perfect "zing!" by Eddie Marsan) comes to tell him what he needs to do (and how he needs to do it) and Jamie is no longer sure that ridding himself of his heart was the right thing to do.

If that sounds like there's some heavy imagery and moral messages going on, well, there might be a bit. However, it's all done so wonderfully, with subtlety and without being maudlin that it pulls you along. There are signs of demons, angels and hearts a-plenty on walls, shirts, posters, etc. Within this great framework, Jim Sturgess skulks around so effortlessly inside the role of Jamie that when he transforms, it really feels like a major change has taken place. There's not a false note played by any member of the cast as far as I could tell and it all comes together in a movie-going experience that I fully expect to reward many repeat viewings. The scares and chills that the "demons" provide can be unsettling, but what really grabs you is Jamie's personal journey. I can only hope this receives a wider release and audience.
Posted by Bob Turnbull at 16:22

Interesting. Ridley's "The Reflecting Skin", if it can be found, was a truly great, brooding film. I'll look forward to this one.

Oh, I'll be looking for it all right...I found The Passion Of Darkly Noon at zip.ca and immediately added it to the queue, but they didn't have The Reflecting Skin. I've heard very good things about both his other films.

*slow clap of awesome for this review*

This is the one film I was looking forward to during the fest, and I was not disappointed. Loved your review. Will have to think of something before I write my own.

some good films at the festival, thank you for the writing good reviews. there's no email on your page can you drop me an email, thanks