Toronto After Dark 2010 - "The Human Centipede" 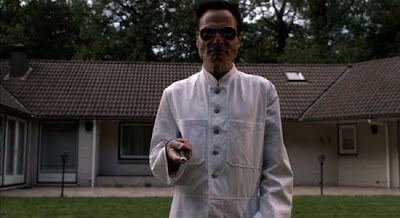 I'll be honest...I wasn't really looking forward to The Human Centipede. At least, I certainly wasn't looking forward to it as much as the young woman sitting in front of me who, before the show, was alternately bouncing in her seat giggling and making out with her boyfriend. That's the kind of festival Toronto After Dark is though - it's never tried to appeal to all tastes. So I certainly couldn't blame the festival for booking "The Human Centipede" as their final offering after 8 days, especially since it had yet to play Toronto after an almost year long run through various festivals causing much love and hate. In the end, the most surprising thing about the film for me is how ambivalent I felt about it afterwards.

There's certainly several disgusting sections of the film, but nowhere near what I had envisioned (many of those things are left to your own imagination). I had also heard that much of it was played as camp, but there was never any sustained comedic tone to really build up any ongoing enjoyment (Dieter Laser's performance as Dr. Heiter does provide some pretty funny stand alone moments though). It is sickening at times and certainly has disturbing moments (in particular the final situation), but I'm frankly not sure why its notoriety has continued to climb. 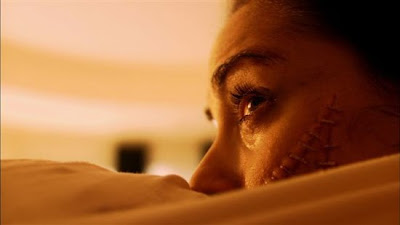 For those that know little about the film, its title gives you a pretty good idea. Mad Dr. Heiter has a dream...He wants to create a centipede out of humans with each section being a different person and the entire entity having a single food tract (so when food is expelled from one section it enters the mouth of the one behind it). He started with dogs and has now moved on to find the right specimens for his medical miracle. He finds two of them by luck - Lindsay and Jenny are two American young ladies travelling through Europe when they get lost on their way to a club. They stumble across Heiter's secluded house to ask for help and, after he determines that no one knows where they are, are drugged by him. Of note in the pre-screening comments was that the two actresses were essentially the final two people they had left on their casting sheet. None of the others wanted the roles. Once you see what they are put through (in particular because neither of them have any dialogue after a certain point in the movie), it's easy to understand why this was the case. Since it obviously wasn't easy to find 3 actors willing to play this particular centipede (a Japanese man who speaks neither English nor German is brought in later to complete the experiment), one wonders how they will handle the sequel (to be subtitled "The Full Sequence" as opposed to this film's "The First Sequence") which apparently will contain 12 sections.

Another surprise was the look of the film which was much brighter than I was led to believe from the posters and other comments. Not that it was all cheery looking, but it was sharper and more colourful than expected. Though the story plods considerably, director Tom Six does manage to keep some visual interest by having his camera move during many of the setup shots. That helps to build some early tension, but at some point things just dissolve into wincing. Genre cinema doesn't have to always provoke you or have a greater truth at its core or speak to societal issues, but it should engage you on some level and pull you into its world. "The Human Centipede" flirts with this, but never to the point that you really care. Certainly not anything for which I would expect people to get overly excited.
Posted by Bob Turnbull at 11:26