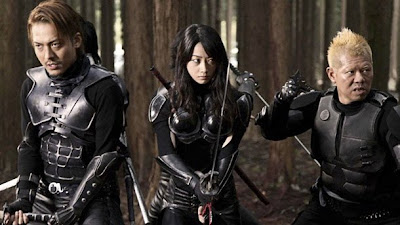 Among the Toronto After Dark Film Festival recently announced are numerous smaller awards dedicated to special fan voted categories. Alien vs Ninja won (deservedly so) the "Best Fight" award for its rather epic 10-minute fight sequence near the end of the film. Using old school monster costumes and slime effects, a good sense of humour and some spiffy ninja moves, the whole fight is a bucket full of fun and goo and drew a great crowd response. The film's opening sword fight in the woods is also well choreographed and wastes no time jumping right into the thick of things. So why do these terrific bookends have to keep afloat a rather dull, cheesy and rather pointless centre?

Granted, I was pretty tired the night of the screening, but shouldn't a movie called "Alien vs Ninja" be able to entertain me enough to keep my eyes open? Especially when the title was exactly what I expected and exactly what I wanted from the film? Instead, there are long stretches of, well, nothing. Characters say and do things with little rhyme or reason, provide exposition that is relatively irrelevant and try to be funny. To be fair, there are little bits of humour sprinkled throughout that showed the filmmakers weren't taking themselves too seriously, but we also had to deal with the "comic relief" ninja going about his business by being a complete failure as a ninja. I suppose this might come down to personal taste in finding what's funny and what isn't, but I can almost objectively say that this guy was NOT funny. He pretty much diluted the whole idea of how powerful ninjas are supposed to be. 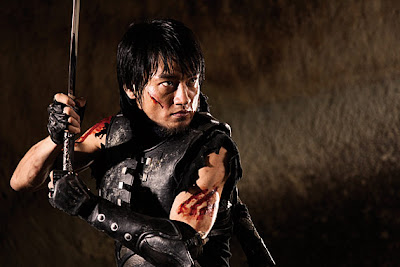 But what about plot? Well, it's all right there in the title of the film. As a matter of fact, you can't actually expand on the plot beyond the title of the film - there's really not much more to say about it. There are ninjas. Most of them are pretty awesome fighters. An alien comes to earth. They fight it. I hope that clarifies everything...That's not a knock on the movie by the way - I was perfectly fine with the idea that a movie would simply be a set of battle scenes between sword-wielding stealth fighters and a monster from space. Given the right amount of creativity and sense of fun, why wouldn't that be a blast?

Why indeed...Anything between those great beginning and ending fights simply laid there on the screen. No punch, no pow, no zing. Moments of chuckles perhaps, but anything remotely creative was dispensed with quick in order to get back to the bumbling ninja. Or maybe I just kept waking up when he was on screen and it felt that way...I genuinely wanted to embrace this movie and its campy, old school approach to a monster film. Many others at the fest seemed to get much more out of it, but I just couldn't.
Posted by Bob Turnbull at 23:14