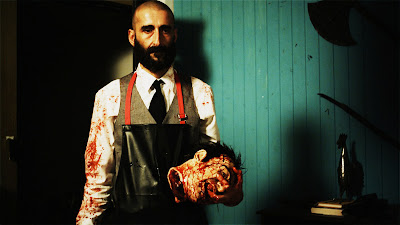 Expectations are a funny thing when it comes to movies...Unreasonably high ones (based on hype, a director's history or a much-loved book as the source) can totally ruin your experience. It could still be a quality film, but if it doesn't meet the lofty heights you had in mind it becomes a failure. The flip side to this is that really low expectations can turn a movie-going experience - even for a complete mess of a film - into an enjoyable and surprisingly entertaining one.

And so it was for the Greek zombie film Evil In The Time Of Heroes. A few negative reports from its screening at Fantasia combined with a not-so-great trailer, disappointment with After Dark's previous zombie film Doghouse and the prospect of random Billy Zane sightings throughout the film left me rather underwhelmed as the screeningm began. The story is mostly set in present day Athens where a typical zombie outbreak has occurred (the "fast zombie" variety) and the remaining unaffected citizens try to survive. Through intercutting with a similar outbreak from 2000 years previous, the movie implies that this evil will continue to reappear in cyclical fashion - each time requiring a "chosen one" to help defeat it. The film bounces between not only these timelines, but also the many, many characters in the present day situation and shifts tones, style and pace constantly. Tack on the seemingly invincible Billy Zane sage who appears in both timelines, the sudden super powers that one of the characters exerts and inconsistencies across the board and the entire thing is a large mess. So how come I rather enjoyed it all? 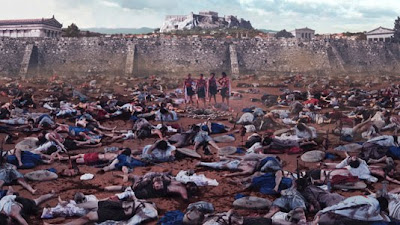 The humour in the film is all over the place with many jokes falling flat and beats getting missed, but I had no expectation of any of it working. There are a couple of gags that work like gangbusters though (including an early scene where four characters escape from inside a stadium where they are surrounded by zombies) and a few subtle and well-timed lines from some of the survivors. It proves frustrating that they couldn't keep that up for the whole film or continue with more of the absurd situations, but since everything moves at a fast enough pace, if I hit disappointment during one scene, something else was just looming over the horizon. The zombie attacks aren't staged overly well (and the usage of that quick, choppy action filming is getting increasingly aggravating to me), but there are several zombie "kills" that are very well realized. Then we get Billy Zane...His appearances do indeed seem randomly dropped throughout the film and he serves no real purpose other than to bring a recognized name to the credits, but you couldn't help but look forward to his next on screen moment and the audience got into the Zane-zone after awhile. It all culminates in an early highlight of the festival for me, a moment of - I have to say it - sheer in-Zane-ity as about 15 disembodied Billy heads rotate across the screen. I didn't see it coming (I mean, how could you?), laughed long and hard and settled back to just let the rest of the movie spool out.

The same filmmakers have a prequel of sorts entitled Evil with many of the same characters. From a story perspective, there's no need to have seen it in order to be able to keep up with this film. You don't really require prior knowledge of characters or events when your current story is relatively non-existent. There's plenty more to pick on if you want - the acting is uneven, character motivations sometimes don't make any sense and the ending takes way too long to resolve itself (at least, I think it resolved itself) - but I simply can't say that it didn't hold my attention and, for the most part, keep me entertained. Let's hear it for low expectations!
Posted by Bob Turnbull at 16:22