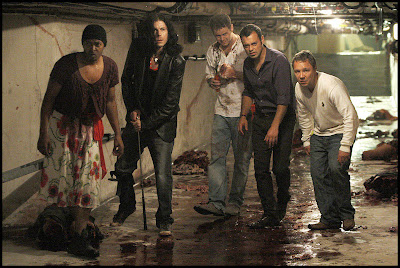 That's Jake West's recent entry into the zombie genre in a nutshell. As it kicked off the traditional "zombie" day at Toronto After Dark, I was hoping it might live up to its interesting premise: a group of boorish "lads" are stranded in the town of Moodley which has, unbeknownst to them, been turned into a government experiment that has reduced all the women in the village to be zombies. Given that it was a comedy and had numerous angles with which to work its battle of the sexes theme, it was just such a shame to see it squander it all to come to the conclusion that 1) all women want is to emasculate men and 2) "guys" ought to be proud to be "guys" and should never apologize for being complete assholes. The big revelation for the main character of Vince (actually played quite well by Stephen Graham) is that his ex-wife had indeed sucked the life out of him and that he should go back to being a crude buffoon since she had stolen his manhood by objecting to philandering. Wonderful. 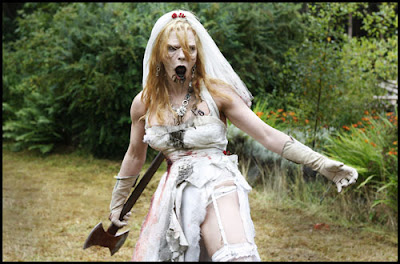 Vince's continued depression over the divorce is the initial reason for the trip to Moodley since his buddies think a weekend of debauchery is just the ticket to get him back in the game. They rent a bus (driven by a woman whom they dub "Candy") and plunge into the woods to get to the isolated little village. As they explore the apparently deserted town, Candy succumbs to the zombie virus (pedantic interlude: since the change of state of the women is caused by a virus, they aren't technically "the walking dead" form of zombies - I know this, and yet I'm going to use the term "zombie" anyway). Since she has control of the bus, they hole up in various shops and so forth in the town once they realize what has happened. These female zombies are reasonably interesting in and of themselves - one carries a stop sign, another two pairs of scissors, etc. - and they typically end up fighting with themselves when they go after the same man. It's that type of humour that could have gone a long way in the film if they had played it up further and bounced back and forth between the different cliches that represent men and women (there's a few at the expense of the men as well), but they come too few and far between to have any major impact. Aside from a few others gags (e.g. the Macgyver-ing of a flame thrower from kids' toys), the humour is mostly obvious and, well, not that funny.

The opening of the film was the warning bell - each character has a small scene of introduction to show you who they are which then freezes on them as their name appears on screen. The movie wants to jump out as some slick pop-pop-pop Guy Ritchie guys' movie, but there's not a single thing interesting about any of these guys. They aren't even boorish enough to make you really want to hate them. You just get annoyed. And to come back to the ending again, who among these guys actually gets killed? The least masculine, the new-agey one and the slightly dim-bulb chubby one.

Thanks "Doghouse"...Thanks for clearing up what a real "guy" is supposed to be.
Posted by Bob Turnbull at 10:21

Personally, after 'Snatch' and 'This Is England', Stephen Graham gets my vote ... but alas, the cliche 'bloke' he can get lumped with does not do him justice. Lets hope that his acting chops are alot better in Scorseses' TV series 'Boardwalk Empire'...

Hey, great meeting you at the Festival this year. Too bad I couldn't stay for more screenings, although I enjoyed our drinks at the Pauper last night.

You and I came away with quite different interpretations of the gender message in Doghouse. I'd love to hear what you think of my review on The Zed Word zombie blog.

Also, I look forward to the rest of your coverage of the films I can't see.

Graham is in Boardwalk? Wow, that could be great...He really does have a certain quality about him.

Great meeting you too ZedWord! I'm sure we'll bump into each other again. And again and again...B-)

I read your review and we definitely disagree on the film...You make an interesting point about the possible open ending of the story (I didn't see it that way, but I suppose it may leave the resolution undecided), but I guess I just wasn't feeling charitable considering how they got there. And I simply wasn't overly entertained by the time they did. There was a lot of stuff (including, as you mentioned, the large woman's actions) that just fell flat for me.