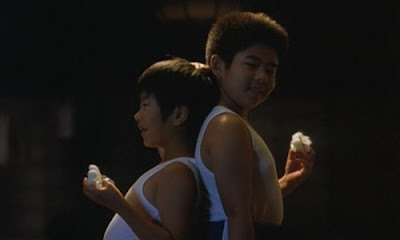 "Yesterday was all we could ask for."

In response to being asked about their greatest wish, a character gives the answer above – delivering not only a tremendously sweet moment (in a film packed with them), but also a tidy summary for the film’s themes (especially given its context): Don’t wait on miracles. There’s always hope, so make the most of your current situation, work hard for your dreams and enjoy the tiny details of life in the meantime.

Hirokazu Kore-eda has worked this realm before – this is a warm, human story of real characters facing real problems and dealing with them in both funny and sometimes heartbreaking ways. There’s less at stake here compared to some of his previous works, but the hopes and dreams of 7 kids still provide for very real moments of emotion and should be recognizable by just about anyone who remembers being on the brink of maturity – and being not quite sure what to do with it. And so it is with Koichi, a 12 year-old boy dealing with his parents recent separation and prone to proclaiming “I don’t get it!”. His guitar-playing father has moved to Fujuoka with his younger brother Ryu while he stays with Mom and his grandparents in Kagoshima under the constant threat of an erupting volcano. While Grandmother opines that if they had more money both boys could stay with them, his mother frets about the fact that Ryu chose to be with his Dad. In actuality, both boys agreed on the split so they could monitor their parents and look for opportunities to get them back together. Which is where the Bullet Train comes in…

The new train line will be linking their cities soon and there’s a rumor that if you see two bullet trains traveling in different directions pass each other, a miracle will happen and you can get anything you wish. This strikes Koichi as a chance they just can’t pass up. Along with two buddies, he figures out the most likely point the two trains will pass and schemes to skip school and travel there to make his wish. Koichi’s wish is simple enough: He wants all four family members to live together again – even if that means wishing for a full eruption of the volcano to force the issue. His friends have their own wishes (one of them hoping to marry the school’s beautiful young librarian) and once Ryu decides to meet them at the crossing point coming from the other direction and bringing his own friends, the plan is set into motion. The joy of the film, though, is the time we spend with all the characters as we get to know their expressions and mannerisms – and not just the kids (though they are delightful – especially the energetic and boisterous Ryu), but their parents, neighbors and school teachers as well. Through several montages, we see them run into problems, practice for their goals and live their imperfect lives. The kids aren’t the only ones who get a chance to talk about what they wish their lives were like, so once the adults chime in there forms a greater whole of regret, missed opportunity and the always present question of “So what do you do about it?”.

As with several of his other films, Koreeda coaxes out real moments of truth from his actors. When the kids talk about their biggest wishes, there are sharp cuts which jump to side thoughts about what else they must really want. Given the way the kids relate these thoughts, one can’t help but wonder if they are completely improvised or just their real personalities talking out loud. Whatever the case, it works wonderfully and pulls you completely into the hopes and desires of every single character in the film. These feel like real, fully fleshed out people to whom you’d love to be connected. Their lives are still works in progress and if everything isn’t completely wrapped up in a nice bow, it’s nice to see by the end that Koichi is starting to “get” things.
Posted by Bob Turnbull at 00:23

Great review of a beautiful film.

Thanks Corey! That's much appreciated...I had initially heard some slightly disparaging words about Kore-eda's latest before the fest, but after it started playing, I don't think I heard a single negative comment.