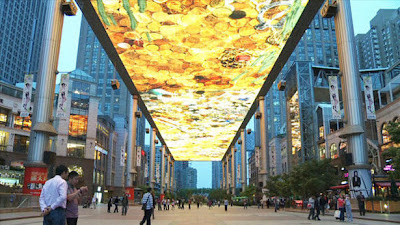 Gary Hustwit’s final film in his design trilogy is essentially a call for engagement in the democratic process and a treatise on the power of community action. You should walk out of his film talking, arguing and, most importantly, thinking. Thinking about your city, thinking about your living conditions and thinking about what you and your government should be doing.

The previous two films in his trilogy focused on tangible and real objects – things you could hold and examine closely for all their foibles and finer points. With Urbanized, he dives into the topic of urban design – a look at how our cities are put together and the problems that will face them and their denizens in the decades to come. Though it certainly discusses and shows real implemented solutions, it deals far more in the theoretical realm than his previous efforts. Therefore it becomes a much more politicized film by default – which becomes both its strength and one of its weaknesses. For the surfeit of ideas the film presents and for its ability to lead its viewers to consider their own situations, it will likely never be seen by those people that “need” to see it. And if they do, then it likely won’t be viewed with unbiased eyes.

Granted, the film isn’t exactly unbiased itself. It leans heavily towards a specific viewpoint – away from suburban sprawl and towards a non-car culture (a point of view that I mostly share) – and doesn’t provide as much counter-balance in ideas as you might expect. As I walked out of the screening a friend and I were extolling the virtues of what we had just seen and just as I praised its vast array of ideas, a third friend jumped in to say that he thought that was what the film was lacking. His point was that it had some great examples of one form of urban planning, but not as diverse a set as he wanted to see. He too agreed with the basic leaning of the film’s point of view, but thought that it needed to allow further arguments some time in the spotlight. In essence, he was killing our post-show buzz, but he had a point. A prime example is the consideration of the suburbs. One section of the film focuses on Phoenix Arizona – apparently the poster child for suburban sprawl as the city crawls its way out into the surrounding desert – and finishes with its main interview subject stating in very honest fashion: “Look, I like my big house and I like my pool. And so do a lot of other people.” Whether you felt that guy was being overly selfish or not, he has a point – a lot of people fall into that category, so where do they fit into the considerations of planning our living spaces?

Back to the actual film for a moment…It shares with its two predecessors the same striking style, shot compositions and percolating music (that underpins the many montages of cities from around the world). Hustwit and his cinematographer Luke Geissbuhler compose some truly gorgeous (and occasionally quite disturbing) shots of some of this planet’s biggest metropolitan areas. These help to set the stage for the major issues these cities face as well some of the recent solutions they’ve put in place. At its World Premiere at TIFF, the crowd was particularly enamoured with the mayor of Bogota Colombia and his thoughts about focusing on the bicycle as a main transportation device – particularly the head-slappingly obvious (in retrospect anyway) idea that bike lanes should be on the inside of parked cars and not on the outside. Of course, the crowd was already in Hustwit’s court since he finished his title sequence with a lovely (though fairly standard) view of the Toronto skyline. The film sets the tone of its message at “urgent” pretty quickly as it delivers a raft of stats that are quite frightening – one in particular stated that 33% of new urban dwellers will live in slums. Which goes to show that not all the issues have obvious solutions. A specific example of this and of the need to gather a wide sampling of data from the very people who will be using the urban landscape being designed happened in Santiago Chile. City planners asked a set of possible tenants for new public housing whether they would want a hot water heater or a bathtub. The builders thought it was glaringly obvious that people would pick a hot water heater and yet, 100% of those surveyed answered that they would prefer a bathtub. It turns out that these people are used to washing with basins and from small containers, so the thought of a bathtub is very attractive to them. Many expect that they couldn’t even afford the gas to heat the water, so the heater would probably never even get used…

It’s tidbits of information like that which become one of the joys of the film. It emphasizes what can be done when you look at a problem in a bit of a different way and involve the people who hope to gain from the solution – in other words, the citizens of the communities. The old style of planning that views a city from high up should be rejected as it’s a tactic that leads to entire waterfronts being cut off from their cities as well as individual communities from each other. The movie provides many fresh ideas and novel approaches to the many problems that are just starting to surface as our overall city populations rise. It’s absolutely something that I hope my own city’s mayor might watch and use as another tool to drive discussion. Unfortunately, by wearing its politics pretty openly it’s not a likely scenario, but the choir will love it.
Posted by Bob Turnbull at 07:47