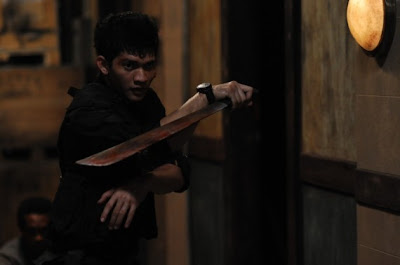 Drawn in by the people and city of Jakarta, director Gareth Evans made a decision several years ago to continue filmmaking in Indonesia after doing a short film there. This major career turning point was aided by his fascination with the style of martial arts (Pencak Silat) he found there which he felt would work well in feature length action films. Boy was he right – without a doubt The Raid (his second feature length action film which World Premiered at TIFF’s Midnight Madness last Thursday) contains some of the most brutal, teeth-gritting and sustained fight scenes I’ve ever seen.

The story is somewhat nominal. A SWAT team attack an apartment complex that houses a dangerous drug lord and his cronies. As they move up floor by floor, they wipe out gang members and slowly secure the building. Until they are discovered and the gang fights back. That’s pretty much all there is to it. The set up is handled within 5-10 minutes and the shooting, stabbing and foot-to-face combat begins. Of course, there’s a few of the cops with specific characteristics (scared rookie, hardened veteran, soon-to-be first time father, etc.), but it really doesn’t matter. Even though the drug kingpin manages to get off a few good lines and crazy-eyed stares, this is not the kind of movie that has fans scrambling for early versions of the script on the Internet. It’s all about the visceral thrill of watching people beat the living crap out of each other in very unique as well as old-fashioned ways.

And good god do they ever…Person after person gets dispatched in highly violent and bloody fashion – at first it’s machine guns, then other assorted firearms follow and it proceeds to swords, knives, clubs and your basic tried and true limbs. Oh, and fluorescent lightbulbs.

There are 4 or 5 incredibly long fight sequences – some between just 2 or 3 guys, but others between some of the Swat team and hallways full of baddies. The pace is furious so you never have that feeling that each individual evil dude is waiting his turn to fight our hero. Each attack move happens with such speed and forcefulness that you never doubt that everyone is trying their best to eliminate the other side. The good guys take their lumps too – these aren’t supermen, so you really do feel nervous for them in each and every fight. And do you ever feel those fights. The foley editing is extraordinary with each punch, baton whack and body thrown against a wall reverberating throughout your own body. The Midnight Madness crowd was completely pulled into each and every fight with choruses of “oh!” coming frequently after particularly nasty comeuppences – for example, the one guy that gets pulled up in the air by his legs and then gets his neck slammed down on the broken shards of a door jutting up from the floor. The lead in all this chaos is played by Iko Uwais – a phenomenal talent who comes across almost as likable as he does ferocious.

I really need to see this film. Everyone I spoke to is raving about the film. Caught the trailer the other day and was stunned (in a good way) by some of the action sequences.

Really really really love this film. Still can't believe how worked up I am over it. One of those films that demands late night screenings with the 'dudes.' I feel that once this gets a wider release it's going to be talked about for a long time.

CS, yes, yes you do need to see this...Preferably in a theatre packed with people who like good bone-crunching sound effects.

You may be right Nick - I definitely think it will appeal to most of the action fans out there. I hope the subtitles don't scare off too many people since it's really not an issue here (not that it ever should be, but that's a different topic) - bone-crunching is bone-crunching and you don't need to translate that.