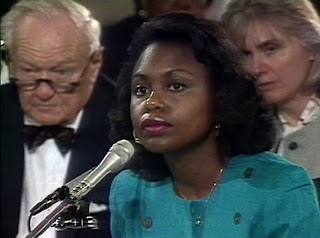 I'm a bit conflicted over my impressions of Freida Mock's newest documentary Anita, so let's see if I can work them out...

First of all, let me be clear about the subject of the film - Anita Hill is clearly an incredible person. Intelligent, funny, brave and interesting, 20 years ago she became a lightning rod around issues that few people enjoy discussing even today. And yet, there it was on the news back in 1991: an entire panel of old white men talking about sexual harassment, penis sizes and pubic hair during the Supreme Court confirmation hearings for Clarence Thomas. As women were finally breaking down some barriers by garnering greater positions within the U.S. government, Hill's grace under fire during her single 9 hour questioning session made her a role model for many women and brought more public attention and debate to the issues. Hill understood that harassment of any kind is primarily about control (perhaps being the youngest of 13 children helped her recognize this...) and she strongly felt that her prior experiences with Thomas' repeated sexual advances and inappropriate closed door insinuations was relevant to him being given a lifetime position on the Supreme Court bench. In other words, "Speak Truth To Power". The film documents a great deal of Hill's lengthy appearance at the hearings via old news footage and shows us the road she traveled afterwards up until her present day role as a speaker and professor of public and social policy. Though she never wanted to discuss her history specifically in the classroom, she's never shied away from it. "If I'm not public, it will be a sense of victory for them".

But the film let's both Anita and the audience down in the telling of all these events. There are fascinating sections of her story (the condescending questions of senators at the hearing, the 25000 letters of hate/support Hill has received, the effect she had on the rise of female politicians at the federal level, etc.), but it's told flatly, doesn't always provide as much context as it could have, and mostly sticks to archival footage and current talking head interviews. It's clear that Mock wanted to keep the focus on Hill, but as engaging as Hill is herself when speaking and discussing her family, career before/after the hearings and her hopes for the future, it sometimes feels similar to a 60 Minutes piece. That's not in and of itself bad, but it's disappointing. Particularly due to the excellent work Hill is currently doing with young women and the array of her peers that could have been pulled in for further positioning of her role in changing perceptions on harassment in the workplace. As I walked out, I mentioned to a friend that all the conversation I heard after the film was mostly about ideas Anita Hill had discussed in the extended Q&A (also attended by Mock) and not about the film.

But then again, people were talking. And isn't that what a good documentary should do? Get people to discuss the ideas and concepts that it covers and "start a conversation"? There are certainly numerous topics that could be launched from just about any point in the film - how her character became the issue when it was supposed to be about Thomas; how Hill's race was rarely raised, but Thomas' was; the fact that Democrats - though they weren't as aggressive towards Hill as the Arlen Specters and Alan Simpsons of the committee were - essentially fed her to the lions; how Oklahoma state politicians tried to get her fired from her law professor position and then attempted to get the entire law school at the University of Oklahoma closed; how she found very little support among black men who questioned why she would go after one of their own; etc. One of the strongest takeaways from the film is Hill's own statement about her approach to teaching law: it shouldn't be "just what law is, but what it can be". It speaks volumes about her.

But I can't help but return to Hill's own point about moving towards work environments that are free from any kind of harassment (and not simply dealing with it when it occurs). To do that, it means we need not only to teach the future leaders, but to teach our current ones and better understand current perceptions and ways of thinking. This is the biggest missed opportunity of the film - in its determination to make it only about Anita Hill (certainly a worthy endeavour), it doesn't dig into the reasons why men like Clarence Thomas think the way they do and why there are people to this day that don't believe a word of Hill's testimony (there were additional witnesses at the time who were ready to describe similar behaviour by Thomas). The landscape has changed in the last 20 years, but there is indeed still a ways to go. It's a shame that Mock's film won't really help get us there.

My opinion of Anita Hill has certainly grown though. Her continuing classy refusals to talk specifically about Thomas ("though I have my opinions") reinforce another of her statements that "Dignity and courage are much more effective tools". If only Justice Thomas understood this as well...
Posted by Bob Turnbull at 13:20