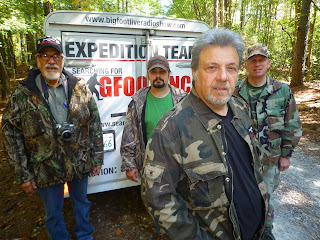 Director Morgan Matthews states right up front that he used to be keenly interested in Bigfoot in his younger days. Years later, that interest has now flipped and turned into a deep curiosity of the people that continue to search, track and believe in the hairy Sasquatch. He follows along with three separate teams - the deluded but honest believers, the opportunist business man and the liar - while they go through their paces to gain any evidence of the long-elusive beast. Early on it looks like the film might be just like any other let's-go-talk-to-crazy-people doc (filled with energy, but not shedding any interesting light on anything), but shortly after all three expeditions are arranged and we've jumped between each team's early preparations with Matthews, we cut to the director lying in a hospital bed. Suddenly we have a different movie on our hands...

Though Dallas and Wayne seem a bit unsteady, they appear to honestly think they have the largest amount of compelling evidence anyone could come across. Sure it's mostly blurry photos, recordings of sounds and anecdotes, but they've devoted their lives to it. They truly seem kindhearted, but a little bit lost and possibly even desperate. Tom and his professional team, on the other hand, have trucks filled with equipment and have made numerous videos of their exploits. They feel they are "this close" to finally nabbing one of the pesky critters. He is easily angered by any kind of intimation that perhaps he may have previously exaggerated some of their findings (actually, many things easily anger him) and he's wary of the camera always being on. The third team is a solo hunter named Rick and his part-time vegetarian intern named Briana. He happens to have some history with Tom: a widely reported hoax by Rick and a friend was initially supported by Tom until proof of the fraud was made public. Rick has now reinvented himself as a professional tracker of Bigfoot and Matthews joins him on a several days-long jaunt through the deep woods.

The film becomes more and more engaging as we learn more about these people, their techniques, self-delusions and possible deceptions. It's all the more intriguing since you know that Matthews is going to face an ordeal of some variety, but with which team? None of them escape looking silly - Rick tripping in the woods while he wears cowboy boots, Tom's admission after a particularly stressful moment that he's had 7 stints in his heart, Dallas calling for Bigfoot using a "shamen language" - but there's also a more serious tone that slides under the entire film as the teams come across numerous other people living in rather desperate and terribly sad ways. Guns seem to be easily acquired, the economy hasn't rebounded for any of these folks and basic needs are a struggle to acquire. It's a clever mix of myth debunking, suspense, silly fun and state-of-a-decaying-nation profile. So how does it end? Well, like Bigfoot itself, you'll just have to see it to believe it.