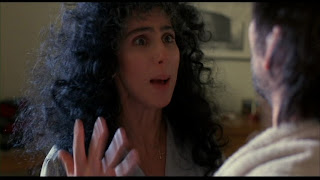 The year was 1987. It was a tumultuous time...A breathless population tried to come to terms with the loss of Shelly Long from Cheers while simultaneously trying to choose sides in the great "Debbie Gibson or Tiffany?" debate. Fortunately Spuds Mackenzie and the announcement of Euro Disney were there to quell the public's fears (not to mention the arrival of Prozac).

Side note: there was also the premiere of a little upstart cartoon series called The Simpsons which created an industry of people quoting and borrowing humourous ideas from it - something which continues today unabated. 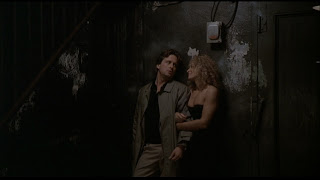 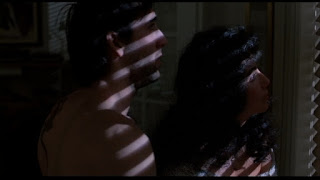 In the movie houses, adultery was on the minds of the American film-goer as two of the year's biggest releases used it as a central theme. Both Fatal Attraction and Moonstruck had characters cheating on their spouses (and almost-spouses) with varying degrees of consequences - none of which appeared to be lasting. Through different approaches and styles (one a sharply written comedy/drama, the other a consistently paced thriller), they each seem to end up at the same conclusion: infidelities certainly can't be swept away, but don't worry since you'll be forgiven. Since Moonstruck's main arc really deals with two suffocating people who stumble into each other (and subsequently allow each other to blossom), that's likely not the fairest assessment of the film. But I'll get to that later.

The story opens on Loretta (played by Cher), a tax accountant who seems to have the market cornered on frumpy. She's unsure about the marriage proposal she's just received from Johnny (Danny Aiello) because she's had bad luck before - in fact, very bad luck since her previous husband was killed by a bus. Now she insists that everything be done just right including the actual proposal (she even makes Johnny do it all over again by getting down formally on one knee in the restaurant). When he tells her he has to fly to Italy for his dying mother, her biggest concern seems to be that they set an official date for the wedding. She doesn't actually want or need him to help, but just agree to the date since all he'll have to do is show up. It's quickly established that Loretta isn't exactly passionately in love with Johnny and even tells her mother (played in Oscar-winning form by Olympia Dukakis) that she doesn't love him. Her Mom's response of "Good, when you love them they drive you crazy because they know they can" sets up the issues she has with her own husband (Vincent Gardenia in a possibly too spot-on casting choice). But back to Loretta for the moment...

As she starts to prep for the wedding, she contacts Johnny's estranged and tormented brother Ronny who hasn't talked to him since he lost his hand in a bakery slicer accident 5 years ago (which led to his fiancee walking out on him too). Since he was handling an order from Johnny at the time, Ronny feels that his brother has taken everything away from him and wants nothing to do with his new fiancee-in-law. As Ronny toils away in the bowels of a bakery basement, Nicholas Cage plays him with zeal and, well, a great deal of Nick-Cagey-ness - his monologue about the loss of his hand is unhinged, over-the-top and admittedly quite entertaining. The movie already feels a bit cornball at times with its accordion music (the characters are of Italian descent you see...) and its opening titles playing under the obvious tune "Amore", so Cage's broad performance doesn't distract. Loretta manages to convince him to meet with her at a later time and their heated argument ends with the two of them in bed together. And all of this just happens to occur on an evening with a full and brilliant moon out the window... 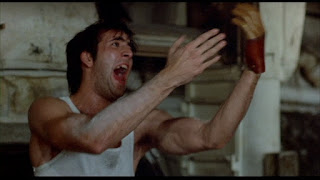 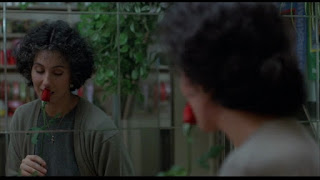 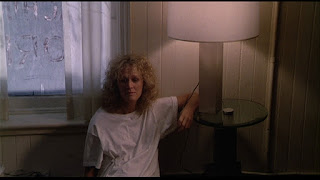 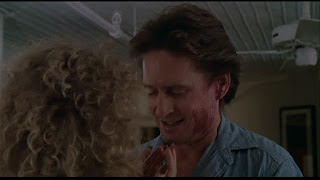 Fatal Attraction is more blunt in its approach. The background: Successful businessman with beautiful, loving wife and child, good friends and no financial worries; The issue: He doesn't get sex when he wants it (dog, child, tiredness all block his path); The Turning Point: While his wife is away, he has a weekend tryst with a very willing partner who is also very creative in her sexual exploits; The consequence: His "mistake" goes crazy, attacks him and his family and he must resort to drastic measures to restore the family unit.

One way to look at this film is to simply break it down as a thriller and look at its style and craft - on that front, it works pretty well. Director Adrian Lyne constructs some tense moments and scenes, brings creativity to their staging and keeps the pace reasonably brisk. Even knowing the outcome of the film (and having seen its final climax before), it still kept me watching. Though there are issues - the "easy" banter between friends doesn't feel overly natural; Anne Archer is given very little to do as "the wife" for most of the movie; Glenn Close's psycho-lady transformation goes a wee bit beyond the tone of everything else (as opposed to Cage who fits in with Moonstruck's reality) - as a straight up thriller, there were enough "memorable" moments that obviously contributed to the word of mouth which drove a boffo box office. Bunny rabbits, bathtubs and large warehouse elevators were likely part of water cooler conversations back in the day.

A different way of analyzing the film is as a message movie. At the time, much was said about it being a warning to men not to cheat on their spouses and a testimony to a strong marital bond. The recent view of it has shifted somewhat to it being described as terribly misogynistic and a male fantasy. While I don't necessarily agree that the film has a hatred of women at its core, there certainly is a deep seated lack of respect for them going on. Looking at the main characters, the women seem to have two varieties: they can be meek and dependent on men or they can be unreasonable, insane and selfish. Granted, the husband is a jerk since he commits adultery just because he can (it like just wasn't fair that, you know, he wasn't getting sex when he wanted it) and he makes so many wrong and stupid moves throughout that you do have to question how he rose to any position of prominence in the business world, but he is also allowed to have more moods and thoughtful states as he multitasks his work, home and deceptions. His mistress gets to be either a seductress, a needy simp or a whacked out loonie while his wife is either wallpaper, useless or raving mad. Empowering this movie is not. 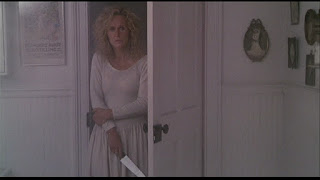 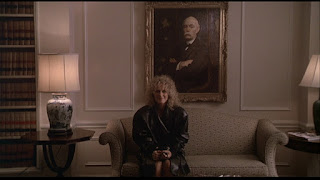 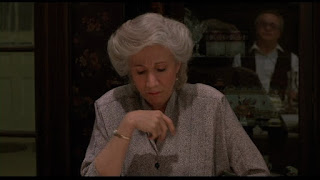 Though Moonstruck certainly provides a wider palette for Cher's Oscar nominated performance as Loretta, it fails her mother's character Rose. Not that Dukakis isn't excellent in the role - she has fantastic timing and a few moments of wonderful subtlety (in an oft not-so-subtle movie) - but her acceptance of her husband's cheating ways was a severe flaw in the film for me. As mentioned earlier, she loves the guy so I can appreciate someone wanting to work through issues of this variety with their spouse. But the revealing moment is during a conversation she has with a man she has met at a restaurant (played by John Mahoney) who walks her back home one night and indicates his interest in pursuing things further. She isn't really interested, but does use him as a sounding board regarding why men chase women. Her own theory is that they do it to feel young since they fear death. It's an awful rationalization of her husband's exploits ("oh, he's sowing some remaining oats..."), so when she excuses herself from any further dalliances with Mahoney's character claiming that she "knows who she is", it feels like she should be suffering from cognitive dissonance.

Like Douglas' character in Fatal Attraction, it seems like Rose's husband Cosmo simply cheats on her because he can (he shows no strong affection for his mistress either). Back to back, these two movies feel like an awkward apology: "Thanks for understanding that we just can't help cheating on you Sweetie. You know, we really do feel bad when you find out...". Rose and her husband are only a supporting thread to Loretta and Ronny's story, but it undercut the film for me. Loretta ends up cheating on Johnny because she finally feels passion for someone and is able to admit that her engagement is simply because she just feels she needs to be married (especially when asked "Why you wanna sell your life short?"). In both the story and the opera to which Ronny takes Loretta (La Boheme), moonlight has stirred the initial embers and one can forgive the too-easy final reconciliation of Johnny and Ronny. But when Cosmo only has to deal with a simple lecture, it feels wrong. 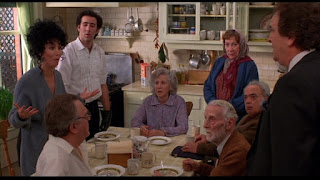 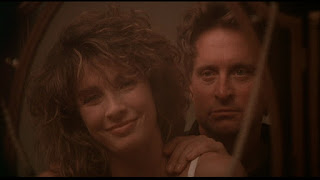 So too does the final zoom to the family unit photo in Fatal Attraction - sure, Douglas' husband character has been through a little slice of hell trying to stop his crazy mistress, but that last shot indicates that everything can simply return to normal now. Phew, now that we've cleared up that little problem, let's get back to fixing up our new house dear...Especially since he manages to rationalize that, though he made a mistake, it wasn't really his fault. For example, while having dinner together before their first roll in the sack, they have the following conversation:

Her: "...and you're here with a strange girl being a naughty boy"
Him: "I don't think having dinner with anybody is a crime"
Her:

Seriously, the dude has some nerve...He feels guilted into seeing her again the next day and yet they have a full-fledged date - walking the dog in the park, cooking dinner while listening to opera (the foreshadowing as he talks about the last act of Madame Butterfly is a bit heavy), sensual dancing, more sex...It's certainly that little extra spice he thought was lacking in his marriage, but what did he think would come of it all? 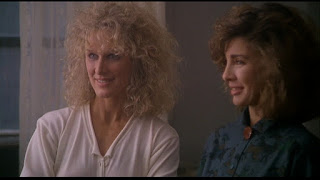 Perhaps I'm misreading both films and they are meant to wake up women to recognize that their men are flawed and that they must assume a degree of control. If that's true though, it would apparently mean that they must also forgive and forget the weak wills of their men. They just can't help it you know... 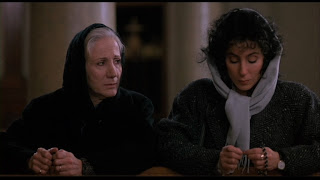