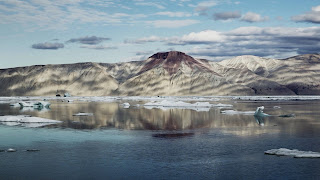 One of the old adages of filmmaking is that you need to start with the story, focus on that narrative and build from there. Documentary film isn't overly different, except that in some cases it can find its narrative as it goes along (or is found in the editing process). Typically, though, the film will still be crafted in the end to create a full story arc. Daniel Dencik's The Expedition To The End Of The World chooses another route. By assembling a rather diverse crew of scientists, artists and adventurers on a single ship diving into the inlets of Greenland, Dencik has meshed together their different reasons for making the trip, their different tasks and experiments, and their very varied philosophies into a large tapestry of perspective on the results (and potential results) of global warming.

Though there is essentially a beginning and an end - as the gorgeous ship enters and exits these inlets that have rarely, if ever, been explored - the rest of the film flips and flits between the ship's passengers to see how they are spending their time. It varies...Some perform experiments that include hooking up hang gliders to motorized rafts, drilling down to the permafrost and even discovering new lifeforms while others paint, draw, write or get into long discussions about the nature of man. The conversations are oddly unemotional and free of politics: some of the scientists admit they are more interested in the process of global warming than they are in what it does to humanity, while one of the artists (the film's most entertaining character) simply states he doesn't care since we will just adapt.

It's an interesting point of view, though probably better expressed by one of the scientists - he states that whenever a life form has just about evolved to meet its surroundings, it starts to have enough of an impact on them so that they need to restart the evolution process to fit the new surroundings. In his view, that's exactly where humanity is right now. The constant impending doom of the film - its soundtrack, the massive icebergs (some crumbling right in front of the camera), the ideas being debated - might make those statements seem ominous, but the humour of these men and women, the occasional blasts of Metallica emanating from the ship's deck and the absolutely stunning scenery and surroundings (I haven't seen a more beautiful film in quite some time), certainly bring some positive hope. As one of the adventurers says: "Life is everywhere".