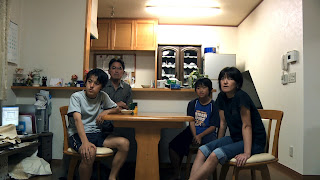 Ryuichi Ichinokawa's wife doesn't know what he does for a living. And she doesn't really seem to care..."Without meaningful conversation, any relationship withers. I guess I just gave up on him. As long as we can pay the bills, I don't care what he's doing anymore." He is either out at work, uncommunicative on the computer at home (when she says the above quote to the filmmakers, he's right there in the same room on the computer and has no reaction) or sleeping. He thinks she has a negative attitude, stopped supporting him long ago and cares more about what her friends think than what he does. Short of his obsession with one day getting to Hawaii, they no longer have any ambition, hopes or dreams and assume the worst about each other. They are two very lonely people and Ryuichi wonders how much longer they will stay together after the kids have both gone off to school. So it may seem odd that the name of his company is "I Want To Cheer You Up Ltd".

Ryuichi's business provides the service of having himself or one of his extended team come and pose as a family member or friend for the client. Weddings tend to generate a lot of business as brides and grooms want to fill out their side of the aisle with additional people to show their worth (Ryuichi has even sat at an honoured guests table and even made a speech), but it seems like just about any situation might suddenly need a fake family member present. He's played the husband for a woman trying to get her Ex to provide for her kids and a father for a girl whose boyfriend wants to ensure he has the right blessings before they move in together (her real Dad would never approve) while also having a team of about 30 other people who can take on any role required. The need for all this fakery seems to stem from many people's concept of family honour and the need to represent a strong family and set of friends to others - which makes everything quite ironic when they use Ryuichi's service to create layers of new secrets and lies.

My initial interest in the film stemmed from it sounding like a real life version of the events in the Greek film ALPS (based around a team of people who take on the role of their clients' family members to re-enact scenes from their life). As interesting as that facet of the film is, it's actually a stronger match with Kiyoshi Kurosawa's Tokyo Sonata - the story of a man who can't bear to tell his family he lost his job. Ryuichi is still very much a follower of the patriarchal society and is searching for his validation and respect through his customers since he doesn't appear to get it at home (he talks about how they used to celebrate Father's Day, but don't anymore...). He claims that he simply wants to make his clients happy and help steer their lives in the right direction - mostly due to the fact that he is deeply unhappy himself and doesn't see a way out. A fascinating look at one man's broken dreams and the broader implications of a culture that places importance on what other people think of you.