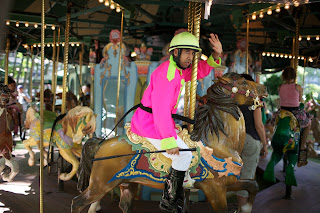 Having seen numerous examples of their good-natured public pranks online, We Cause Scenes was pretty much exactly what I wanted in a documentary covering the history of Improv Everywhere. Aside from a few minor blips along the way, there's no backstabbing, terrible secrets or battles against demons to derail them. Just the uplifting story of one guy, a whole pile of his friends and how they wanted to bring a bit more happiness to people's everyday lives. They were also ahead of the curve in that they got on the web in the early days of blogging, had tons of video ready to go when YouTube started and jumped in with both feet to High Def. It's easy to see why they've built their following - mission by mission - from local friends to similar groups doing similar events around the world.

The first I heard about this merry band was the Best Buy gag: a sizable group of people all wearing blue shirts and pale khakis (the same look as the uniform of Best Buy employees) each entering a single Best Buy store and simply standing around and lingering...If asked a question or mistakenly considered to be an employee, they would just say they were waiting for someone. It's a funny concept and, as it played out in an edited YouTube video, an even funnier implementation. Granted, it perturbed several actual Best Buy employees and managers, but the overall impact was to put smiles on the faces of a pretty large chunk of random shoppers that day. And that was always the ultimate goal: do something that for people who saw it, turned into "their" story and experience which they could race back and tell their friends about.

Charlie Todd (the brains behind the operation) and some friends started doing things on the cheap - the no-pants subway rides, having a costumed Princess Leia suddenly encounter Darth Vader on the subway, having jockeys pretend to race on a carousel, etc. - and these were the perfect way to build the audience initially to get people invested in what they were doing. The film plays out somewhat like a DVD commentary on their gags - there's nothing wrong with that as it kept a smile on my face for most of it - but it also might have been more interesting to dig further into reactions to these events, issues when they backfire, how stores and authority figures react, etc. It's a minor complaint in that the film already touches on these subjects and its good will is in abundant supply. I initially had a few worries that the troupe might have been involved in more pranks involving the embarrassment of their victims, but fortunately they stay true to their maxims - bring some unexpected joy to random strangers.