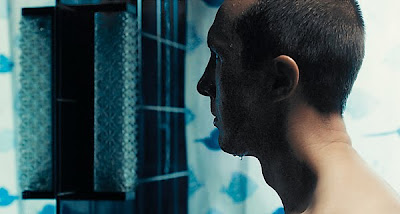 The 82 minute run time of The Ape is designed with a single purpose in mind: to put you in the shoes of someone living solely by instinct (though very poor instinct for most of the story). Struggling at every step of the way to make decisions, Krister is having a really bad day after a particularly regretful decision made the night before. The film builds the tension as he staggers, drifts and stumbles from one spot to another and his desperation and his helplessness is palpable in every frame. At each juncture, even though you don't have much information as to what's going on, you can't help but try to put yourself in his situation and wonder what you would do. In Krister's state, though, it's not like he knows much more than we do...

And that's how he's operating - gut feel, chance encounters and daily habits guide his every move. After waking up on the floor of a bathroom with blood on and all around him, Krister washes up and goes to work. He's confused and disturbed, but also somewhat on autopilot since he still ensures that his cell phone ear piece is with him wherever he goes. His day at work (as a driving instructor) doesn't last long as he almost physically attacks a student and then just leaves her with the car to get back by herself. 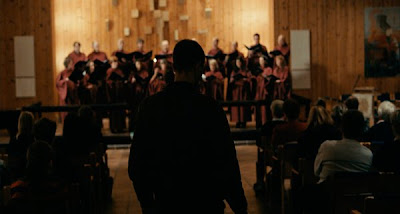 The strong reaction to the circumstances surrounding Krister is achieved by using handheld cameras that follow Krister everywhere typically with tight closeups or at most medium shots. There's no score or soundtrack except for the noises around Krister, his own laboured breathing and the occasional sudden loud roaring or crashing (a bus going through the frame, trains, metal falling, etc.). Just a little something to add to the jumpy sensations you already have and to bring you just a bit closer to Krister's own state of mind.

I haven't said much more about the plot partially because that's how the film is being sold - go in blind without knowing where it's going. Which, by the way, is exactly how lead actor Olle Sarri had to approach each day's work since he didn't know scene to scene where things were leading or what the backstory was. More specifically, though, the plot is pretty much irrelevant. It's all about the continuous creep of tension and stress on Krister. Have you ever had one of those moments when so much is twirling in your brain that you can't actually think clearly or logically about your next step? And your feet seem to be in cement? Eventually you start doing something or walking somewhere out of pure instinct, but not before a couple of false starts. That's this movie in a nutshell.

It may not be "entertaining" (as even director Jesper Ganslandt warned the audience it wouldn't be), but you'll likely experience exactly what the film wants you to feel. 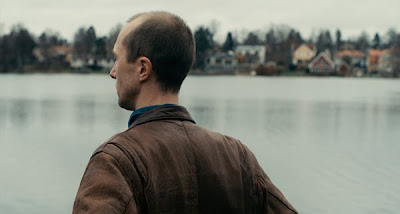