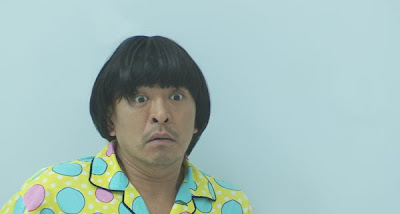 WTF has a new poster child and its name is Symbol.

Whether it's the storyline of the preparations of a Mexican wrestler named Escargotman for his latest fight or that of another man completely sealed in a white room who slowly but surely works towards an escape plan, Hitoshi Matsumoto's (his previous film Dai-Nipponjin aka Big Man Japan appeared at TIFF two years ago) latest film is a head-shaking, sometimes frustrating and sometimes hilarious experience. I suppose it's not fair to attach the WTF label to it, but I guarantee that at least several times during this film you will utter the full version of that acronym to yourself - and possibly even aloud (I know I heard it from a couple of different folks). Feel free to use any of a long list of possible substitutions for the letter 'F' (farg, frig, frak, etc.), but I expect the sentiment will be the same.

The opening scenes take place in Mexico where we meet a foul-mouthed dangerous driving nun, a kid spoiling grandfather and a wrestler who likes to wear his mask around the house. They're all part of the same family and are getting ready for Dad's bout later in the day. There's little wrong with these scenes in and of themselves, but there's also little to engage the viewer. The wrestling match itself is solid too, but nothing of overly strong interest actually takes place when we cut to the Mexico scenes. The question lingering in your mind, however, will be "How in the hell does this have anything to do with the guy in the yellow pajamas flailing about in the white room?" and I expect that's exactly the design point. 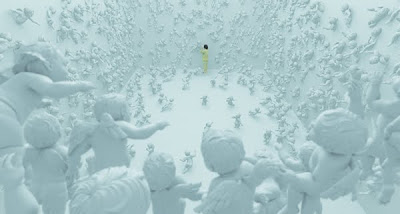 The scenes with the unnamed man in pajamas (played by director Matsumoto himself) are split into three sections: The Education, The Implementation and The Future. It's hard to describe this portion of the film too much without giving away any of the strange, funny and downright goofy surprises in store for the viewer - such as knowing what the many "buttons" that appear in the room really are and what each one does when it is pressed. The man isn't the sharpest tack in the box, but that just makes it all the more fun to go along his trip of discovery within the room. There's a good mix of randomly silly and relevant occurrences so that you're never quite sure if something that has shown up or happened might be useful later on. The various escape plans the man devises are probably the most entertaining aspects of the room segments, especially when we see him visualize the actual escape through cartoon panels while snapping his fingers along to a great funky tune. Some of the other comedic moments don't work quite as well, though, since Matsumoto goes for some pretty broad reactions to what happens to him as well as repeating and stretching out some of the gags. Fortunately, even with the occasional returns to the less than exciting Mexico bits, there is still enough going on to keep you wondering what you could possibly see next.

So how do the two segments relate? Even if you could somehow tie them together in your mind, you still won't come close to guessing. The more important and interesting question is "where does it go from that point on?", because that's when things really open up. Feel free to bring in the metaphysical, the religious and the philosophical when discussing what it all symbolizes. There's no wrong answer...Just make sure to show your work. 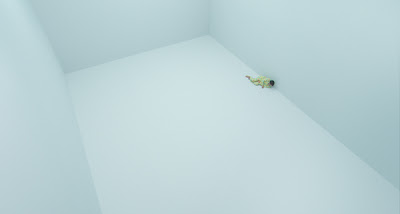