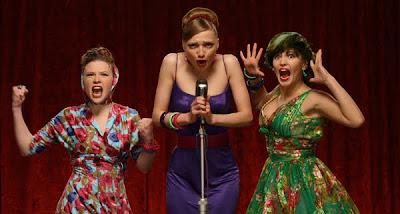 Though not quite the perfect blast of music, dance, colour and energy that it could have been, the Russian musical Hipsters is actually only a bit shy of that and without a doubt one of the most fun marriages of music and film I've seen in awhile. It's a bit of a cross breed of Grease and Dirty Dancing, but with more smarts, a story that tweaks cliche situations and a full painter's palette that gets splattered across just about every scene. The main flaw of the film is that it doesn't quite keep the energy flying high for its entire length and occasionally cuts scenes just as they are at their most fun. The story, though surprising in numerous spots, takes a few odd turns that stall the mood a bit, but in the end there's still plenty of enjoyment to be had.

Polly and her friends are the hipsters - a crew of young rebellious teenagers who love American jazz, poodle skirts and outlandish hairstyles. In prim, proper and very grey-looking 1950s Moscow, they tend to stand out and often get "raided" by the communist youth group. One of these young communists is named Mels (after Marx, Engels, Lenin & Stalin) and he gets immediately smitten by the music, fashion and sexual energy of the hipsters. Not to mention the beautiful Polly. Before you know it, he's buying black market ties, jackets and a saxophone. His eagerness for the music allows him to merge into the hipster gang pretty easily and he and Polly begin to form a relationship. This doesn't sit too well with his youth group or its leader - the also gorgeous, but much more harsh edged Katya. 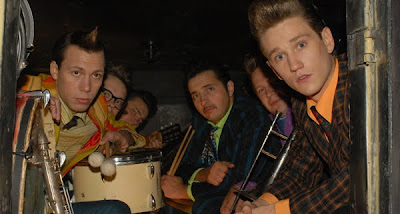 The youth group just doesn't understand the rebelliousness of Polly and her friends. "Why don't all the people want to live like everyone else?" they wonder. Everything the hipsters stand for (they are considered to be kowtowing to U.S. culture) is thought to be against what is good for the party and a gateway to further criminal activity. The saxophone, in fact, is thought to be a step away from the switchblade. Fortunately, any of this political commentary and slight satiric content is relatively subtle or rolls comfortably into the musical numbers and story of the young couple. Those numbers, of course, are the highlights of the film. They contain lots of closeups, broad reactions and even cheesy moments, but are all done in a knowing fashion. The songs are typically in the swing style and pretty much fit the definition of "toe-tapping". There's serious moments a plenty throughout the story, but it never loses sight of the fact that it's supposed to be fun.

And it is. The cast is filled with naturally charming and dynamic actors - in particular Oksana Akinshina (Polly) who has also appeared in Lilya 4-Ever and The Bourne Supremacy - and there are many moments of breezy casualness that just carries the audience along. It's too bad that it seems to second guess itself at times though. Early in the film, for example, as Mels (now called the more Americanized "Mel") is being given dance lessons by his new friend Bob, the duo begin dancing all around the apartment. It's a bit reminiscent of the silliness of the scene in Footloose where Kevin Bacon teaches Chris Penn to dance, but far less awkward and much more enjoyable. Until Bob's mother walks in on them that is, and the number gets cut short just as it's picking up steam. There are several moments like that throughout the movie that impact the overall momentum which was building up - you end up never quite reaching any jump-out-of-your-seat moments.

By movie's end though, my toes had sure got a good workout and I left the theatre smiling pretty broadly. 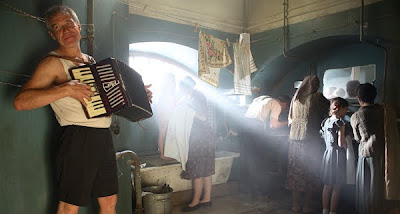