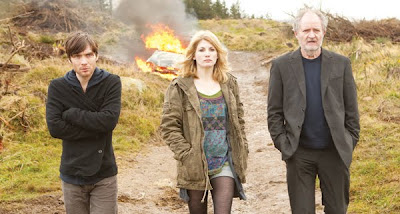 Waking up with a hangover and seeing your loan shark's collection agents (ie. the muscle) standing right next to your bed is a pretty nasty way to start off your day, but it's going to get a whole lot worse for Michael (Cillian Murphy). No one can lend him any money, the beautiful girl downstairs he's in love with is suicidal, his Dad is 100% positive that he'll die during his next sleep and, after a "misunderstanding" of sorts, Michael now has a bounty on his head. The next few hours will lead him (and the viewer) down many unexpected paths, but fortunately, as the seemingly omniscient narrator tells us, "There's a point to this."

Working in a similar vein as Guy Ritchie's early films (street level crime filled with unique, interesting and funny characters), but with much less self-conscious style to it, Ian Fitzgibbon's Perrier's Bounty strikes me as a sure-fire crowd pleaser. Its plot keeps taking little detours off the expected routes and creates its own twisting turning ride - just when you think you know what direction it's taking, something happens that pretty much quashes that thought. Along with the terrific performances, a cast of interesting characters that weave in and out of the story and another superior David Holmes score, the film provides a top notch, dynamic and wonderfully entertaining journey. There are some familiar scenes and moments that are from the playbook of similar films, but here they all feel right for this particular story since there's usually some additional touch or angle to them that wasn't expected. 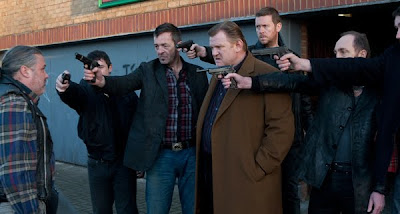 As Michael tries to figure out how to repay the money and avoid the bounty on him, he comes across coke dealers, dog trainers, crazy old female farmers and parking cops. But the one guy he's really trying to avoid is Perrier himself. As played by Brendan Gleeson, he's a charming, quick wit with a friendly smile and a gay-friendly work environment, but can also be a big burly bastard who won't think twice about screwing you over and killing you. Gleeson plays the role with relish and makes for the type of villain you're always sad to see leave a scene. As for Michael's Dad, Jim Broadbent plays sleep-deprived wide-eyed enthusiasm like he's been living it for years. As he tries to keep his mind working to stay awake, his conversational gambits become a bit blunt, but he has a kind heart at the root. At one point he blurts out to Michael's neighbour "You suicidal? Sorry to hear that."

As great as the characters and script are (the dialogue is sharp - never just random wise cracks), it's the free flowing plot that really provides the constant forward momentum and all the fun. However, it's still well-constructed underneath - there are various characters or things that show up and then come back to further effect later in the film all without feeling contrived. The journey is the important thing here, even though you really want to see where it ends up once the narrator has told us about the "impending heartbreak". It pretty much ends where the narrator indicates it will, but you can't help but wish the ride lasted a bit longer. I look forward to a wider release so I can see it again. 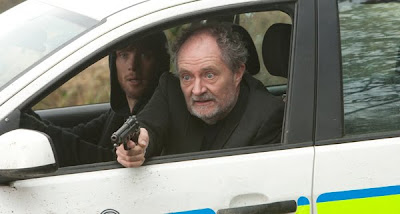