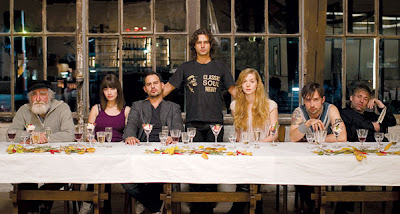 Food. Music. Sex. Family. Depending on the person, each can be thought of as a kind of "food for the soul". They all make up significant parts of Fatih Akin's latest film Soul Kitchen which, complete with scenes that rival Eat, Drink, Man, Woman and Big Night for their capacity to make you want to reach through the screen to grab the food on display, focuses on many of the joys of life. It ends up being somewhat of a meta-film: It's about food for the soul, but it also becomes food for the audience's soul too.

Not that it's perfect mind you - it has a plot arc that is overall fairly predictable, several clunky scenes and one or two performances that aren't quite consistent. However, it's wholly entertaining, never slips into "turn your brain off" silliness and provides several absolutely joyous moments celebrating all those varieties of food for your soul.

Zino owns a restaurant called "Soul Kitchen" in an old warehouse. It's packed with old tables and chairs and dishes that don't quite match. He's got his core crowd, though, and they come back for the fairly basic food that serves their needs. He's already pretty stressed, but life takes several turns for the worse after he wrenches his back, gets informed he owes taxes, finds out his girlfriend is leaving for an extended trip to China and runs into an old "friend" who has designs on his warehouse property. The movie follows his and his restaurant's ups and downs for the next few months as new staff, new customers and new relationships all factor in. 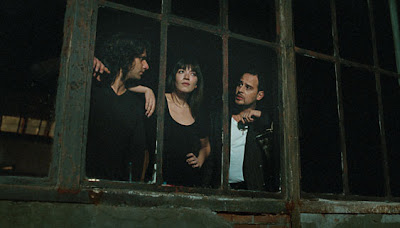 One of the new staff is Zino's brother - a jailbird who is out on day parole and is seeking some meaningless job in order to help meet the requirements of being allowed out. As Zino starts preparing to join his girlfriend in China, he considers turning the restaurant over to his brother. He's also hired a cranky perfectionist chef who verbally abuses and threatens customers if they dare to ask for a change to the menu. As the food improves, so does the music - his brother begins to DJ and another employee brings his band (and its fans) into the space for practice sessions. There's a great deal of churn in Zino's life and his back is still screwed up, but the restaurant is more popular than ever. Of course, that creates its own set of problems.

Twists and turns abound in the film - not huge ones, but small ones that make the trip from A to the inevitable B more than a simple straight line. As well, it's a great deal of fun to spend time with these characters (even the minor ones) as they are, for the most part, fleshed out. In particular, Zino's brother Illias (Moritz Bleibtreu of Run, Lola, Run fame) and the restaurant's spirited and ornery waitress Lucia (Anna Bederke) are standouts, especially when they go beyond flirting and take things to a new level during a wild night at the restaurant after the chef has spiked everyone's desserts with a powerful aphrodisiac (Lucia's ravenous gaze towards Illias is a clear indicator of the potency of the additive). The patrons feast on the new menu and gorge on the music as well. One would expect some great tunes simply due to the title of the film, but across several styles I don't think there was a single duff track. The music matches extremely well with several terrific scenes of laughter, dancing and celebration in Zino's restaurant. It's a place where the clientele can fuel up on the nourishment that body and mind require. It sure did me a lot of good as well. 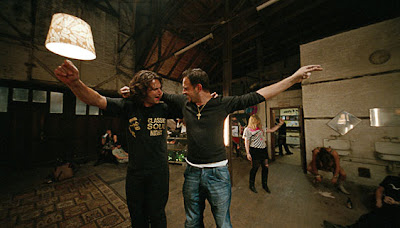 This was my second last TIFF film and I enjoyed it so much, I wanted to end on its high. So I ended up skipping City of Life and Death, which I'll catch up with later.

Hope to see this again and bring a few friends along. Maybe dinner afterward, too? :)

Oh yeah, a feast afterwards would do the trick. I'm glad you liked this as much as I did. I expect it should get pretty wide North American distribution (at least on DVD).

Of course, that's what I thought about "In The City Of Sylvia" and it still hasn't come out and I still haven't seen it! Grumble...