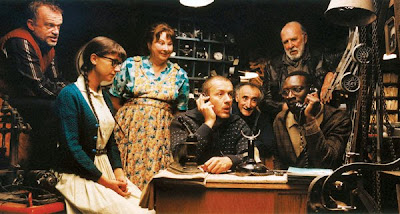 Jean-Pierre Jeunet knows how to please his fan base. His latest film Micmacs A Tire-Larigots (for the most part simply called Micmacs in North America) is chock full of his patented set design, quirky characters and Rube Goldberg type apparatus, and from start to finish it's crammed with more inventiveness and creativity than many directors manage in entire careers. Granted, if you aren't a fan of previous films like Delicatessen and Amelie, you won't likely be converted, but if you are then there's little chance you'll be disappointed - in fact you'll likely be thrilled.

The film came in 3rd place for the Audience Award at the end of TIFF, so it was a feeling that was obviously shared by many. Along with the gags and wonderful artistry, the movie also contains the story of a man down on his luck who, through the help of his new found family, rises back to achieve happiness and even some revenge against those who have wronged him. If that feels like I'm giving too much away, it doesn't really matter. Don't worry, even though the story does actually follow that arc (as well as contain an overall theme decrying weapons manufacturers out purely for profit), it's not the main point of the film. Neither are the characters - each one is a fine, though perhaps fairly standard, version of characters Jeunet has used before (portrayed by many of the same actors). None of these things are the reason why the film works so well.

It's the production design...From the houses and buildings (the video store where our hero Bazil works, the offices/apartments of the competing presidents of nearby weapon manufacturers, the junkyard home of the rag tag group of scavengers Bazil falls in with) to the wonderful thingamajigs that the group's inventor builds (mechanical characters and devices used to do menial tasks) to the lengthy and intricate set pieces the entire group participates in to help get Bazil his revenge, the film never stops its joyous hopping about and feels like an ode to unencumbered creativity. The story of Bazil's revenge is enjoyable and the characters do have numerous fun foibles (e.g. the young Calculette who can immediately estimate weights, distances and speeds), but they seem to have been fit in to serve the sets, gags and inventions. Now that's not usually a good plan - creating props and little "bits of business" and then shoehorning a story into it - but it works like gangbusters here.

Of course, I'm overstating things. The story had me engaged and looking forward to the end comeuppance of the evil Corporate presidents, so things weren't obviously forced into the sets after the fact. I do wish the characters were given a bit more time to expand on their personalities, though, as we would've been a bit more involved in subplots such as the budding romance between Bazil and the contortionist. Which leaves Jeunet's film just short of being perfect. Fortunately, it's superbly entertaining, constantly surprising and leaves you grinning ear to ear. I guess that'll have to do. 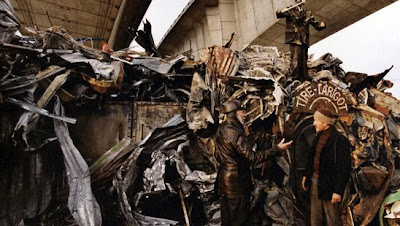