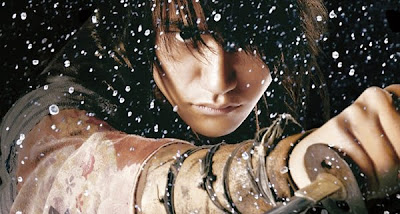 If I'm being kind, I'd say that Yoichi Sai's "post-modern sweeping Ninja epic" (as per the festival programmer's introduction) of the 1960-70's manga "Kamui Gaiden" (also known as "The Legend of Kamui") is a pretty faithful recreation of a graphic novel's frame by frame storytelling - cheesy CGI and all. If I'm being honest, I would say that's also its biggest problem. Short of a few scenes, much of the action and story feels like it is indeed taking place on a flat cartoon panel and never seems to realize it's a filmed adaptation. The 2-D space applies itself to the characters as well since they show very little depth and, consequently, very little reason to care for them.

It's not the fault of the story itself, though, since there are numerous interesting aspects to it. During the Tokugawa period in the 17th century, a young boy named Kamui is ostracized from his community. He's always felt like an outcast and so decides to build up his strength and speed in order that he may one day leave and find freedom for himself. Unfortunately, after striking out on his own he finds that he has few options outside of becoming a Ninja. His skills are already quite strong so he joins a team that hunts down former Ninjas who want to leave the life. As any Ninja warrior should know, you may be required at any moment to kill just about anyone - man, woman or child. For Sugaru, a formidable opponent that Kamui and his team battle, it's too much for her to continue killing without justification. The fearless battle in which she engages the Ninjas leaves a strong impression with the boy. 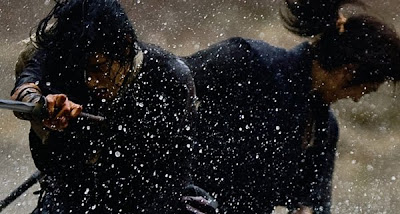 Many years later, Kamui has become a young adult and has developed a set of secret moves that put him a cut above the rest of the Ninjas. It's at this point that he too decides that his time has come to leave the life of killing and find some of the freedom he's been desiring since an early age. He almost finds it too: through numerous circumstances, Kamui ends up on the run and in a fishing village where he not only shares his secret with a former opponent, but may have also found himself a quiet happiness. It doesn't last long, of course, and he has to face traitorous behaviour, an emperor's bounty, a ship full of pirates and massive sharks.

It all sounds like meaty stuff for a good Ninja film chock full of battles. There are actually some early scenes that promise a fun romp ahead (using what seems to be not-quite-finished CGI effects, Kamui displays his Izuna Drop and Mirror Mist Kill moves), but it loses its way when Kamui gets on the bad side of the crazy, power hungry emperor and he meets Hanbei the fisherman. The fun drains from the story and there's not much inventiveness in bringing to life the characters. The special effects are very much short changed by this point too since we've gone beyond fight scenes and into big ocean storms and other events that are peripheral to the Ninja arc of the story. In particular, the huge killer sharks that encircle an island - the effects on them put me in mind of Shark Attack 3: Megalodon and that's not a good thing (I'm overstating it a bit, but I can't help the fact that the comparison popped into my head). Sai makes use of some good framing for many of his shots that seem to map to storyboard panels, but I never felt that he took it much further than that.

Having seen Sai work wonders with the story of Quill the seeing-eye dog (his 2004 film that avoided all the trappings of what could easily have been excess melodrama), I had confidence that Sai could put a new spin on a strong Ninja tale. From the post film Q&A with him, it appears that the Kamui Gaiden manga were of particular importance to him as a young man. My impression is that perhaps Sai couldn't quite remove himself from his reverence for the manga to create an intriguing and visually exciting tale. 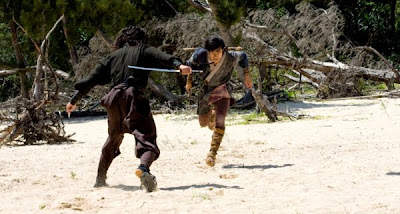