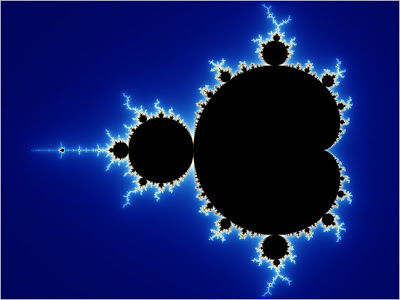 Benoit Mandelbrot was a hero to me. Not in the sense of a firefighter or anyone who has risked their own personal safety to save another life, but as someone whose hard work and brilliant mind has helped to foster my sense of wonder. As the discoverer of fractals (in particular the staggering beauty of the Mandelbrot Set), he's helped us look closer at our natural surroundings and find patterns where we thought none existed.

The next time someone utters the word "awesome", show them this. Now this is awesome...

From the NY Times story of his death last week:

How long is the coast of Britain? The answer, he was surprised to discover, depends on how closely one looks. On a map an island may appear smooth, but zooming in will reveal jagged edges that add up to a longer coast. Zooming in further will reveal even more coastline.

“Here is a question, a staple of grade-school geometry that, if you think about it, is impossible,” Dr. Mandelbrot told The New York Times earlier this year in an interview. “The length of the coastline, in a sense, is infinite.”

Charming, modest and sharp as a tack, here's a fascinating lecture he gave just earlier this year. The world is a little less wide-eyed and awe-struck now that he's gone.