Pssst. Looking for some horror? Come right in...

Splice (2010 - Vincenzo Natali) - Your feelings about "Splice" may very well depend on your familiarity with and enjoyment of older sci-fi and horror creature features. In both, the scientists need to be blind to the obvious issues while also being remarkably intelligent, the plot must allow for their experiments to continue even when permission and funding run out and the acting is ratched up a notch or two (sometimes even three). If you expect or at least can handle those elements, you might very well have fun with "Splice". Not that it's exactly like those earlier films...The special effects, of course, are much more modern and, for the most part, seamless, but the plot also advances the typical scenarios of creature features and takes them further down the path. It can be a bit silly, but once the scientists utter the words "what's the worst that could happen", you should be expecting and relishing that. Feel free to analyze the film for further statements regarding societal impacts of genetic experiments, but don't forget to have fun with it too. 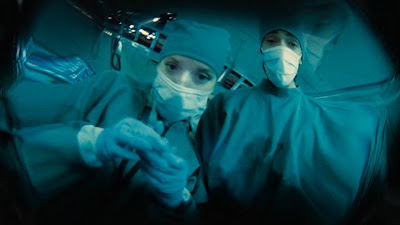 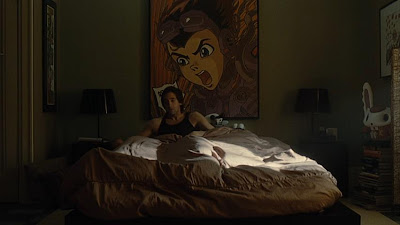 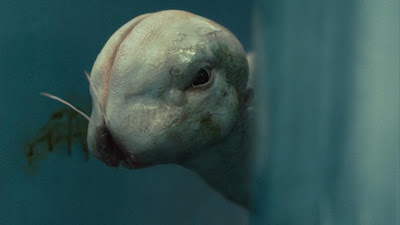 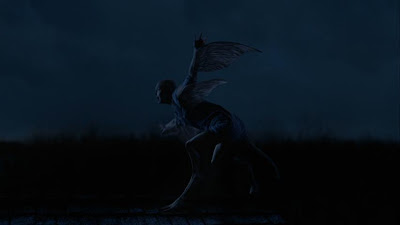 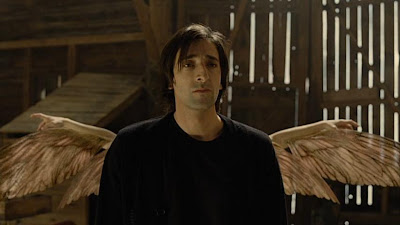 They Wait (2007 - Ernie Barbarash) - I've been reasonably lucky with the straight to DVD picks I've been gambling on so far. Typically I've been choosing the ones that are closer to being ghost stories than slasher or monster films and the success ratio has been distinctly higher with that approach. "They Wait" is another example. A young couple and their six year-old son return home to North America from Shanghai for a family funeral, but it is unfortunately timed to coincide with Ghost Month - a time when the gates of Hell are open to angry spirits to return to terrorize the living. The building where they are staying during their visit contains some hidden family history that needs to be revealed once the young boy gets possessed by one of the ghosts. The secret to this type of film is not to rush through to the jump scares and to take its time in developing the atmosphere around the characters as well as a feeling of dread. For the most part, the film is quite successful in achieving this. The characters aren't quite as fleshed out as they could have been and the story has some holes, but when the few jump scares do come, they've been earned. One annoyance though...The film specifically mentions Shanghai in an on screen title, but it refuses to name Vancouver (where the film was most obviously shot) - it's always referred to as the "Pacific Northwest". Sheesh. 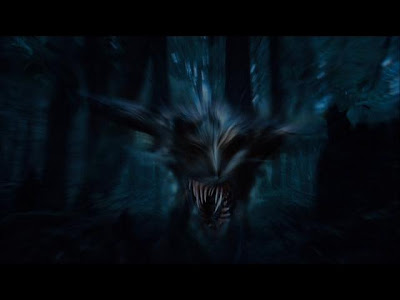 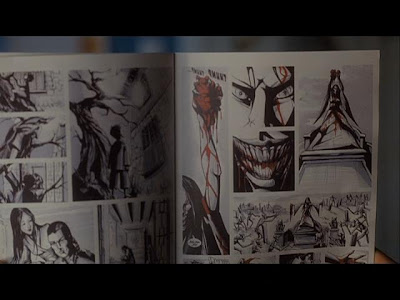 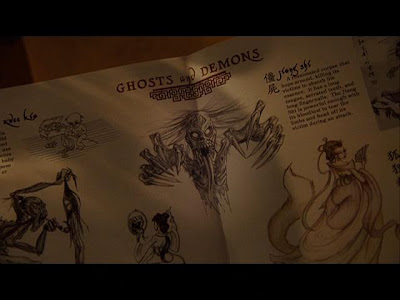 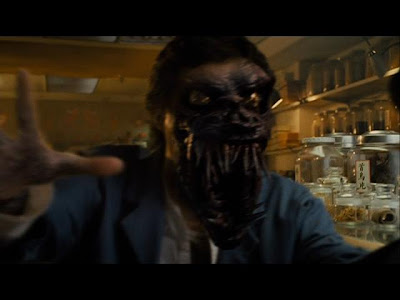 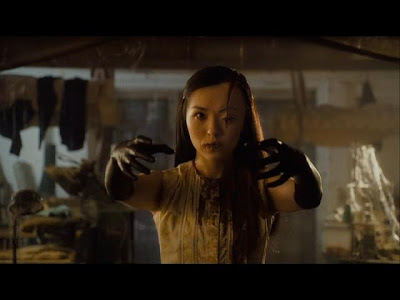 Strange Circus (2005 - Sion Sono) - When I mentioned to a friend that I was going to watch Sion Sono's 2005 film "Strange Circus" this week, he gave me an interesting comparison point to Sono's latest venture: "It's like "Cold Fish" on acid". Having just seen that particular blast of fearless phenomenal filmmaking at this year's Toronto International Film festival, I was rather puzzled. "But, but...", I stammered in response, "how can that be? "Cold Fish" was on acid!". Maybe it was an "Inception" type of multi-layered effect - what happens if you take acid while already on acid while in a dream? Well, I suppose you might end up with something like "Strange Circus". I don't mean to overemphasize the drug angle here since the film does have an overall arc, structure and focus, but after a bright red screen opening quote from Huysmans' "Against The Grain" (considered to be a novel without a plot or any structure) about a girl severing a man's head and bringing it to her mother, a brief interlude at a circus like show that invites its bored, costumed audience to kill themselves on stage and a young girl's walk through a completely blood-red smeared hallway, the hallucinogenic quality of the movie is pretty apparent. The film's method of disorienting the viewer by showing scenes that could be from dreams, in progress novels, past experiences or current reality certainly is a challenge to follow at times, but the bigger challenge is dealing with the central concept of a man who sexually and mentally abuses his wife and twelve year-old daughter. Sono manages to avoid any cheap or exploitative situations, but still emphasize the subservient roles many females are forced into in a strongly patriarchal society - roles that seem to be handed down from one generation of women to another. As with many of his other films, he uses repeated, delicate and well known musical themes to underscore certain moments and to build levels of tension. This time he calls on Bach, Liszt and Debussy to provide his soundtrack. Sono also packs some truly beautiful images into what is overall a truly disturbing and unsettling film. It's yet another example of how Sono has become one of the most interesting, fascinating and completely fearless filmmakers around these days. 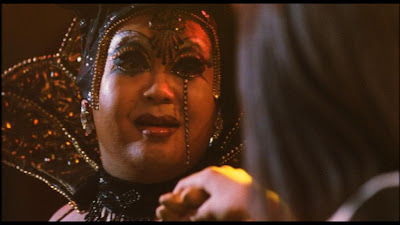 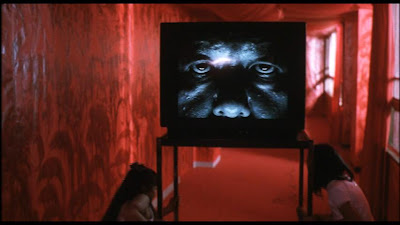 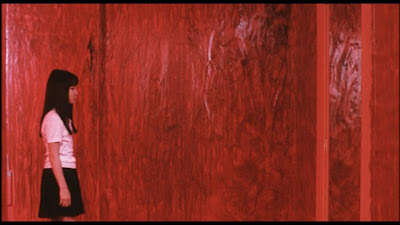 Dead Silence (2007 - James Wan) - Say what you will about James Wan's follow up to "Saw", but this is one very good looking movie. Greens and yellows are hard to come by while blue and grey are the dominant colours. This allows the red (a car, a curtain, a bow tie, blood...) to really pop. There's also some nice framing choices as well as some great depth of field in many shots. How's the story though? Well, it's actually not a bad little tweak to the ventriloquist dummy genre of horror - the dummies in this case are just the vehicle from which the vengeful spirit reaches out. However, in a similar manner to their recent "Insidious", Wan and his co-writer Leigh Whannell get a bit too messy and sometimes just don't know when to stop. Not just by adding too much to the story, but knowing when to leave well enough alone with the sound design. One of the concepts of the film is that when the spirit shows up, you must not scream - if you do, you're dead. Just before an appearance, typically all sound around the possible victim drops away, so traffic sounds fall to the wayside, a kettle whistle goes silent, etc. A sudden vacuum of sound can be a powerful tool when looking to put an audience on edge, but the filmmakers just can't seem to live without that rising tone of urgency in their score to indicate that "something's about to happen". It's unnecessary and typically ruins what were several moments that were quite spooky. Frustrating, but still a reasonably enjoyable film. 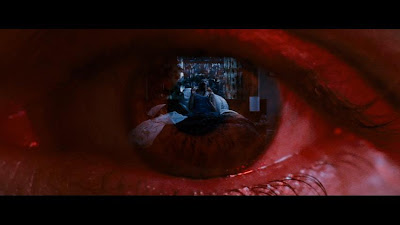 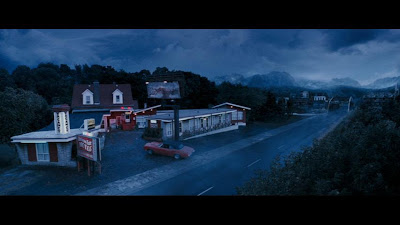 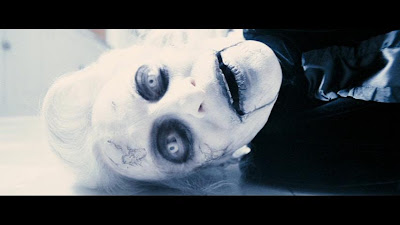 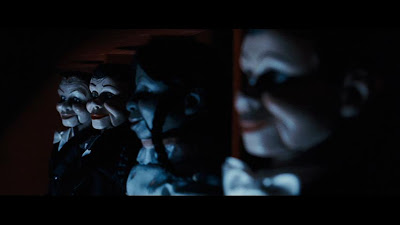 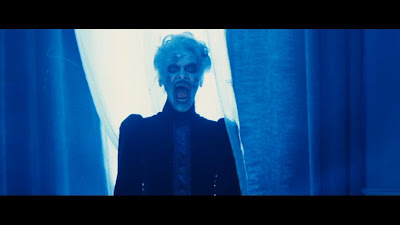 I'm going to add Splice to my Netflix queue; however, it's normally been my experience that horror films with more well-recognized actors tend to fare poorly.

Oh I agree Jamie...I've occasionally seen a title that looks vaguely interesting and then noticed that either a big star was in it or - even worse - a B lister, but with a famous face. It's not that their films tend to be less gory or bloody (which they definitely are for the most part), but because they typically follow formula.

The formula that Splice follows is from the old school exploitation films and Natali, Brody and Polley are on board. If it fares poorly for you, it won't likely be because of the typical reasons.