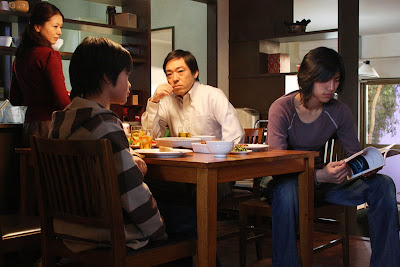 At the outset of his latest film, Kiyoshi Kurosawa warned the audience that it was NOT a horror picture. True, it isn't. Its basic themes deal with hypocrisy, loneliness, Japan's patriarchal society and the consequences of borders. So it's not Horror. But it certainly is horrifying at times. And if by the end Kurosawa's reach stretches a bit too far, it doesn't at all negate the rest of the film's grasp.

Salary man Ryuhei Sasaki loses his job as Director of Administration for a large firm. The company has decided to outsource a great deal of its work to China since they can get three people working for the price of one in Japan. The shame is overpowering for Ryuhei and he decides not to tell his wife while he searches for another position - how could he face her as overall head of the family when he no longer feels he is the provider and protector? But his family (along with his wife, he has two sons) has already started shutting each other out. They don't so much talk to each other as AT each other. Ryuhei's insistence on attempting to regain some form of control further distances himself from his sons and his wife. He tries to stop the eldest son from joining the U.S. Army and forbids his youngest from studying piano. He gives no reasons - he just needs to have the control. As he states to his wife, he feels that once he has said 'No' he cannot change his mind otherwise he will lose his authority over his children. His position within society has been taken from him, so he desperately needs to retain his traditional role in the family. But there seems to be an abundance of hypocrisy - youngest son Kenji is chided by both teacher and father for doing things that they themselves do. And it's behaviour that appears to be commonplace.

Kurosawa sets up most of his interior shots to have layers of different frames - windows, arches, shelves and just about anything else that can divide and seperate his characters from each other. It's incredibly effective in depicting a family that has shut themselves off. In addition, the occasional dropping out of all sound helps us to focus on a single person's feelings - yet another way of having a character be isolated from what is around them. Of course, that's not the only way Kurosawa uses sound. Low ominous rumbles, blowing winds and echoing trains signal the continued slide of the family's fate.

As each member of the family begins to get more desperate for not only a way out but a way to start over, the tone of the film seems to lose its way a bit. First, it attempts to mirror some of the issues within this family and within the societal structure of Japan with the U.S. involvement in Iraq. It's not that you can't make that case, but it feels a bit forced within the context of the film. As well, the late appearance of another character, a thief played by Koji Yakusho, brings some strangely comedic scenes into the story - not only due to the thief's bumbling attempts but also because of Yakusho's broad and almost over-the-top performance. Kurosawa mentioned in the Q&A after the film, that once Yakusho's schedule found a few days availability, he began increasing the role of the thief. And it too feels a bit forced.

Overall however, there's some beautifully realized moments in "Tokyo Sonata". The film makes a strong case for rejecting societal roles that box people into specific behaviours. Perhaps there may even be some hope lingering outside those limiting conventions. 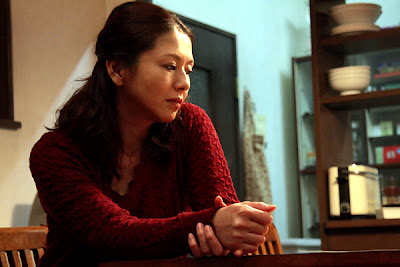