What? I'm not the first person to use that lame pun? Oh well...

Joseph B at itsamadmadblog2 was kind enough to tag me in the latest instance of a 12 movies meme that's all the rage with the kids these days. The Dancing Image came up with this latest version (apparently inspired by a post at Lazy Eye Theatre - seriously Piper, ya gotta be more careful with throwing out ideas like that...it's downright dangerous!) which asks for your top 12 movies that you want to see, nay MUST see, but cannot due to their unavailability (defined here to mean not available on either NetFlix or Canada's own zip.ca).

Unfortunately, I don't keep really solid notes within my list of films I want to see. The list of 1500 or so is completely without context, descriptions or any information whatsoever about whether the titles have been released on DVD. So I kinda randomly selected 12 that rang a bell in my head and then verified they weren't readily accessible (ie. did really quick non-exhaustive searches on NetFlix and zip.ca). So here is my list as of this moment in a totally random order: 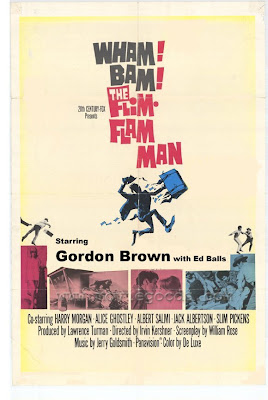 The Flim-Flam Man (1967)
A young man learns the con game from an old hand at the game (played by George C. Scott). Sounds good by me. Directed by Irwin Kershner. 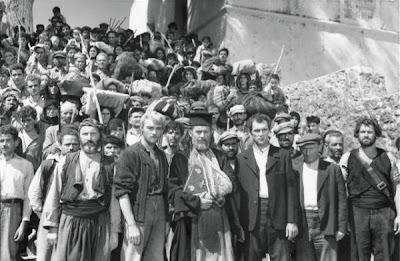 Celui Qui Doit Mourir (He Who Must Die) (1957)
Jules Dassin's follow up to "Rififi". That's pretty much all you need to know, but the story sounds intriguing as well - a village in Greece decides to put on a Passion Play and slowly the people chosen for the roles begin to live similar roles in real life. 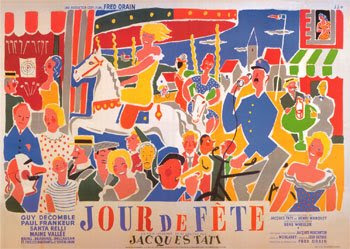 Jour De Fete (1949)
Jacques Tati didn't make a lot of films - so there's no reason they shouldn't ALL be made available. This sounds like a great one. Now that "Trafic" has been released, I have to believe Criterion is moments away from getting this one done. 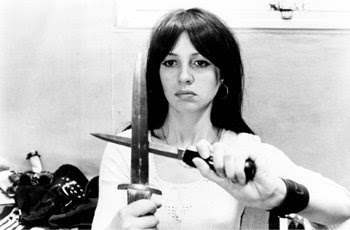 Out 1 (1971)
Jacques Rivette's half-day long work (I'm talking 24 hour clock here) gets the occasional Cinematheque showing, but I think I would need to watch it on my own schedule. The little I know about it sounds like it has some brillant moments. 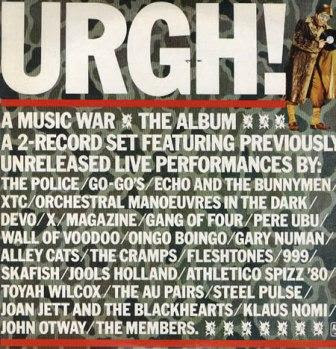 Urgh! A Music War (1981)
Live 80's music on display! Bands like Wall Of Voodoo, The Go-Go's, Gary Numan (in the coolest little egg shaped car), XTC, Devo, Gang Of Four and X are all captured right around their prime period. Likely to be oh-so-completely dated, it would be so much fun to see again. Yeah, this one's a cheat as I saw it back in the day in the theatre, but I'd love to see it again. I can't I imagine I will though - this must be in music rights hell. 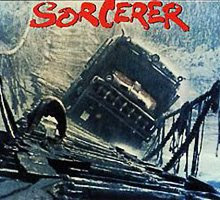 Sorcerer (1977)
William Friedkin's take on Henri-Georges Clouzot's Wages of Fear is only available in Pan-and-Scan so it isn't really available. I've heard terrible about it, but I've also heard phenomenal. Would love to judge for myself. 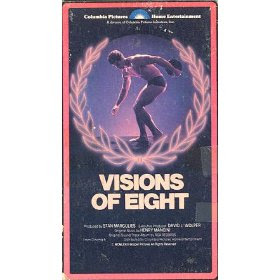 Visions of Eight (1973)
An omnibus film and a sports documentary, eight directors (Claude Lelouch, John Schlesinger, Milos Forman, Kon Ichikawa, Arthur Penn, etc.) follow different stories at the 72 Munich games. The titles of the segments are: The Decathlon, The Fastest, The Losers, The Beginning, The Highest, The Women, The Longest, The Strongest. Sounds like an interesting approach and we rarely (short of perhaps Olga Korbut) think of the athletic portion of the 72 Games... 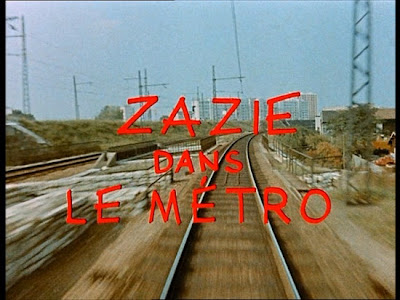 Zazie Dans Le Metro (1960)
I've been on a mini Louis Malle kick of late. I missed this last year when a local French film festival showed a print on the big screen and I'm still kicking myself. 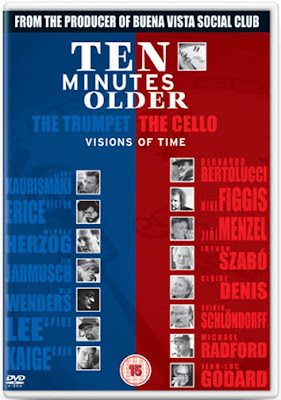 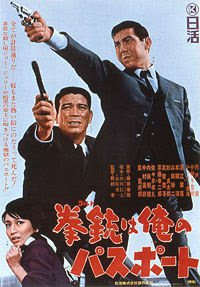 A Colt Is My Passport (1967)
A place holder for any of the Nikkatsu Action Cinema films that were touring around as "No Borders, No Limits". I've only seen a few of these films and they are almost always a ton of fun. The set of prints never made it to Toronto, but at least I have the book. 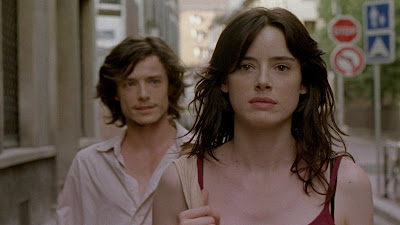 Dans La Ville De Sylvia (2007)
A top rated film at TIFF 2007, I'm dying to see it after this remarkable post by David Bordwell. How come it isn't available on DVD yet, but this piece of awfulness (shown at the same fest) is? 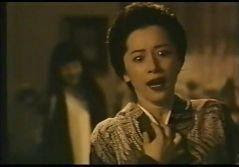 Don't Look Up (1996)
An early J-Horror film from the director of "Ringu". It's probably nowhere near as good, but I'm a fan of the genre and I've heard it does have moments of major creepiness. I believe it's currently being remade by Chinese director Fruit Chan, so that may open the does for a re-release on DVD. 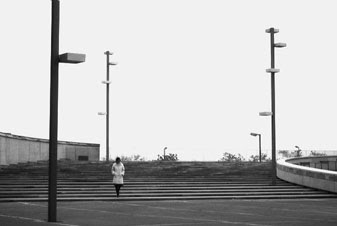 Notes On Film 02 (2005)
"Antonioni's detachment meets Final Cut Pro meets Fibonacci". That sentence alone from the Cinematheque Ontario description of the film had me curious. Unfortunately I couldn't make the free screening and I can't imagine having another chance to see a 96 minute experimental black and white Austrian film by a guy called Norbert Pfaffenbichler. I can't be the only one who wants this on DVD, can I?


Feel free to ignore or change the meme to suit your own ideas.
Posted by Bob Turnbull at 09:30

I can help you with Dans le ville de Sylvia as well. Remind me the next time we're getting together.

I think I just drooled a bit over my keyboard...Thank you for the offers my good man.

That must be a screener for Sylvia from last year's TIFF I assume? I'd definitely appreciate seeing it...I'm sure I'll still buy it if it comes out in R1 as it seems to be a film you can savour over and over.

I'll lend you "Seagull's Laughter" while we're at it. I think I promised that to you awhile ago...

Great stuff, Bob. I've seen Malle's film- I think it was on regular rotation on Sundance or IFC back in the day. And you're right to skip "Sorcerer". I tried watching it, but the pan and scan and cut-up look is awfully distracting.

All very interesting picks, Bob. Speaking of Louis Malle, have you seen "The Fire Within" by him yet? Phoenomenal film.

From your list I've only seen The Flim-Flam Man, Urgh! A Music War and Zazie Dans Le Metro. The Flim-Flam man is a sweet movie and I like it a lot, Zazie Dans Le Metro played on TCM earlier this year and I really enjoyed it. I can't understand why it's not available. And last but not least, I know I've got a copy of Urgh! A Music War too on video somewhere. If you don't get a a chance to see it let me know and I can hunt around for it.

I really want to see A Colt Is My Passport too and it just might be getting a Criterion release so keep an eye out for it! I know that Criterion is supposed to announce that they're releasing some old Japanese crime films soon that played during the Nikkatsu Action Festival so we can expect to see some good stuff in the future.

Thanks Joseph. Yeah, I can't watch anything in P&S these days. I don't know how I did it as a kid watching so many of those movies on ABC/NBC/CBS which were chopped to pieces.

Marc, no I haven't seen "The Fire Within" yet, but it's tops on my list for my next rental batch. I ended up really liking "The Lovers" as I keep flashing back to it.

Thanks for the offer Kimberly...I'll let you know if I need to take you up on that. I thought I had heard about Criterion releasing some of those Nikkatsu films - oh man, that would be great. An Eclipse set (or a couple of sets) would be perfect - as long as the transfers look good enough.

I snagged a copy of Jour de Fete when I was in Amsterdam. What is worth noting is that the DVD is in color while the theatrical release was in black and white. Zazie amazed me so much that I made a point of seeing it twice theatrically. I saw Sorcerer on the biggest theater screen in Denver but haven't seen it since its release. Good luck on seeing the films on your list. You might want to consider either getting a DVD player that can play all DVDs, or do like I did, which was hack the code.

Thanks for the comment Peter. You've now got me desperate to see Zazie.

Yeah, I've been meaning to go region free for awhile, but I guess I always end up sticking with R1 because there's still so much to see that's available. However, the more I start digging, the more I find jewels that I can only see from other regions. The one that has me ready to switch is "Survive Style 5+" - I've seen it, but it was just WAY too much fun to never see again (and with music rights issues, it may be tough to see in R1). I'm not sure exactly which region-free player to buy and I can't find any 'hacks' for my current DVD players. I think I just have to bite the bullet and go to, gulp, WalMart and buy a cheap $40 player there (which typically are region free I believe).