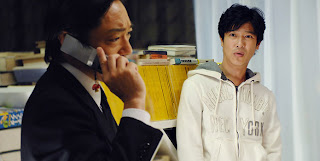 The last weekend of TIFF is always a bit of a letdown it seems - no more premieres, no more Q&As and less and less buzz in the air - but despite a few clunkers, my last 2 days hit some huge highlights. 4 of my top 10 films of the festival happened over these last 2 days (5 if you include Friday night's), so as much as I wish TIFF would spread their premieres out a bit more to keep the energy of the fest going, I sure can't complain about a lack of quality fare. Key Of Life, for example, was simply pure enjoyment from start to end. This entry from Japan's Kenji Uchida takes the well-worn idea of people switching identities and crafts a continually surprising story about doing things for the right reasons. Its finely tuned characters always manage to stay true to themselves and I can't think of a single misstep the movie made. It starts with a suicidal failed actor who, after accidentally knocking out a man in a bathhouse, takes on his identity after realizing his victim has lost his memory. What he doesn't realize is that the man was a hired killer. For his part, the killer thinks that now he is the actor (due to leftover clothes and identification left in his hospital room) and, because of his natural diligence, starts trying to perfect his acting craft. It's best not to delve any further into the plot, but each additional detail builds upon previous ones and helps to create many funny moments and unexpected pleasures. It's rare to see such care put into building this kind of depth of character, so it was a joy to come across it. One of the best of the festival. 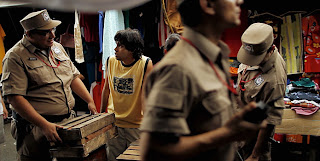 Early in 7 Boxes I realized that what I was watching was not only of a high caliber, but was also likely to bring its disparate threads and characters together in the end. Isn't that a great feeling? When you just somehow know that the film you're watching is in capable hands and that they will steer it in the direction it needs to go? It's not long after our hero Victor (a teenage wheelbarrow operator) begins his quest through the streets of Asuncion Paraguay for a cell phone that you get sucked into his world. Those busy, noisy streets play a central role in his search and before you know it, that selfish desire for a phone becomes something different with much higher stakes for a number of people. Without wasting much time, the film injects new people into the story as Victor attempts to deliver 7 mystery boxes for payment. One by one these new characters get tied back into the continuously moving plot and it's a wonder that with these intersecting stories nary a character or moment gets left hanging. A rival operator starts complicating matters for Victor, but when the cops and local gangsters get involved it leads to exciting chases through the streets and several standoffs. A truly fun ride. 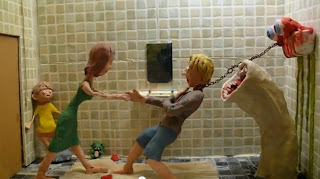 Sad to say, the back half of the day contained fewer pleasures. That's not to say that it was without any, because The ABCs Of Death certainly provided a couple - specifically, an Apocalypses, a Dogfight, a Fart, a Klutz, Nuptials, a Toilet and, most enjoyable of all, a Quack. Those seven were the standout stories out of the 26 alphabetically ordered short films on display in this most recent anthology collection. Each of the stories has a different director who has been assigned one of the letters and two conditions: 1) keep the budget under $10000 and 2) base a death scene around a word starting with your given letter. As you might expect, there's a wide variety of approaches (animation, claymation, humour, nightmarish, farcical, depraved, etc.), but not as much true creativity. Adam Weingard's "Q Is For Quack" is the most clever of the bunch (and funniest) and Marcel Sarmiento's "D Is For Dogfight" is probably the best looking, but there's a large number of misfires. They only run a few minutes each, but when you're running at about a 25% success ratio, there's a lot of frustration to be found amongst the Libidos, Miscarriages and Orgasms. The biggest problem with the majority of the shorts is simply an odd lack of focus within the 4-5 minute run times and, even odder, a lack of brevity. Many of the ideas brought forth could have been wrapped up in a solid 1-2 minutes per film - stretching each to at least twice their necessary lengths drained them of their energy and surprises. A missed opportunity. 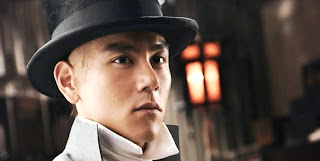 Speaking of blown potential, Stephen Fung's Tai Chi 0 - a mix of goofy and epic - spent most of its running time flipping in equal measures between fun, frustrating, clever and dull. As it turns out, this was the first part of the story of the founder of the Yang school of tai chi (the next part called Tai Chi Hero is due out in China before end of this year), so there's a great deal of setup, back story and long explanatory sections that are frankly not that interesting. Mostly because the central character isn't overly interesting either. In order to keep the audience alert, cartoonish moments are tossed in during character introductions (a technique that could have added a lot to the film, but falls flat most of the time it's used here) and several fight sequences. This was the second film I brought my 12 year-old to and he was quite painfully bored. He perked up during the fights, but even most of those led nowhere. While Yang is holed up in a small mountain village hoping to learn the secrets to their martial arts, Western technology is threatening to tear down the village. I expect all this will come to a head in part two, but someone else will have to tell me how it ends since I'd rather just go watch a Shaw Brothers film instead. There's something to be said for throwing the kitchen sink on screen, but make sure you turn the taps off before ripping out the plumbing...