Day 5 of the Toronto International Film Festival was a thin one - only two films and neither did a thing for me. Well, unless you include being baffled, pummeled and manipulated.

Fortunately, the Monday evening of TIFF was also the yearly mid-festival film blogger/writer/critic meet-up and that helped soothe the wounds of the day. With several folks joining from out of country this year, it made for a great evening of discussion and friendly argument about TIFF films and film in general.

The rest of the day though... 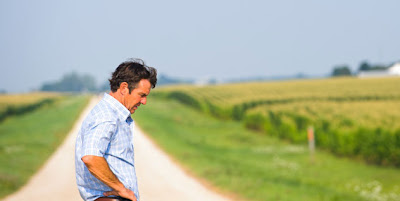 Ramin Bahrani's latest At Any Price is a major misstep. Despite a story that has excellent points to make about the pressures today's farmers face and a look at our overall societal push to never be satisfied, the film is, to be blunt, shockingly bad. The root of it all is the script - Bahrani opened our screening by stating that he and his fellow screenwriter spent 6 months with real midwest farmers, but it's hard to believe given the clunky, unsubtle and unnatural sounding dialogue. It goes from cliche to cliche and spells out every single message at every single opportunity. It's possible that Dennis Quaid was directed to act in that manner by Bahrani, but it's such a mannered, unsubtle representation of a "salesman" who is always on, that it completely misses the mark and uncomfortably exists in the same world as everyone else. Well, except Heather Graham - her aging cheerleader mistress role (see, I told you it was cliche) was not so much a character as it was a blunt force instrument to push forward further messages. She's given little to work with and does even less with it. Zac Efron likely had the best performance, but the entire cast is given some terrible dialogue to go along with the many plot machinations. I like where the film ended (which fits the theme), but I hated how they got there. I remain baffled... 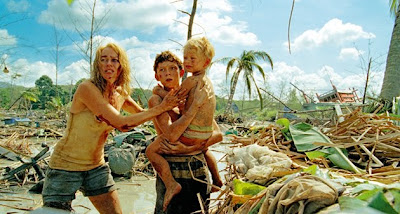 Give Juan Antonio Bayona credit - he can shoot the hell out of raging torrents of water. What he has trouble doing as main helmer of The Impossible - a true story of one family's ordeal through the massive tsunami that hit Thailand in 2004 - is letting the audience find their own way to their emotions. He essentially insists on dictating everything you will feel throughout the film using a heavy-handed soundtrack and story elements designed to pound the despair down your throat. It's rather unrelentingly grim as the family of five is split apart when the waves crash ashore at their resort. After the typical early happy moments of family bliss (the character development is fine, if pretty standard), Mom (Naomi Watts) and the eldest son are wooshed away while Dad (Ewan McGregor) somehow manages to corral the two youngest and stay near the resort. Admittedly, the long sequence of mother and son struggling through the wreckage strewn water is intense, but it's all emotional manipulation after that - even to the point where family members just miss each other walking down hallways in a hospital to increase the tension as to whether they will reunite. Any story of survival from that horrible disaster is incredible enough, so why make it incredulous by adding that additional level "oh no, they just missed each other!"? As well, the film almost exclusively focuses on this particular family of five - I suppose it's understandable from a storytelling point of view, but there's very little mention of the locals. They typically appear as kindhearted "helpers" to the tourists or appear as background. I'm not even sure why I chose the film at this point - your time would be far better spent watching this documentary (part 1 of 7) that provides real stories and context for the crushing number of people killed across 14 countries. This movie just isn't necessary.