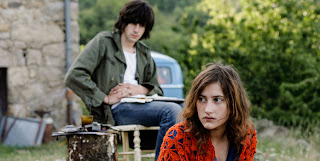 While I started day 4 of TIFF watching Olivier Assayas' Something In The Air, I couldn't help but feel that the filmmaking was somewhat effortless. It's a feeling I've had before with his work (particularly Summer Hours), but it makes even more sense with his latest since it's put together via numerous autobiographical moments. The film starts by focusing on Gilles and his involvement in student protests with his comrades in early 70s France. They don't come across as overly sympathetic, but the characters are interesting because they are conflicted and searching for their convictions. Gilles even states that he lives within his own fantasies and never answers when reality knocks. The film is very much about making your own choices and understanding their consequences - something it seems Gilles slowly begins to figure out as he tries to balance his political ideas with his art and falls into a relationship with another protestor (played by the wonderful Lola Creton who has quickly become one of my favourite actresses). It's very rich with ideas and passion. 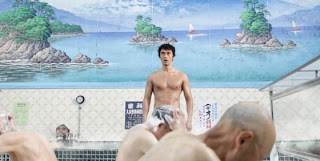 The most straightforward crowd pleaser I've seen so far has been the Japanese box office champ Thermae Romae. It has Romans, time travel and bathhouses - what more could you want? In ancient Rome, the architect Lucius is in a rut with ideas for new bathhouses (or thermae as they are called) and just as his depression sinks to a new low, he gets swept into an underwater portal and pulled forward in time to a modern day bathhouse in Japan. Not realizing he has time-traveled, he is stunned that these "flat-faced slaves" have developed these incredible ideas and new technology. When he's back in Rome, he uses some of the new concepts to build the best thermae Rome has ever seen. By going forward and backward in time, he develops a reputation and becomes a trusted advisor and friend of the emperor. Each visit to Japan happens to plop him in front of a pretty aspiring manga artist named Mami and eventually her and a group of elderly men from the bathhouse also get brought back to Rome. They accidentally break the expected future - the evil second in command is now tapped to be the next emperor - so they have to help fix it. It's clever and charming without pushing the cuteness too far even if it does occasionally get a little too goofy at times. It also never bothers to explain why the time traveling is happening or how it's happening which is a good thing for a movie like this - explanations would have dragged it down. The film also put me on to one of the grandeur themes I'm seeing in the festival - that of community. 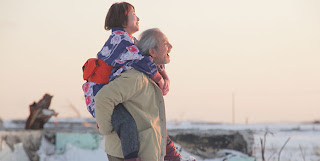 The least radical and most "normal" film Sion Sono has made so far is his latest Land Of Hope. It follows his entry from last year (Himizu) as another call to his countrymen to move forward and to seek out new lives after the disastrous earthquake and tsunami of 2011. More calmly paced then Himizu and far less intense, Sono focuses on several members of a family: an elderly couple, their son & his pregnant wife and the neighbour's son & his girlfriend. They all live right on the edge of the 20 mile radius that has been evacuated due to the nuclear power plant issues and while the neighbours are forcibly removed, the elderly couple is allowed to remain. While the parents decide to stay with their old home (where they literally have roots - from the trees each successive generation has planted there), the parents-to-be try to get some distance from the potential radiation. The son's wife in particular gets paranoid about protecting her unborn child and carries Geiger counters everywhere while wearing protective suits. The neighbour's son and his girlfriend are trying to get her back to her home which was closer to the impact zone of the tsunami. There's little hope any of her family is still alive, but there's a strong need to return home. Sono speaks directly to those affected: find a new home if you have to, but keep living and take things one step at a time. He also creates a much more affecting view of real love and devotion via the elderly couple (he is the caretaker for his wife) than anything in Haneke's Amour. 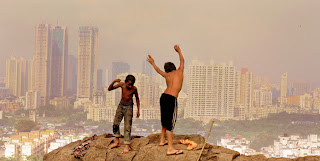 Working in the same vein as the neo-realists of old and the independent "pick up a camera and start shooting" spirit of the last decade, Manjeet Singh's feature debut Mumbai's King follows a young boy named Rahul through several days living on the streets of Mumbai. Though his home is with his mother, father and little brother, most of his time is spent wandering the slums, scrounging or stealing food, playing with his friends and tracking the movements of a girl he likes. He keeps himself scarce due to his father's drinking and tendency to lash out with violence towards both him and his mother. He tries to defend himself and his Mom, but his hulking Dad is no match for him, so his friends suggest they all gang up on his father and give him a beating he won't soon forget. The majority of the film is mostly improvised with non-professional actors in the streets during the festival of Ganesh and it shows a spectrum of detail of the city - both the gorgeous colour and humanity with the slums, but also the desperation and filth. There's garbage everywhere, but the festival brings music and dancing to all parts of the city. Rahul's best friend is a small boy named Arbaaz who sells balloons and has the sunniest personality you could ever come across. What we see is pretty much the actual lives of these kids (Rahul and Arbaaz are their real names) and it leaves you feeling a range of emotions. Arbaaz continually tries to boost Rahul's spirits and tries to help him with his "girlfriend" (the music that plays with every encounter with the girl is simply joyous). When he invites Rahul to his own house (Singh mentioned in the Q&A that this was actually Arbaaz's real home that they have to vacate during the monsoon season), we see his numerous siblings and the very little they have on which to subsist. And yet his mother still offers food and shelter to Rahul. There's despair all around, but Singh and his actors offer some hope too. A truly wonderful film. 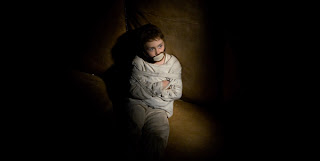 Speaking of despair, Spain's Painless layers it on thick. Not just within its story of a rare condition a group of children have (the inability to feel pain), but in its grander scope look at the horrific ways humans treat each other - particularly during the Spanish Civil War. The children are dumped into a prison to "protect" not only themselves, but others (since they don't understand that they can inflict pain on others). The story is set in the early days of the civil war (early 30s at its start), but also has a modern day component with a doctor recovering from a serious car crash delving into the secrets of his parents that tie back to those earlier events. It's a very dark and disturbing story - filled with desaturated scenes in the prison focusing on black and white contrasts - and first time director Juan Carlos Medina hits just about every metaphor spot on, but after a while it tends to drag the viewer into the muck as well. As the children grow older, a German scientist comes to the prison to study and experiment with them. His ultimate goal is to better understand pain and be able to bring his results back to the Reich, but he discovers that one of the boys is something beyond the other children. It's a horror story, but not necessarily a horror film - at least not the kind I was hoping for given the subject matter and some of the gorgeously shot scenes. I expected tension, shadows and creepiness, but I got deep and utter gloom and torment. That's not to say it makes for a bad film, but it certainly wasn't what I expected.