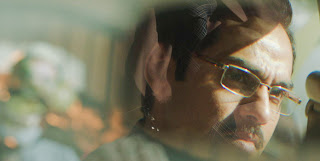 Though my first film of Day 3 was 10 films ago (I'm writing this at the end of Day 4), I have no trouble remembering it. Shanghai fully lived up to its pedigree (a remake of the political thriller book Z upon which Costa Gavras had based his own political thriller film) while also incorporating the issues of modern day India and all of its own political quirks. The filmmakers have a keen feel for delivering just enough information - but not too much - to keep you completely immersed in the storylines that intersect. Though the film is just shy of 2 hours, there was an intermission halfway through (a regular occurrence in Indian cinemas). In actuality, there wasn't supposed to be a real intermission while it played at TIFF - the Intermission title card was supposed to appear briefly and then segue right back into the movie. Alas, there was some miscommunication somewhere and the 2nd part of the movie had not been properly loaded to the projector's server. So we had an extended mid-film break of 45 minutes. It wasn't the foul-up that will make the screening an easy one to remember though - it was director Dibakar Banerjee's impromptu 30 minute Q&A while we waited for the fix. He led us through details of what a typical evening of cinema is like in India, his relationship to the book & its author and his reason for naming the film after a Chinese metropolis (simply, that Mumbai desperately wants to copy Shanghai's growth and become a modern city), all while being friendly, funny and taking the problems in stride. I was almost saddened when they fixed the film...However, all it took was a few minutes of the second half to pull me back into the swirling conspiracies. I had initially thought that I would have to skip the end to make my next screening, but I just couldn't leave the story. It had me in its hold. 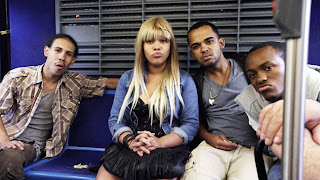 Of course, the film that followed (Michel Gondry's The We And The I) is a better candidate to see in North America at a later date, so it made more sense to miss its opening bits than the end of Banerjee's film (though here's hoping Shanghai gets exposure!). And while I did indeed miss the opening 20 minutes or so of Gondry's latest, I was easily able to slip right into its rhythms and pace as a city bus full of high-schoolers get driven home on their last day of class. Immediately I could see that it was not going to be a well-loved film by many since the non-professional actors struggle in their roles while their characters - probably not very far removed from themselves - are grating and annoying. But isn't that what being a teenager is about? What galvanized me was the energy Gondry brought to bear. The entirety of the middle section of the film called "Part 2: The Chaos" was fast-moving, cut between different perspectives, pulled stories together, focused on the kids complete & utter self-involved natures and did it all to a fantastic soundtrack (Young MC's "Bust A Move" is still one of the best dance-ditties of all time). Gondry solves the dilemma of being stuck on a bus by allowing us to see flashbacks to previous events as well as the occasional fantasy element from the kids' perspectives. This enables him to summon all his trademark magic - crafting several wonderfully surrealistic moments and using tricks like showing some of these external scenes in the windows of the bus. The characters end up showing (for the most part) a few more layers than initially expected and stories either come to satisfying resolutions or find the perfect peak/valley at which to leave us as the kids gradually start leaving the bus. There's not a great deal of subtlety in their performances, but there's a very natural feeling to the cacophony of voices when arguments flare up. I can't say that I can relate to these kids, nor did I particularly like many of them, but I highly enjoyed my time on that bus with them. 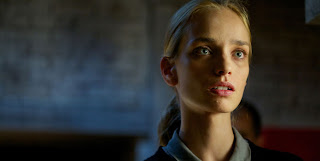 Some more surrealism followed with the Bulgarian The Color Of The Chameleon. In this case, it was less situational and more of an overall feel to the world that central character Batko lives in. He is found at an early age to have an ease with lying (a family trait as it turns out) and is recruited into the spy game. After getting fired without just cause, he looks for revenge by creating an entirely fictitious spy network from the members of Speculum: The Club For New Thinking (whose members include a "counter-intuitive feminist"). He pits the members against each other - telling one person to create short "orgasm friendly" films while another is to attempt to control the population's sexual release - and builds it to a point of being able to bring down parts of the government. It's all very dark and twisty and ingenious and quite unique. It can be a challenge to follow at times since it moves at its own odd pace and the humour switches from absurd to dry at the drop of a hat. But any film that contains lines like "probes the orifices of power with a speculum" and fits in dreamlike sequences based on Casablanca will definitely appeal to a certain subset of film fans - including me. 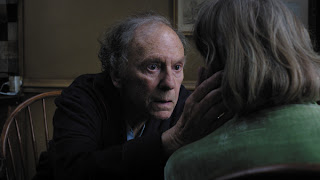 Michael Haneke's latest film Amour (winner of the Palme D'Or at Cannes) does exactly what he wants it to do to you. It punches you in the face. It does so in expert fashion with stunning performances from two legends of the French screen (Jean-Louis Trintignant and Emmanuelle Riva) and is crafted quite brilliantly within the confines of the elderly couple's apartment as Riva plays a woman slowly succumbing to the ravages of a debilitating disease. It's almost impossible not to think of one of your own family situations, a recently deceased relative or to suddenly put yourself right into the role of caretaker to a long-time companion. In other words, you'll be mulling over your own inescapable mortality. That may be what that crafty Haneke wants you to do, but short of appreciating the technical skill on display here, the movie isn't exactly entertaining. In fact, it's occasionally dull, sometimes squirm inducing and it rarely makes you think of anything more profound or interesting than "I'm going to die and so are all my loved ones". I didn't feel this harsh about the film after seeing it yesterday - I wasn't in love with it, but I was giving it a chance to settle - but a day later, I've lost most of what goodwill I may have had. A movie I have no plans to ever revisit. The little yellow pills that Mary keeps popping to flatten her emotions are just one of the many references to that colour in Nick Cassavetes' latest film. Appropriately titled Yellow, the film follows Mary through her daily struggles to figure out what normal is supposed to feel like since she admits that she feels nothing for other people or anything at all. She copes via pills and strange dreamlike hallucinations where she may suddenly find herself in a flooding classroom, a musical number or right in the middle of stage play. She gets fired from her temp teaching job and treks back to her family home to attempt to come to grips with what broke in her life. Some of these surreal moments are visually interesting, but given that Mary is completely unsympathetic, unrelatable and of little interest, the scenarios never really lead to much. It's really hard to care about a character who has reached a point where she doesn't care about anything herself. She may have a good excuse (her family history is quite screwed up), but it doesn't help matters when we find the reasons out later in the film. Even taken as a comedy (which is how Cassavetes described it), it doesn't really work. A few bits of dark humour combined with family members turning into farm animals at a dinner table doesn't make for a compelling movie. Nor a very funny one.