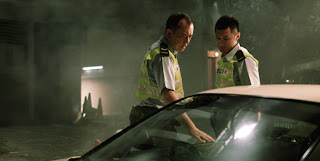 I had a good streak going before my Friday screening of Soi Cheang's Motorway: 10 solid to great movies in a row. And then it all came crashing down. I can't say that I wasn't warned since Cheang's previous film Accident (which I saw at TIFF 2009) promised great things and delivered very few, but I couldn't resist a film that was essentially built around car chases. Especially given that Cheang is a disciple of Johnnie To - not a director I'm overly fond of but certainly one who knows how to create some wonderful set pieces. Unfortunately, like with Accident, not only can Cheang NOT take advantage of the set pieces (the car chases are good, but not great), he adds NOTHING else beyond them. Honestly, nothing. Nothing without cliche anyway. Men yell, stamp their feet and over-dramatize everything, women (even ones in positions of authority) are marginalized and a young cop has a partner "this close" to retirement. Sigh. I'm done with Johnnie To and all his students for awhile. 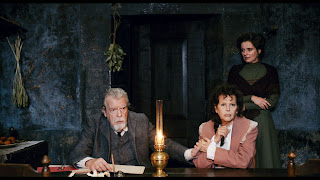 I was hoping that my next film Gebo And The Shadow - my first introduction to the 80-year career of Manoel de Oliveira (apart from one of the short segments of Chacun Son Cinema) - would get me back on track and show these flashy upstart kids how to really use the art form. With some lovely looking screenshots from the TIFF site, being just a shade over 90 minutes and with a cast that included Michael Lonsdale, Claudi Cardinale AND Jeanne Moreau, I thought it would be the perfect antidote. Unfortunately, it just gave me additional symptoms. Apart from a few charming moments by Jeanne Moreau, this was a drab, dull and repetitive filmed stage play. I'm not sure if those screenshots on the web site had been retouched or if we just saw a colour-drained version of the print, but the entire film had an ugly, bland look to it that wasn't helped at all by unimaginative framing within the static shots. The entire story takes place within the confines of a single room of a poor couple's house which they share with their daughter-in-law. Their son left years ago (initially it is a mystery as to why) and recently the father has felt a shadow following him. Could the son have returned? Will the mother stop whining? Will the daughter-in-law stop sniffling (I can't tell you how annoying the constant heavily mic-ed sniffling became)? Could I have cared less? The first screening where distinct sounds of snoring could be heard. Apparently, I need to start elsewhere with Oliveira. 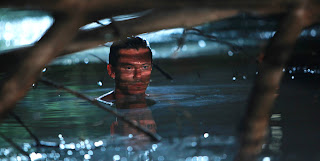 As I waited for my next movie, I had little confidence that my day would perk up. The scuttle-butt on No One Lives had not been good from its earlier-in-the-week Midnight Madness showing. I was still hoping that director Ryuhie Kitamura (I have a strong fondness for his gleefully goofy Versus) could inject some zest into this horror/thriller, but I wasn't laying any money down on it. Despite one or two surprises and good lines, my newly found low expectations were met as No One Lives proved to be uninspired and tension free. The cast were at best bland and at worst gratingly bad, but that may be likely due to the awful characters they were asked to play. I couldn't wait until the promise of the title of the film was fulfilled. Pointless. So let's move on... 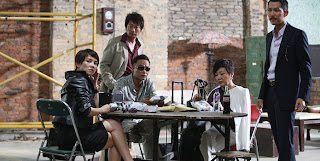 Well, thank goodness for The Thieves. It single-handedly saved the entire day. This extremely fun Korean/Hong Kong heist flick fully understands its genre, uses it wisely and yet still manages to surprise. It has its own share of cliches, but they are all used to serve the high entertainment quotient. And it was the perfect way to introduce my son to TIFF (when you get unsolicited praise from a 12 year-old, you know that you've done something right). Already one of the highest grossing Korean films ever made, you can see why audiences would be attracted to the cast and characters - all with their own little facets that move beyond just the standard one-note stereotypes. In addition to being an Ocean's Eleven style "let's bring the best team together" romp, it pits the Hong Kong elements of the team versus the Korean ones while also showing that each individual con-artist has their own angle and is happy to play against everybody else. The main heist is setup to seek revenge on an old partner-in-crime, but double crosses and unexpected issues start gumming up the works. And, in true Korean fashion, although the movie is breezy and fun for most of its running time, they shift gears and bring in some darker moments and ramp up the violence suddenly before returning to its lightness. This will undoubtedly get a wider worldwide release, so be on the lookout.