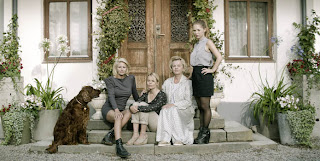 There are no truly explosive moments in Blondie, but you'd be forgiven for thinking that there might be one around any corner at any given time. There are countless slow burn conversations between the three adult sisters and their mother throughout the film and the tension level just boils on and on - occasionally spilling a bit over the edge or rattling the pot, but never blowing the lid off. All three of the siblings have returned home for their mother's birthday and old habits (along with new ones) rear their ugly heads as the girls try to deal with each other and their true feelings about their mother. It's all certainly by design since I felt that same unease throughout the entirety of director Jesper Ganslandt's previous film The Ape a few years ago. It's apparent that he loves living in that middle ground space - a sort of limbo between peaceful existence and all out war with others. I can't help but be kind of enthralled by it. 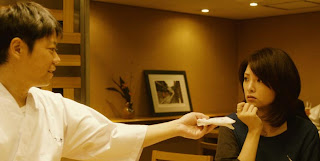 Propelled by a fantastic performance by Takako Matsu (I'll stack her stare up with the best of 'em), Dreams For Sale is subtle and surprising as it charts the con games a couple use against a variety of women to "borrow" large sums of cash. Meanwhile, their own relationship slowly disintegrates. Matsu's Satoko appears to be the stronger, clearer-thinking person of the two, so when Kanya admits he had a fling with a broken-hearted woman (and managed to secure a rather large loan of money from her), she sees an opportunity for them to get back on their feet after their restaurant burned to the ground. Kanya doesn't come across as the typical man on the prowl and in fact never really makes the first move on any of the women. What they see in him is a project that they can help fix and a sensitive person who might even listen to their own problems. Rich in character detail, the film never forces you to take sides. One of my favourites of the festival. 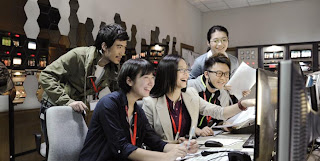 I was curious how director Chen Kaige - who tends more towards sweeping period epics - would handle a film whose central focus on cyber-bullying and the spreading effects of light-speed gossip could only be set in the 21st century. I was also a bit worried that the technology elements might take over the story in Caught In The Web and devolve into a mess, but this was a surprisingly fun look at the web of lies we can easily get caught in and how people typically just love to assume the worst of others. It all begins with an incident on a city bus that gets recorded on a cell phone by a young reporter. The video shows a beautiful well put together woman named Lanqiu being very rude to an older gentleman and refusing to give her seat to him. Everyone assumes that the woman is an uncaring spoiled rich bitch, but no one bothers to find out that she's also just received some horrible news from her doctor. At times you may feel that the characters could easily clear up all the stories flying around with a few simple statements, but given that Lanqiu continuously hears that truth isn't all it's cracked up to be ("sometimes truth is puzzling", "only the mentally ill tell the truth these days", etc.), you can understand her reluctance to come forward and explain. Things spiral from there as further assumptions are made about her relationship to her boss and as the story gets more and more popular on the Internet, other people's own relationships become affected. It occasionally tries too hard to tie in the Internet to our ability to quickly disseminate any kind of information quickly, but fortunately it usually gets back to its wider themes. 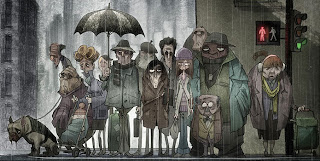 The Suicide Shop is a brightly animated and enjoyable mix of the delightfully sweet and the darkly humourous that somewhat bogs itself down with sub-par musical numbers and pointless 3-D. Director Patrice Leconte's first foray into feature-length animation does a great job creating an enormously likable central child - the only person in this world who looks at life as a constant set of opportunities to find joy - who is determined to change the viewpoints of his parents and two older siblings. The family actually owns a Suicide Shop which provides all manner of devices and methods for the depressed members of society to off themselves. Given the gloomy grey world of the city they all live within, it's no surprise that business is booming. There are many very clever set pieces and little touches, but the main pull to the film is little Alain's optimistic outlook. Whenever he's smiling amidst the rest of the grumps and sadsacks, you can't help but smile along with him. The musical sections strangely disengaged me a bit from the story, but I always got pulled back in when the tunes stopped. As for the 3-D, the only thing it brought to the film was its ability to steal away some of the brightness of the colours. Would have been much better without the musical and 3-D bobbles.
Posted by Bob Turnbull at 22:35