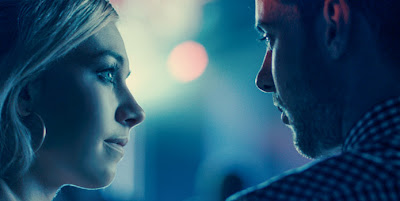 Even though one of the choices on my first real day of TIFF activity (3 screenings in all) was a big missed opportunity, the day was still very much a success. The other two easily made up for the first film by completely cashing in on every opportunity to meet the expectations of their genres. If they didn't necessarily break any new ground, they each embellished their solid stories with style. Oddly enough, all three films had beginnings that were weeks if not years later than when the vast majority of their stories occurred, so flashbacks were the order of the day. But I'm getting ahead of myself...Why don't I start at the beginning... 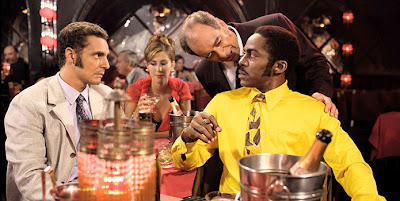 First up was "The Great Kilapy", an African made film focusing on one particular small time con artist during the late 60s and early 70s just before the end of Portuguese colonialism in Angola. The term "kilapy" actually means heist or con, and our "hero" is no stranger to either as he goes through the motions of being an engineering student in Portugal while preferring to party and chase girls. He indirectly supports the rising student efforts to push for Angolan independence (his native country) and is forced to return after helping a rebel friend escape the clutches of the police. While back in Angola, he finds himself in a treasury position (with his father's help) that enables him to siphon funds off for the revolution. In the mean time, he hops from bed to bed capturing and breaking numerous gorgeous female hearts. A great premise for what must be a fascinating story of the rise of the revolution to the successful independence in 1974. It's a real shame we never got it. Instead we spend most of our time with the chauvinistic Joaozinho who thinks nothing of cheating repeatedly on every single woman he pulls into his grasp. It may be a different time period and even a different culture, but the complete and utter lack of respect given to every single female character by Joao (and for that matter, the script) leaves you wondering why you should care a whit for this charmless man and why the entire film is told as a story from the hero-worshipping viewpoint of a modern day adult who met him back then as a teenager. Lazaro Ramos is very good in the role and obviously has oodles of charm at his disposal, but the character shows very little of it and truly makes you wonder why he seems to command any woman within his gaze. The revolution takes centre stage occasionally, but it feels like background noise for the most part since we spend so much time with Joao and his exploits. There's no build up or tension to the con he pulls at the treasury and the revolution suddenly just comes to a close. There was so much to work with here and so few results. 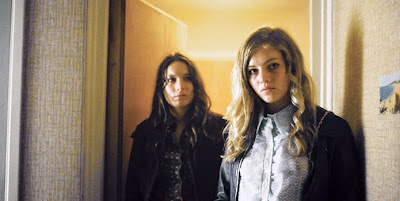 On the polar opposite side of the political thriller spectrum was "Call Girl", a terrific "based on true events" account of a prostitution scandal that almost toppled the Swedish government in the 1970s. The look and feel of the film is pure gorgeous, grainy 70s (as opposed to The Great Kilapy's use of flat drab colour to denote its period) and it seems to capture the spirit of the filmmaking world of the same era too - the paranoid-70s-espionage-thriller era that is. The film was immediately engaging due to its style which put you constantly on edge by favouring slow zooms on characters and a pulsing score. The story of young foster home girls getting pulled into a high end prostitution ring that served government and public officials was compelling enough, but the mechanism employed to do it can't receive too much praise. It dragged me along with a smile on my face as it jumped from the girls being lured into the life by the ring's evil Madam (perhaps a little too perfectly evil) to a police investigation that was opening cans of worms. Of further interest was how the film plays off the willingness of the country's leaders to exploit young women, while also providing major strides towards their equality. The Social Democrats had been in power for quite some time, so it wasn't an easy task to go after them. If the sound of corruption running high, tampered evidence and a principled cop against the system strikes you as familiar, consider that it is simply existing within the parameters of the genre - and doing so brilliantly. 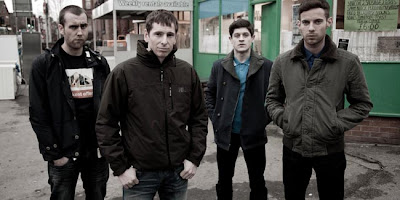 You could really say the same for Rowan Athale's debut film "Wasteland". It hits so many familiar beats, moments and characters that it will remind of you of a pile of other crime thrillers (particularly the "rooting for the small-time criminals to pull off the big job for all the right reasons" ones), but it will then take its place right alongside those films as a prime example of the genre. It displays all the elements that make them so appealing and in the end the movie does exactly what you want it to do. One of its strengths is the creation of its characters - again, nothing brand new, but it establishes them right away with distinctive and interesting characteristics. Even our hero Harvey's long suffering girlfriend is painted with shading and layers. We start the film with a beat-up looking Harvey in an interrogation room (facing Timothy Spall as the initially skeptical detective) and the back story gets filled in as we cut to "6 weeks earlier". Those early initial sections of the film also do an excellent job of giving a sense of place to the lads' hometown. In that respect, it has a more realistic almost kitchen-sink feeling early on, but starts to ramp up the stylistic touches as Harvey's friends get pulled into his plan (partially for revenge against the man who framed him and partially to bankroll a proper legal business opportunity) and the heist starts to take shape. Of course, any film of this nature wouldn't be worth its salt without a montage, and Wasteland doesn't disappoint in that area as it provides a fun and fast look at their preparations for the job. Nothing new, but still so very very appreciated.
Posted by Bob Turnbull at 00:46