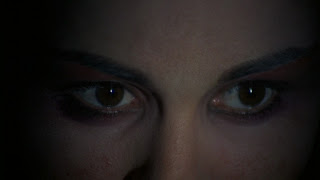 Almost halfway through the month and I'm still transfixed on all manner of freaky films.


Amityville II: The Possession (1982 - Damiano Damiani) - Though this sequel (or prequel depending on what you want to believe about the background of the stories) plays out its devil possession story little by little, it's quite amazing how it reaches a major crescendo around the 20 minute mark and then another at an hour before its final inevitable fiery showdown. In between these peaks, it plays out the haunted/cursed house tale mostly via sound, camera point of view shots and character reactions - and it's far more effective than you might expect. The dialogue and acting are average (though you have to love Burt Young for diving full tilt into the Dad-who-can-snap-at-a-moment's-notice character), but it builds the transformation of the eldest son a step at a time as the family moves into the house. Along with Mom, Dad and the devil-in-training, there are three others in the family - two youngsters (who keep getting blamed for things the house is doing - e.g. writing on walls, destroying furniture, etc.) and a teenage daughter who is distressingly close with the oldest boy. On top of that, Mom's just spitting distance away from serious religious fanaticism, so this family has been teetering on the edge before they even pulled up to the front door. And so the house is more than willing to give them that extra push...Even the priest who eventually gets sucked in to the family's woes may have his own secrets. There are intimations that he may like young girls or maybe that he's gay or that he's losing faith. The way this film plays out, he could well be all three. 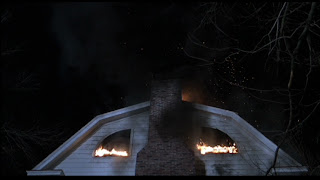 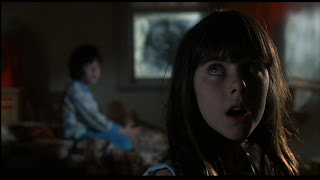 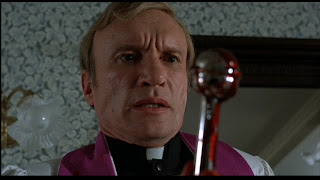 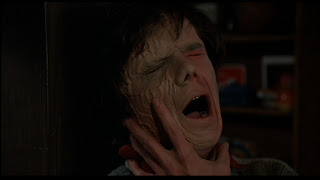 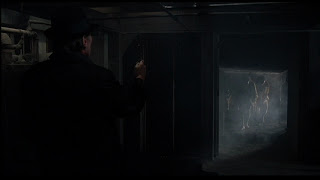 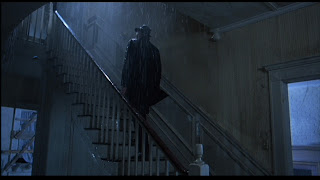 The Reflecting Skin (1990 - Philip Ridley) - The first of two films in this batch that approach horror from a child's point of view. If the themes aren't horrific initially, by the time they've been filtered through the eyes of the children they've certainly become horror. In this particular film, a young boy named Seth Dove is in the middle of growing up around the wheat fields of Idaho in the 1950s. With his brother off in the Pacific islands working on nuclear test ranges, his mother getting more angry and bitter by the day and his weak-willed father escaping into his vampire books, Seth has lots of time to create his own stories and ideas. As some of his friends begin disappearing, his father's past gets dug up and tragic consequences ensue - but Seth seems remarkably detached and focused on the single thought that the black-clad widow in a neighbouring house is an actual vampire and has stolen his friends. This is amplified when his brother Cameron comes home and falls in love with the widow. Young Seth sees them together as they disrobe, but is she sucking his blood or are they actually in an amorous clutch? Ridley doesn't focus on spooky, but still manages to create a disturbing environment - the loneliness is all around them, palpable and it's all that's in store for Seth. Cameron and the widow seem to be the only ones with a hope of finding some actual happiness, so is Seth really afraid of vampires, or is he afraid of being left alone yet again? Or maybe he just can't stand to see others be happy when he knows what his own lot is going to be. A truly odd movie - slow and occasionally uncomfortable, but filled to the brim with allusions to a child's worries. 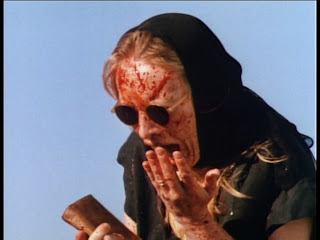 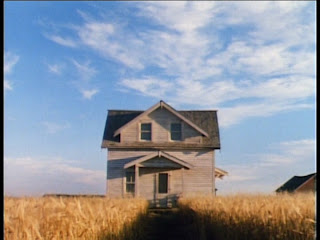 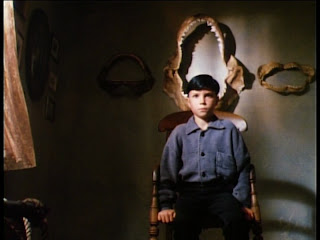 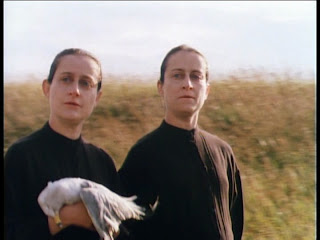 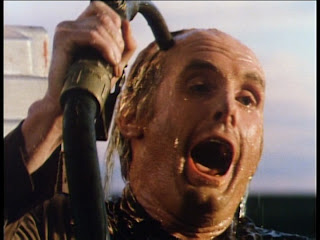 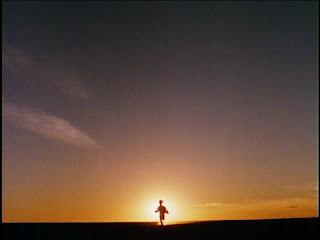 God Told Me To (1976 - Larry Cohen) - I think it's safe to say that this was the first Grindhouse, Horror, Sci-Fi, Blaxploitation, Crime Thriller, Melodrama I've seen this year. It's not without its problems of course, but apart from some of the dodgy acting (not a lot, but some) and obvious stolen shots on the street ("please don't look at the camera!"), the movie sill seems to work. It jumps into its plot pretty quickly as the opening shots of a bustling New York city devolve into panic once a sniper starts taking down pedestrians and cyclists. A brave detective clambers up to the sniper just in time to hear him say that he created the carnage simply because "God told me to". Several more incidents follow the first and each set of killings appears to have been a direct order straight from God to the ears of these previously ordinary, average citizens now turned murderers. And with each one our deeply religious hero detective gets more and more involved. In a foreshadowing of Kiyoshi Kurosawa's great film Cure twenty years later, the incidents seem to be preceded by the killers having all spoken to the same young, blond-haired man...The mystery deepens and gets stranger and stranger as the cop tracks down his own birth mother, the young man at the root of the killings and a drug-dealer turned cop killer while also dealing with his current girlfriend and his ex-wife. At times grungy, the film also gets a bit creepy and gory before taking odd turns into high-arching drama. Though you may be wondering what the hell is going on at times, Cohen almost always fills in the gaps in subtle ways - if you trust him, you'll suddenly realize that what you thought were plot holes or unexplained gaps have all been filled in. Less a horror film than one that simply has horror elements to it, it's no less an interesting ride and a real artifact of '70s filmmaking. 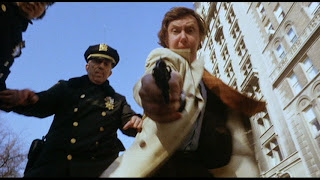 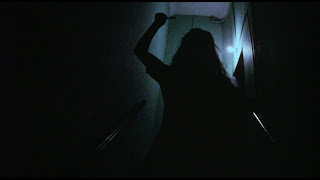 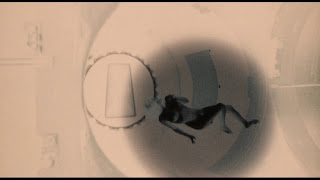 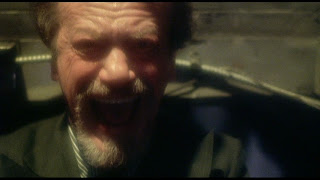 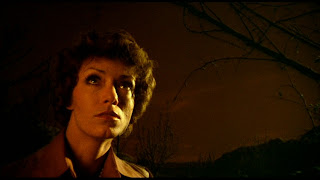 Lemora: A Child's Tale Of The Supernatural (1973 - Richard Blackburn) - Whereas The Reflecting Skin took its cues from a boy's view of the world, this particular tale brings us a 13 year-old girl's. The full title of the film is a key (and is much more accurate than the straight up horror title Lady Dracula that it is also known as) and gives us an impression of the temptations and changes that the very sheltered and religious Lila is faced with as she moves towards womanhood. Though not quite as gorgeous and creative as Valerie And Her Week Of Wonders was in depicting a teenage girl's whirlwind of life changes (or as scary and bloody as, say, Ginger Snaps), the film does bring a dreamlike, slightly off-kilter feel to the story as Lila leaves her hometown in search of her criminal father (who has recently murdered his wife and her lover). She has received a cryptic letter from a woman named Lemora asking her to come see her sick father, but on the way there her creepy bus trip ends with ghoulish creatures causing a crash followed by a battle between the ghouls and a group of cloaked dracula-like beings. She ends up at Lemora's house - initially kept in a cell and then welcomed inside. Lemora, though extremely pale and with dead eyes (possibly just a side-benefit of the terribly wooden acting), claims that after the next day's ceremony she will be able to see her diseased father. Lila is swept up in Lemora's promises, but when she catches her sucking the blood from a young boy, the jig appears to be up...The danger around her, the blood-like wine Lemora gets her to drink and the blue moonlit nights all serve as stand-ins for Lila's confusion over her changing body and the number of choices she now has as a growing young lady (Cheryl Smith, who was quite the B-movie queen, is very good as the young Lila). If the movie never completely dazzles you, it will likely linger for awhile. 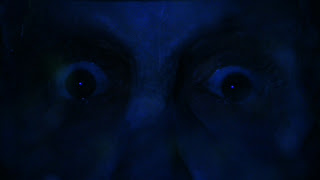 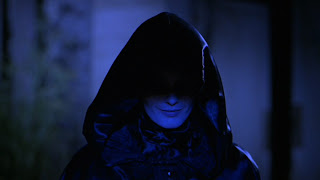 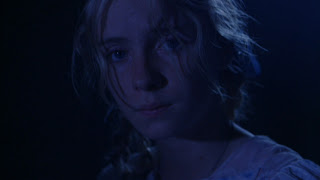 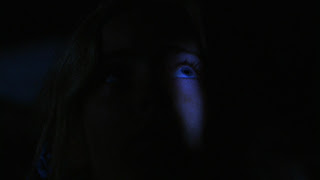 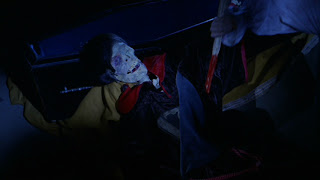 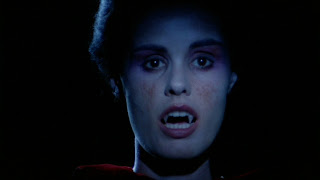