Toronto After Dark 2012 (the 7th edition of the festival) starts in just over 2 weeks and it's the biggest festival yet. I suppose I said the same thing last year (I just checked and indeed I did), but the festival keeps growing - not by leaps and bounds, but in small natural increments. 20 feature films (with Canadian shorts before each one) and a screening of International shorts will hit the screen at the Bloor Cinema (the fest returns to its home after being at the Toronto Underground last year during renovations). It'll be great to be back in the Bloor/Bathurst neighbourhood - there's a stronger Halloween vibe in that area during October and with Pauper's Pub right across the street, the Pub After Dark will be in full swing just about every night.

One thing I promised myself that I would do different this year is to completely avoid any and all trailers for the films showing at the fest. The trailers for After Dark films have typically been horrendous at setting expectations - typically selling the movie completely different than what it is and even sometimes selling it far too short. So if I'm going to the films anyway, why not go in unspoiled?

Here's a rundown of the full lineup (quotes in italics are taken from the After dark web site - the rest of each blurb is my thoughts about what to expect). Trailers for each film can be found at the Toronto After Dark site. 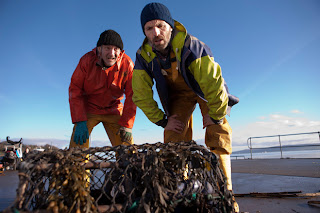 Grabbers (Jon Wright) - "in the mould of TREMORS, when a small Irish town is invaded by bloodsucking tentacled aliens, the locals discover that getting drunk may be their only way to survive". As the opening night salvo (and with a brand new liquor license established at the Bloor), I'm going to simply assume that this is going to be heaps of fun. 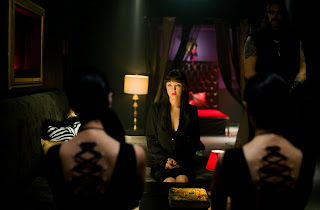 American Mary (Jen and Sylva Soska - aka The Twisted Twins) - "a disillusioned medical student decides to ply her trade in the shady underworld of unregulated surgeries and body modification with horrifying consequences.". Katherine Isabelle, best known for being the lead in Ginger Snaps, is the big reason to see this as I've been hoping to see her get wider exposure. Is this the right vehicle to do that? Hard to say given the controversial reputation of the Soskas, but all reports are that Isabelle is excellent. 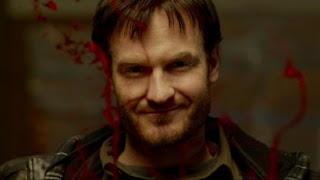 Crave (Charles de Lauzirika) - "a mentally unstable crime scene photographer spiraling into darkness, madness and violent vigilantism on the gritty streets of Detroit.". The promo points to both Taxi Driver and Fight Club as antecedents from a style perspective - certainly good lineage, but the jury will remain out as to how much of that is true and how much is complete salesmanship. There's some talent associated with this, though, so I'm leaning closer to the former. 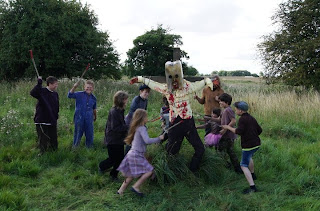 Inbred (Alex Chandon) - "this over-the-top gory British horror film finds a group of inner-city kids and their counsellors on a field trip fall prey to a rural village’s inbreds and their uniquely violent form of hospitality.". The write-up on the After Dark site also contains the teaser "Not for the weak of stomach!", so I guess gore-hounds will be happy. It doesn't sound like my cup of tea (and enough with the inbred concepts too...ugh), but it stars Jo Hartley so I'm curious how they handle a more mature woman in the lead which is unfortunately a rare sight in the horror domain (hell, in ANY domain). 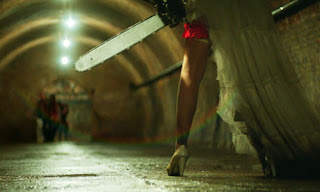 REC 3: Genesis (Paco Plaza) - "the latest instalment of the hit Spanish zombie movie series relocates the action to a lavish wedding where the guests - including the bride wielding a chainsaw - try to survive a terrifying outbreak of the undead!". I loved the original Spanish REC - tense, claustrophobic and never dull, you felt like you had shed a couple of pounds by the time it was over. It's sequel REC 2 fell back upon very standard horror movie tropes and was one long annoying HIGH DECIBEL EXPERIENCE! I truly don't know where this one will land since only one of the two original directors is back for this - so we'll have to see which previous film he leans towards. 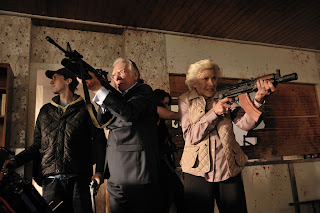 Cockneys vs Zombies (Matthia Hoene) - "a bunch of East End bank robbers find themselves caught in the middle an outbreak of the undead on the streets of London, it’s every gangster for himself.". The Saturday of the festival always has a double feature of zombie films to coincide with the city's Zombie Walk - a great idea, but it really requires a good slate of zombie films from which to choose. Whether I end up digging REC 3 or not, I'm sure it's safe to say it'll satiate the brain-hungry hordes who show up. Hard to say about the latter half of the 1-2 zombie punch - could go either way. 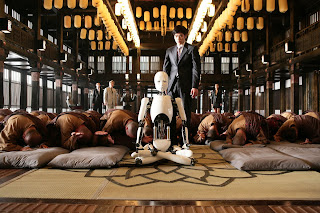 Doomsday Book (Jee-woon Kim, Pil-Sung Yim) - "this trio of apocalyptic tales features the rise of sentient robots, a zombie virus outbreak and an asteroid on a fatal collision course with earth.". A Korean anthology film starring Doona-Bae that also won the Fantasia jury prize? This just became my most anticipated without even needing to know a single other thing about it. 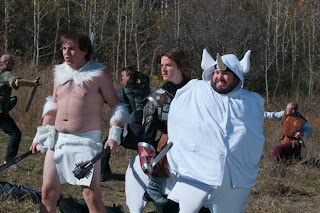 Lloyd The Conqueror (Michael Peterson) - "a fantasy comedy about three male college students who are roped into battle with Derek the Unholy, a dark wizard who is determined to hold onto his title as champion of the Larpers". This Canadian entry has potential as long as it doesn't think it needs to hit a broad audience. 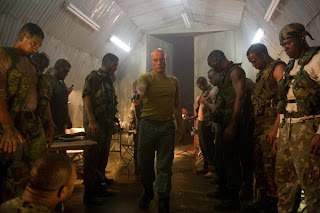 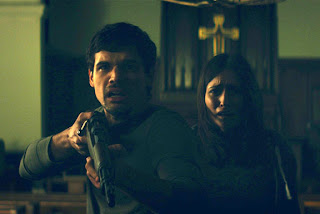 After (Ryan Smith) - "two bus crash survivors awake to find themselves the only people left in a deserted small town. Even worse, they only have a limited number of days left to solve the mystery of their predicament". There's more to the plot description in the promo on the site, but why give away additional details? Sounds pretty good already... 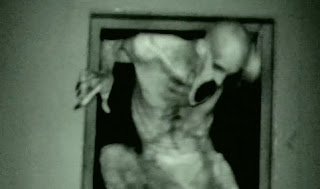 Grave Encounters 2 (John Poliquin) - "a young documentary filmmaker obsessed with finding out what really took place at the institute (from the first film) persuades a group of his friends to help him break into the building at night and record whatever they find.". The original Grave Encounters was apparently a "found footage" style horror which I know is a bad sign for most people these days. I tend to have a higher tolerance factor for those films, though, as long as they show some creativity. Not knowing anything about the first, I'll give this one the benefit of the doubt. Be creative though! 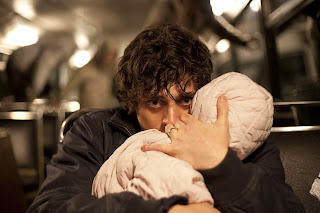 Citadel (Ciaran Foy) - "Following an unprovoked attack by a mysterious group of hooded thugs, a young father finds himself paralyzed by fear and unable to leave his home. To compound his nightmare, the local priest warns him that the hoodies will be back one day to claim the child.". Winner of the Midnighters Audience Award at SXSW, I'm hoping this leans towards an atmospheric-tension style. 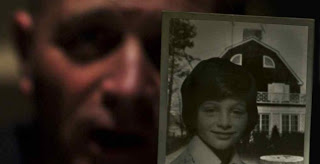 My Amityville Horror (Eric Walter) - "40 years after the most infamous alleged haunting in American history, Daniel Lutz who was just a young boy at the time, finally breaks his silence and tells his side of the story". Hoo boy...I count myself as a fan of the original film Amityville Horror (dated though it is), but I'm deeply worried as to how this "documentary" will approach the subject of the "true" story. It sounds like it should be a portrait of the now grown young son of the couple who owned the original house and whose story spawned the bestselling book and many films. It could be a very interesting and compassionate look at what Daniel Lutz's life was like growing up under scrutiny or it could be a whole mess of hooey attempting to bring new "facts" to life. Concerned, but curious. 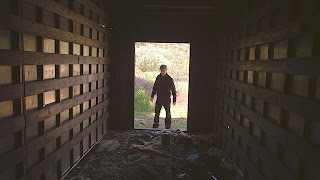 Resolution (Justin Benson, Aaron Moorhead) - The site promo only mentions "Creepy photographs, bizarre found films, mysterious caves, possibly supernatural forces at work, and too many twists and turns to mention." and stays completely away from giving any idea what the film is about. Clever and effective. Once again hopeful. 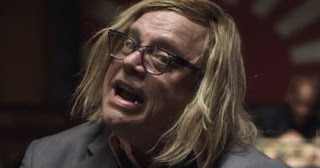 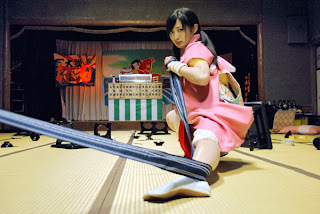 Dead Sushi (Noboru Iguchi) - "A vacation resort faces an attack of killer sushi". Yeah sounds fun don't it? But...But it comes from the same folks who brought us Robogeisha and I'm frankly tired of the goofy Japanese splatter gore. Then again, Iguchi had one of the best shorts in ABCs Of Death (with the very strange, scatological and funny "F Is For Fart"), so maybe he's figured out the right mix of humour and odd/freaky/blood-soaked imagery. 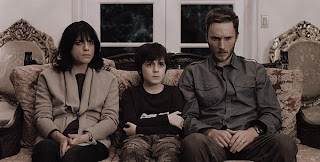 In Their Skin (Jeremy Power Regimbal) - "a young husband and wife and their son find themselves in a fight for their lives with another similar aged family who have taken them captive at their vacation home.". By itself, this isn't a premise that does a whole lot for me. Apparently it received some strong praise at Tribeca and Selma Blair is pretty much always good, so expectations are raised a bit. 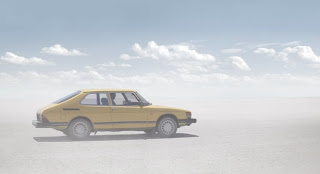 Wrong (Quentin Dupieux) - "an absurd crime thriller about a man and the very strange things that happen to him as he tries to track down his kidnapped dog.". By the director of Rubber. Say no more. Can't wait. 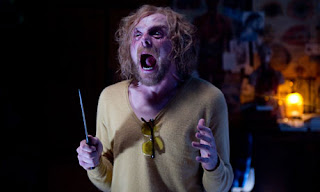 A Fantastic Fear Of Everything (Crispian Mills, Chris Hopewell) - "dark and quirky comedy about a very nervous writer played by fan favourite Simon Pegg struggling with a slew of mental demons while working on a new novel about Victorian serial killers.". This has all the initial ingredients: a great premise and a strong comedic actor in Pegg. The flip side is that these are first time filmmakers, but since I'm in a "benefit of the doubt" mood, let's assume they've been building up to this. 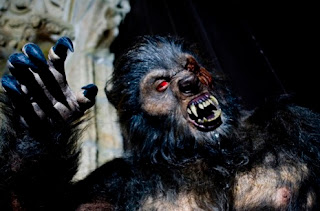 Game Of Werewolves (Juan Martinez Moreno) - "When a struggling young writer returns to his remote village home after years away in the city, he’s shocked to discover it’s become cursed by werewolves and also that he might just be the only one who can stop them.". You know what, let me just copy the rest of the promo info: "Fantastic old school effects, great werewolf fight scenes and kills, and an endearing misfit hero makes multiple Audience Award winner GAME OF WEREWOLVES an absolute delight for fans at every festival it plays!". Certainly sounds like they found the right film to close down the festival.
Posted by Bob Turnbull at 21:37