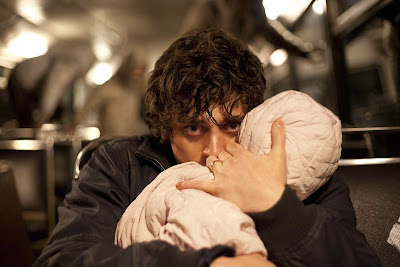 The easy read of Citadel is of the black and white revenge variety - "bullies will never change, so 'man up' and blow the bastards away". But it's never that easy is it? A single person's view of the world from their perspective just can't quickly be generalized - even if it looks slightly post-apocalyptic. In this case, the troublemakers in question are roving groups of kids dressed in the universal sign of the juvenile delinquent: the hoodie. They all come from one particular concrete slab of an apartment tower in the terribly depressing outskirts of a city in Ireland. It all looks very alien as the steets are essentially deserted, the cops never crack the perimeter and people live in their shells hoping not to be noticed.

Not an ideal place to raise a family...With the birth of their first child imminent, Tommy and Joanne are moving out of the tower, but on the final trip there Joanne is severely beaten and injected with drugs by the hoodie brigade. The baby survives, but Joanne is left in a deep coma. Tommy begins living in a perpetual frightened state becoming agoraphobic and not even really knowing how to bond with his growing child (he rarely even talks to her). In therapy, a doctor tells him that he pretty much personifies fear in the way he walks in a hunched, rigid fashion and how his face is frozen in a scared mask. With help from one of the social workers, he tries to function on a day to day basis, but he becomes more and more convinced that the hooded kids (who look very much like they're feral) are after his daughter. This is pretty much confirmed for him upon meeting a local priest who has a plan in mind.

The priest is accompanied by a young blind boy who counsels Tommy that the hoodies feed off fear and if you don't show it, they won't even see you. As the film goes on, it becomes more and more surreal - the kids look more creature like, the tower looms larger and everything seems to close in on Tommy. It's enough to make you question what you are really seeing and whether it's all part of Tommy's mechanism to deal (or not deal) with his situation. The overwhelming theme of the film is that we need to face our fears and have faith in ourselves, not simply internalize and avoid. Otherwise the walls start closing in. But it's not always that easy and the film makes that pretty clear.

It's also one hell of a scary movie. Whether you're a parent (talk about a worst case scenario) or not, the film keeps you in a constant state of being unnerved due to the surroundings, the extremely well created sound field and the always present sense of impending doom. Tommy's sunken eyes and colour-drained face often fill the frame and force you to put yourself in his position. It's terribly effective and not long before you feel yourself squirming in your seat. Though it conveys the darkness and dreariness of the rundown outskirts of city centres, the film itself is never dull and provides an engaging ebb and flow. Aneurin Barnard is utterly convincing as Tommy. You can't help but feel that this shoot must've been horrific for him - for all I know he had a blast, but his character's state of mind in the film is not one I would wish on many people and had to have been draining to live within for each take. Whether what we see is reality is besides the point by the end of the film. It's real for Tommy and his only way out is to face down his incapacitating fear. Not an easy task. 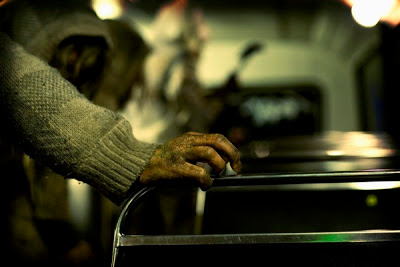