Toronto After Dark 2012 - "My Amityville Horror" 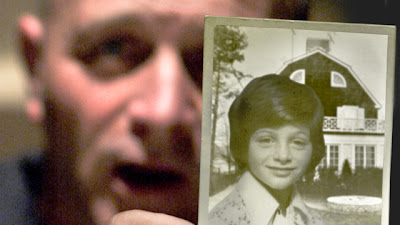 I was initially very skeptical when I heard that the documentary My Amityville Horror was to look back at the real life events that inspired the blockbuster 1979 film The Amityville Horror. How do you document word of mouth happenings and alleged paranormal events from 35 years ago? Would there be a litany of "experts" in these fields giving their "professional" opinions? I'll admit that I was worried it would be a frustrating experience and that the reason it was playing at After Dark was that it would likely have re-creations of some of these occurrences that were supposed to be ghostly in nature. The only way I thought the film could really touch on anything remotely interesting would be if it focused on the effect it all had on some of the people involved. Fortunately, that's closer to what the film gave us. In fact, it was quite an interesting portrait of one very broken man.

Though I love horror films about the paranormal (particularly ghost stories), I have little time for claims of actual paranormal activity in real life. Not a single bit of credible scientific evidence has EVER been found regarding any of these things, so the blatherings of psychics, ghost hunters and others who dabble in these fields are tiresome to me. It's not that I will outright state that these things could not possibly exist (how can I prove that they can't?), but I find absolutely no reason to believe that they do. Extraordinary claims demand extraordinary evidence, so I always wish more people realized that Occam's Razor can be your friend. Of course, I might tread lightly if that topic came up around Daniel Lutz...Now in his mid-40s, bald, stocky and with piercing eyes, Daniel was the eldest child of the Lutz family who lived in the Amityville house and claims to have experienced many of the strange happenings within it. And he's very adamant about it.

The "true" story behind Amityville is indeed frustrating to see in the documentary as we hear several tales of spirits and voices permeating the house from not only Daniel, but a few other folks who were there doing their own investigating. We meet some of these same people in the present day as well and it's an interesting cast - in particular the demonologist Lorraine Warren. Though she's quite sweet and appears genuinely concerned about Daniel (I can't imagine her being a fraud), she's also got numerous ideas about that house (and a variety of other things) that might make you think twice about her sanity. The meeting at her current abode is also one of the stranger moments in the film - due both to the incredible array of items she has displayed on her shelves and the reactions of Daniel. Is he playing things up for the camera? Does he think she's off her nut? Or does he find everything she's saying incredibly revelatory? It feels like all three sometimes. We also get to see some old talk show footage of George Lutz and his wife as they made their book tour rounds in the 70s and made claims about their terrifying time in that house on Long Island. George was the head of the household after marrying Kathy a few years previous and getting three step-children as a bonus. The film presents him as a rather ruthless step-father, a dabbler in the occult and definitely not a sterling example of humanity. We get many of these details from Daniel himself - the only remaining Lutz who is willing to talk. His mother and step-father have both passed away (mention of the latter's passing brings a smile to Daniel face) and his siblings wanted nothing to do with rehashing the story again. It certainly feels like the film had not initially intended Daniel to be the main subject all along, but whether they couldn't get anything else of interest or they just became somewhat seduced by his strong stern voice and hulking frame doesn't really matter. He's an intimidating package for sure, but still provides some fascinating stories that paint a much more detailed picture of himself and his family then they do of the events.

As we hear about his childhood with his family through several different interviews and learn about the abuse that occurred (both verbal and physical and before they ever got to Amityville), you can see how Daniel already had a rocky road ahead of him. But the spotlight of the media on his family and his step-father's desire to control his house and household led to young Daniel rebelling anywhere he could. This led to an early departure from his family to go it alone (when he was around 15) and, if you are to believe Daniel's expressions and grins as he leaves out details of his young adulthood, a whole mess of trouble. It's also somewhat difficult to believe everything he says about the house - not that he's purposely lying about everything since you really do get the feeling that he firmly believes he experienced strange phenomena in the house, but that some of it feels exaggerated. Whether that's for the camera or for himself is hard to say. In the end, it's hard to say anything about those events - as time goes by they become less and less interesting and whether they happened or not feels almost irrelevant. What is relevant is how it all affected a young boy's life and helped shape the man he became. Daniel probably wouldn't want our sympathy, but he does deserve respect for making it through - even if it wasn't completely unscathed. 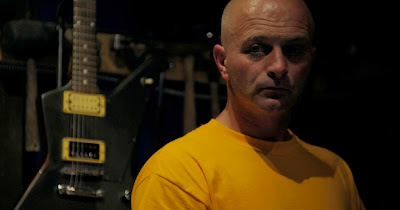