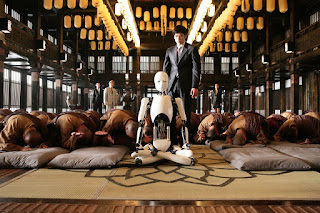 What better subject to use for an anthology film in 2012 than the concept of "doomsday" for the Earth? Korea's Doomsday Book (which won the jury prize for best feature film at Fantasia) tackles 3 different end of the world stories - each with a different root cause - and does so with style, humour and a sharp eye for satire. What it may have been missing was a script supervisor. With only the three stories, the film still runs close to 2 hours and seems to have trouble letting go of its ideas as it wants to fully explore every single nook and cranny. Fortunately, there are still numerous great moments that are discovered through these thorough explorations.

Pil-Sung Yim (Hansel And Gretel) directs the bookends of the film while Jee-woon Kim (I Saw The Devil, The Good The Bad The Weird) helms the centerpiece section entitled "Heaven's Creation". Devoted to the concept of androids achieving a higher consciousness, it's the most intriguing of the bunch and has a great central premise. An android bot which was initially supposed to be a servant at a buddhist temple appears to have attained enlightenment and the other monks see him as buddha. It prays with the rest of the monks and they seek advice from it, but they can't help wonder why it is different and call in a technician to the temple. While his diagnostic tests show it is functioning properly, his protocol forces him to report it up to the senior executives of the company. They feel the machine should be "put down" since it doesn't just execute orders given to it from humans, but instead ponders their requests. In other words, it does something it wasn't designed to do - think for itself. Though beautifully shot with some interesting back and forth debates between the business people and the monks, it hammers certain points home too hard and drags far longer than it really needs by restating what it had already done quite nicely. Having said that, the ending raises new questions and, even though it is open ended, is highly satisfying.

Yim uses a lighter touch for both "Brave New World" (a zombie story) and "Happy Birthday" (a meteor apocalypse story). The first of these two entries is a warning to us all that we can be at fault for letting new viruses and diseases get started (and containing a sequence reminiscent of Contagion that walks us through how a virus started to circulate among humans - it turns out this section was actually made in 2006, so there's no copying of Soderbergh's work). In this case, a family's incredibly irresponsible cleansing of their home (ie. none whatsoever) results in food being thrown into the recycle bins that has developed some rather disgusting new mold. When it is mixed in with the recycled waste, it then becomes part of a reconstituted feed for animals. The cows eat it and pass it right back to the humans who ingest the meat in restaurants - including the son of the parents who started it all. The sickness takes hold, but builds slowly within individuals even as it spreads fairly rapidly. There's a a mix of goofy humour with charm and it doesn't hesitate to take satirical jabs at how society would end up treating its population as well as how the Korea would react in the international realm. It runs what feels to be 5-10 minutes longer than it needs to in order to tie up its message and character arcs, but it was a solid way to begin the doomsday ideas.

The whole film winds down with "Happy Birthday" (initially conceived as a sci-fi musical take on O Henry's "The Gift Of The Magi", but retooled after financing fell apart) which was easily the strangest and funniest of the bunch. It begins with a young girl breaking and losing her pool-playing Dad's special eight-ball and quickly ordering a new one online. Two years later, a speeding meteor is headed for Earth and fear spreads that it may be the end of the world. Once it gets close enough for a good look, it appears to actually be a giant eight-ball. The girl also notices (via the images on TV) that it is engraved with the userid under which she ordered that replacement ball. As things spiral out of control across the planet, the girl and her family move to an underground bunker and try to figure out how to stop the delivery of the meteor. Set up as a child's own vision of an apocalypse (fear of reprisal at her initial carelessness, parents who always seem to be fighting and blaming each other), it takes the premise about as far as it will go - which is part of the problem. Even though it adds further humour to the already absurd situation (in particular through the news announcers at one of the networks), it still feels overly long. It's always a cause for celebration when the wonderful Doona Bae appears on screen, but in this case she shows up for the first time right when the film really should have been wrapping up. Granted, the last minutes do lead to a great final punchline, but, like the other films, it seemed to have been in need of tighter control of concept.

The execution of all the films is exquisite - the look, the acting, the satirical barbs, etc. - and the ideas are original and interesting, so it's easy to see why this won at Fantasia. However, it couldn't quite retain my full interest within each story. This is a book containing novellas that should've been short stories. And what great short stories they would've been. 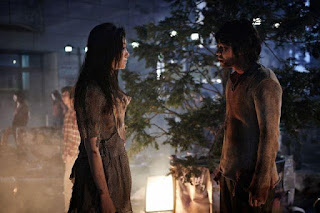 I like your blog post. Keep on writing this type of great stuff. I'll make sure to follow up on your blog in the future.
Establishing Serial Point-to-Point Connection