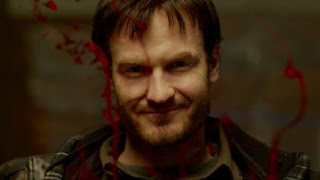 "A broken toy brain" is how director Charles de Lauzirika describes the main character in his feature film debut (after years of documentary experience including many DVD supplementals for major films - many of Ridley Scott's for example). It's a fitting description for Aiden as he starts flitting between fantasy and reality more and more and begins to have some trouble in distinguishing which is which. His reality is already a bit off as he works his job of photographing crime scenes and their gruesome results while living in the large ghost town of Detroit. He's struggling to stay afloat financially (he gets tips from his AA cop buddy - played by Ron Perlman - to come to specific crime scenes), but even more problematic is the constant push and pull of his own voices in his head. He sees so much injustice, but feels inadequate because he can never quite take the step to help.

Aiden starts imagining different scenarios of him saving the day and taking down the bad guys. The film doesn't distinguish between what's real and what's going on in Aiden's head, so the audience is always left trying to figure it out until it's made obvious which world we're in. This is used very effectively at one point in one of the funnier scenes of the film - after Aiden talks to his very pretty but much younger neighbour in the elevator and then beds her, we cut back to him outside the building and left assuming it was all a fantasy - but then we get a little surprise. The film is actually quite funny in several spots which serves to defuse the growing confusion in Aiden as well as add to the confusion of the audience at what we may really be seeing. Even though Aiden does start a relationship with his neighbour Virginia (Emma Lung in a very fine performance), he's still not quite able to focus and get things done. He's living somewhere in between his reality and fantasy and simply can't commit.

The "toy brain" analogy is particularly good when it comes to his relationship with Virginia. Though he's 35 and she's 22, he acts far more like a teenager - always wanting sex, saying the wrong things and, once again, simply not being able to focus. Virginia is confused too since she is just coming off a relationship with Ravi (played in greasy fashion by Edward Furlong), but at least she knows it. Aiden can't even keep his thoughts internally sometimes and blurts things out. In fact, it does become a bit hard to stay with Aiden as he stumbles from one thing to another - just when you think he's on the right track, he derails himself yet again - so it's increasingly difficult to continue to empathize with him. Though I was able to stay with him the whole way, I know several others who had issues.

The streets and buildings of Detroit are shot and framed so that the ghost town imagery comes to the fore - Aiden is really out there on his own. Everyone seems to live in run down warehouses, the streets are just about empty (even in the downtown core) and just about everything is in disrepair. It all pulls together to build a picture of how lonely, frustrating and difficult it must be to live in Aiden's head. The film never tips its hand obviously where it's going, so there's also that perpetual state of tension (which must also exist in Aiden day to day). With some wonderful cinematography from William Eubank (director of last year's lovely low-budget sci-fi Love - which also screened at Toronto After Dark), great characters and a sense of humour that ranges between playful and dark, Crave is an excellent step from de Lauzirika into features. Let's hope he continues to focus in that area. 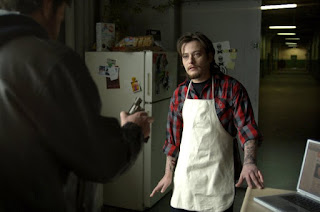