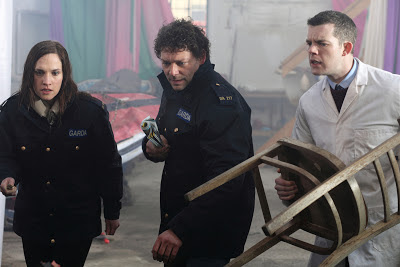 Grabbers is your quintessential creature feature. It's not the best one you'll ever see, but it a perfect example of the genre since it leans ever-so-heavily on what came before it. Let me be clear though, that's not a bad thing. It creates a solid premise with a new twist, characters you enjoy spending time with and borrows all the standard tropes in a loving way. Do you like Tremors and Gremlins and wish there were more movies using a strong combination of monsters and humour to keep you engaged? Well, now you have Grabbers.

The story is set on a small island off the coast of Ireland where a keen Garda (ie. a cop) named Lisa has been assigned for a two week stint. The two man police force will be down by 50% while the captain is off on vacation, so he requests her help to cover off the community just in case anything happens. Not that much ever goes on here, but his normal partner Ciaran is stuck in a bit of a cyclical drunk/hungover state of mind, so there's reason to worry about him being left solely in charge. Ciaran's not too happy about the situation and the "hate-at-first-sight" dynamic is off and running.

Soon after Lisa starts, though, several odd events occur: three fishermen go missing (in the opening scene of the film which shows us both the nature of the "grabbers" and where they came from), an array of dead whales show up on the beach, a few other people disappear under odd circumstances and Paddy the fisherman captures a tentacled squid like creature. Even with their different styles and arguments, it doesn't take long before the two cops start piecing things together. The turning point is when Paddy gets attacked by the creature he brought home and put in his bathtub. They've figured out that the beasts need water and blood to live (blood for food and water for their skin not to dry out), but when Paddy survives an attack because he was drunk, they realize that alcohol is poisonous to the slimy beast. So how do you protect the entire village while you try to take down the biggest of all the creatures? Throw an open bar party at the pub and keep everyone drunk.

If the humour isn't always as sharp or original as it could be and if all that setup doesn't always pay off perfectly, there's a great deal that works. Ruth Bradley brings a lot of charm to the character of Lisa and makes it totally believable that the grumpy Ciaran (also well-played by Richard Coyle) might get a bit smitten with her. As for the creatures (whose CGI never really gets too much in the way), even though tentacled monsters have been done often, there's enough tweaks and unique aspects to these to keep things interesting - particularly in how the biggest of them moves. By the time Gremlins is borrowed from openly for one particular scene, you'll likely be engaged enough that you'll welcome it with a smile on your face. A fine start to the festival. 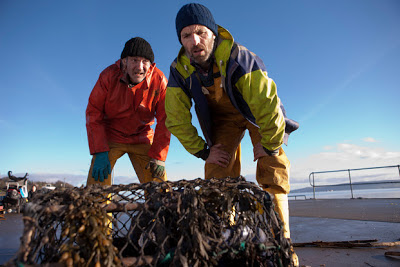