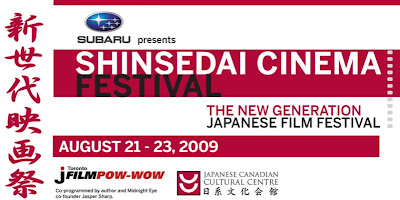 Just over one week to go...The Shinsedai Cinema Festival begins it's inaugural run on August 21st and the festival is focused on The New Generation of Japanese Film. The lineup (curated by Jasper Sharp of Midnight Eye and Chris MaGee of the Toronto J-Film Pow-Wow) looks extremely varied and really interesting, so I'm hoping to catch as much as possible over the weekend length of the schedule. Here's a link to the full list including short films and a breakdown of the full length films below:

At 8 months pregnant, Chinatsu begins a new job at a plastic factory. Her trainer Ritsuko has gone through a recent miscarriage, so you can imagine that there might be a few moments of tension between them. Slowly a friendship builds and the film sounds like one of those gentle and gradually revealing stories that rewards. 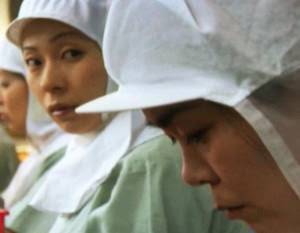 Experimental. Arty. WTF. If the trailer is accurate, these are all likely terms that may be bandied about after a screening of "Hottentot Apron: A Sketch". That's not necessarily a bad thing of course, since the film looks beautiful with plenty of interesting framings. The story follows a young woman as she enters into a fantasy world with a doll containing a large tumour located in the same spot as her own.

Young educated men and women who were forced to find menial labour jobs at low wages (after Japan's early 90s economic woes) are called "freeters". Director/Cinematograopher Hiroki Iwabuchi is one of them and this film is his document of what it's like living hand to mouth.

A "street level" view of the Iraq War that has won its director several awards already. The film had been culled from hundreds of hours of footage taken in Baghdad, Samawa, Falluja and Abu Ghraib and follows several different people and families recounting (via their own voices) their losses and personal views of the war. 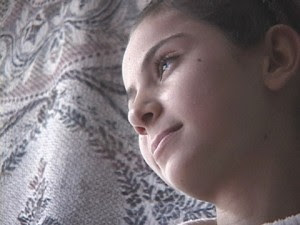 A 70 minute concert documentary of video artist and composer Takagi Masakatsu who has toured with Sigur Ros, David Sylvian and many others. He's also directed several music videos for Japanese artists and held many solo exhibitions of his work, so expect a visually rich experience to go with the music. 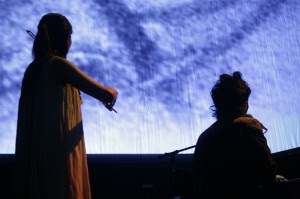 The short blurb at the Shinsedai web site describes this as reminiscent of a Japanese version of "The Wickerman". As long as they mean the original 1973 version, then I'm pretty much sold...A journalist is sent to track down his paper's missing photographer on Cantella Island (a licensed prostitution district) and encounters mysterious legends, stories and threats - including the legend of a huge fish that eats people's dreams. I love the look of this trailer... 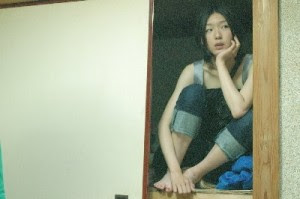 NEET stands for Not engaged in Education, Employment or Training and is used to describe that segment of the population who are essentially spinning their wheels. This debut film (made on maxed-out credit cards) shows what happens when one particular NEET is forced to integrate with the rest of mainstream society.

A documentary from 1999 focusing on the right wing views of punk singer Karin Amamiya. Her lyrics show decidedly anti-American viewpoints, but in front of the camera she begins to see things differently and this causes a rift in the band. Could be fascinating as long as it doesn't feel contrived. 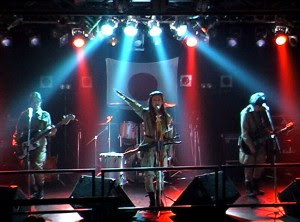 Saeko sounds like a typical teenage high school girl: dissatisfied with her current lot in life and not overly keen on spending much time with her parents - in particular her father. It's not just the crossdressing hobby or the fact that he runs a nail factory...She just doesn't like the guy. When he encounters the possibility of bankruptcy though, she is forced to help out. The trailer (even without subtitles) reminds me a bit of "Taste Of Tea" and this is one of my most anticipated of the bunch.

Email ThisBlogThis!Share to TwitterShare to FacebookShare to Pinterest
Labels: Shinsedai

will these films be subtitled?

Yes, absolutely...All films will be subtitled.