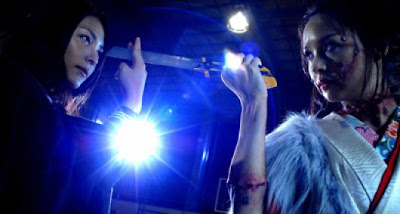 The makers of last year's carnage-filled, blood-drenched, special effects extravaganza Tokyo Gore Police have returned to the genre festival circuit with a romantic comedy. A carnage-filled, blood-drenched, special effects extravaganza romantic comedy. The film had many in the audience eagerly awaiting the first splatter moment Monday night at the Toronto After Dark Film Festival and they didn't have to wait long. Within 5 minutes, Vampire Girl had dispatched three separate opponents in bloody style (I'm talking geysers of red stuff) and stacked their deep crimson coloured skulls into a tidy little tower. Talk about setting a tone for your movie early on.

Yoshihiro Nishimura and co-director Naoyuki Tomomatsu have put together a story to go with the mayhem this time (Tokyo Gore was really all about the effects) and peppered it with a heaping helping of satire. There's not much point going into a lot of specifics about the plot since the title of the film is pretty self-descriptive, but there is a story behind it: pretty young Monami is the new girl at school, tries to woo one of the boys in her class and gets on the bad side of Keiko who has proclaimed herself as his girlfriend. The first half of the film is the setup (where we find out that Monami is a vampire and how Keiko becomes a Frankensteinian creation) and the second half is the battle. Strangeness ensues.

There's been some debate about Nishimura's films (he was also involved with "Machine Girl") as well as some others that are specifically produced for the North American market. They don't actually do well in their homeland, but get great fan response here due (at least somewhat) to the "crazy Japanese" tag attached to them (though they are also designed to mimic certain manga). I was worried and a bit annoyed when there was some giggling in the audience during the opening credits of the film as the production company names popped on the screen ("Pony Canyon", "Concept Film" and "Excellent Films"). It came across as "Oh, those crazy Japanese and their funny little company names...". The film, as flawed as it is in some spots, stands on its own though. It's honest in what it's going for, captures the spirit of those manga (at least to my eyes) and revels in its cartoonish gore (gooey fluids and dismembered body parts are everywhere). 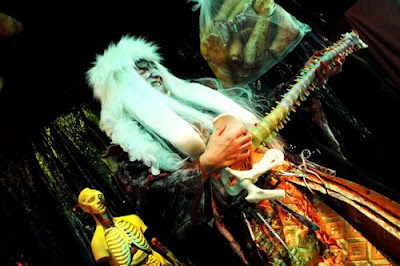 There's certainly some forced moments of over the top craziness and mugging for the camera, but there also some pretty brilliantly creative moments:


The problem with the film, though, is that it doesn't seem to quite know when to wrap up a scene or a gag. Both of the above described moments are plagued by excessive editing and an unwillingness to simply end. If "Singin' In The Blood" had been a single take of Monami dancing (without the needless edits to different sections of the same dance), it would've kept it's lovely quality. If the Saturday morning kids show riff had been shortened by half, it would have still got its point across without hammering it in. The entire run time is pretty much like that which makes it a bit frustrating. Two further examples are the girls clubs within the school: the Ganguro Girls (Japanese girls who try to be like African Americans by embracing their speech, clothing and any other forms of their culture) and the Wrist Cutters Club (one of their slogans: "Pay more attention to us!"). Both have funny elements and get in their jabs at the true-life teenage girls who wrap themselves up in odd obsessions, but the purposely offensive creations they've come up with just pummel home the joke to the point that it dilutes the satire. We really don't need the over the top facial contortions to go along with it.

In the end though, the film does achieve the fun sort of lunacy for which it aims. The story element holds things together more, they actually show some restraint in not pummeling you with their special effects too often in the early going and it provides some choice bits of humour and really surprising there's-no-way-I-could've-seen-that-coming moments. Frustrating, but still entertaining. 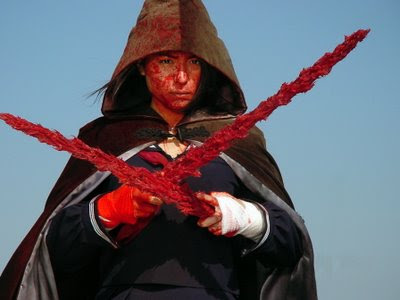 Geysers of red stuff! Geysers of red stuff! OOOO-EEEE!
I can't wait. That Singin' in the Rain parody sounds mind-blowingly awesome. That picture of the spine guitar is my new computer background. Sad to hear that it's got some flaws, but come on...a spine guitar! That's pretty much all I need from a movie. Zoom in and out like Wayne's World and I've gotten my money's worth.

Yeah, I think you'll dig it...B-) Have you seen "Tokyo Gore Police"? That should be right up your alley too - not as much humour, but lots of severed appendages creatively replaced by weapons. It wore out its welcome a bit, but the gun that shot fists was pretty damn awesome...

The Singin' In The Rain section isn't so much a parody - it just brought that film to mind...But it's still one of the best parts of the film.